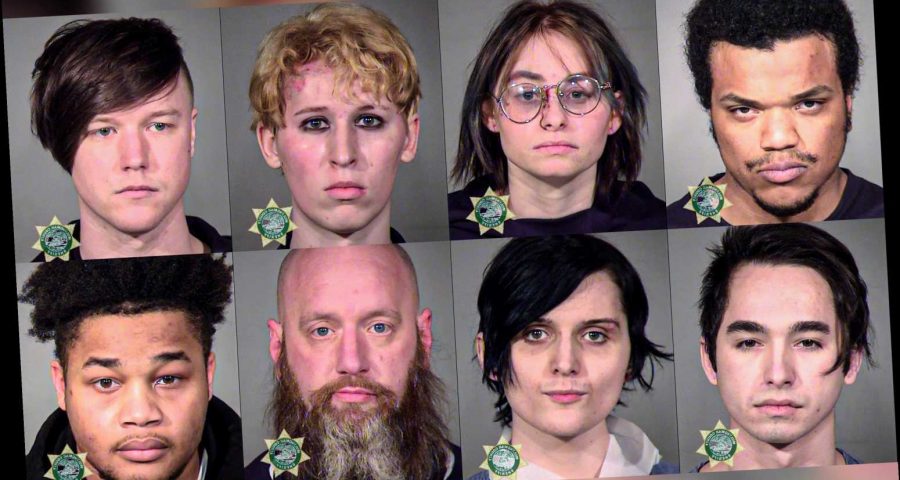 The nation’s capital was hard to recognize on Inauguration Day this year. In response to the Capitol Hill siege on Jan. 6, thousands of police and National Guard troops were sent on the streets of Washington, DC, where they manned checkpoints and set up barriers.

The predicted right-wing violence by Trump supporters never materialized. Joe Biden’s inauguration went off without a hitch. But in the Pacific Northwest, Antifa had other plans.

In Portland, Black Lives Matter-Antifa made good on their pre-announced “J20” (January 20) riot. Around 150 Antifa dressed in black shut down traffic as they marched unimpeded to the headquarters of the Democratic Party of Oregon. They held a large banner showing a Kalashnikov and the text, “WE DON’T WANT BIDEN—WE WANT REVENGE!”

They destroyed the offices by smashing its windows one-by-one using hammers and metal batons. They dragged dumpsters on the street and started a fire. Their comrades shielded them from cameras with large black umbrellas.

When Portland Police responded, they confiscated knives, batons, a crowbar, pepper spray and homemade firebombs from Antifa. However, most of them quickly dispersed into the neighborhood in small groups. Police only made eight arrests. Four of them had been arrested at Antifa riots in 2020.

Later that night, Antifa regrouped in southwest Portland where they chanted, “F– Joe Biden” while marching to the Immigration and Customs Enforcement facility. Dressed in riot gear, they brandished shields, batons and rocks. Federal officers used flash bangs and tear gas to disperse the rioters. Portland Police arrested seven, three of whom were also charged over riots last year.

For example, Justin Bowen, who was charged with reckless endangerment, attempted assault on police and other riot-related crimes, was arrested for the fourth time overnight. All his charges were dropped by morning.

It wasn’t only Portland that experienced Inauguration Day rioting. In Seattle, hundreds of Antifa shut down traffic in downtown as they trashed roads and started street fires. They smashed up numerous businesses and the William Kenzo Nakamura Court House. They assaulted a citizen on the street. Like their black-clad brethren in Portland, they used umbrellas to shield one another. Around 7 p.m., they marched to Seattle’s iconic Pike Place Market, where they proceeded to vandalize and loot the original Starbucks, a popular tourist attraction. Police only managed to arrest three suspects.

The planned political violence in Seattle and Portland on Wednesday should have generated front-page headlines. The state headquarters of a governing political party was severely vandalized in broad daylight — the second attack on a Democrat Party building in Portland since November. But because the attackers espoused the right politics from the left, they are conveniently ignored by mainstream media and politicians.

Some believe Antifa would fade away after Biden’s electoral win. They’re wrong. With the convenient excuse of resisting “Donald Trump’s fascist regime” no longer applicable, Antifa are just getting started.