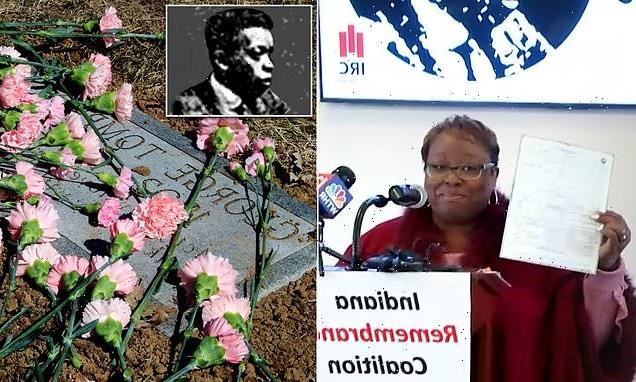 Death certificate of black lynching victim, 19, is finally changed from suicide to homicide 100 years after he was found hanging from Indianapolis tree with hands tied behind his back 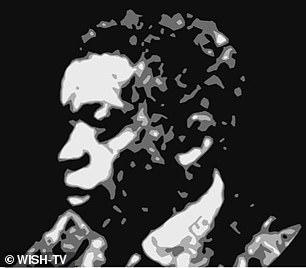 George Tompkins, 19, was found dead and hanging from a tree at Riverside Park in Indianapolis on March 16, 1922. The young man’s death was ruled as a ‘suicide’ even though the Marion County coroner at the time said that Tompkins ‘could not have hanged himself’

A black lynching victim’s death certificate has finally had its cause of death changed from suicide to homicide 100 years after he was found hanging from a tree with his hands tied behind his back.

George Tompkins, 19, was found hanging in Riverside Park with his hands tied his back on March 16, 1922, and last week The Indiana Remembrance Coalition announced it had successfully lobbied Indianapolis’s coroner to update Tompkins’ death certificate after a year-long campaign.

In a news release, it also said that the motive for Tompkins’ death had never been revealed, although members of the coalition think Tompkins’ killing most-likely had a racist motive.

Ranjita Brar, an Indiana Remembrance Coalition member told Fox 59 that Tompkins was from Kentucky and that he was looking to start his life in Indianapolis after living with his great aunt and uncle.

And after his death, the Marion County coroner at the time said Tompkins ‘could not have hanged himself,’ although his death certificate was still signed off as a suicide.

‘Some 100 years ago, someone in the coroner’s office made a decision that put history behind us in such a negative way,’ Marion County Chief Deputy Coroner Alfie McGinty said.

‘We will remember, we will bring justice to something that was unconscionable to me that 100 years ago something like this could have happened,’ she added.

*SCROLL DOWN FOR VIDEO* 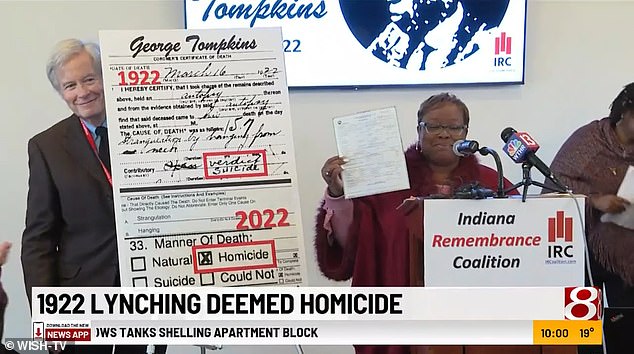 The Indiana Remembrance Coalition, who fought to share the truth of Tompkins’ death since last year, unveiled Tompkins’ new death certificate on Saturday after his cause of death was officially changed from ‘suicide’ to ‘homicide’ nearly 100 years after the young man’s death 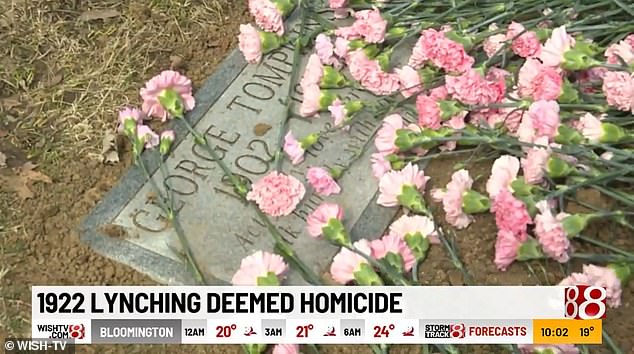 A gravestone in memory of the 19-year-old racial lynching victim was also revealed (pictured), 100 years after the wrongful filling was made

A new death certificate was unveiled at Floral Park Cemetery on Saturday, where a ceremony was held by members of the remembrance coalition. Tompkins’ death has now been officially ruled as a homicide, although no one has ever been named as a suspect or arrested for the killing.

A gravestone in his memory has also been uncovered at the ceremony.

Indianapolis Mayor Joe Hogsett, who attended the event, spoke of his anger that justice had come 100 years too late for both the local community and for Tompkins.

‘It should not have come to pass that Indianapolis officials labeled this clear murder as instead an unlikely and physically impossible act of suicide,’ Hogsett said.

‘I invoke the City of Indianapolis to remind us that though we may answer to God’s holy authority in the next world, it is a human authority that determines who gets justice in the here and in the now. It is up to public officials like myself and others to preserve and promote equal justice for all residents of our city… Indianapolis can and must acknowledge a more complete story of its own history.’

Tompkins’ death, which appeared on the front pages of Indianapolis newspapers in 1922, was just one of 18 lynchings reported to have taken place in Indiana between 1877 and 1950.

At the time, racial terror lynchings were common throughout the US, with most happening across southern states. More than 4,000 are believed to have taken place in southern states, according to the Equal Justice Initiative.

As of today, lynching is still not recognized as a federal crime across the country after powerful opposition from southern senators.

However, that may soon change after the Senate approved an anti-lynching bill last week. President Joe Biden is expected to sign the bill into law soon although a date has not yet be revealed.