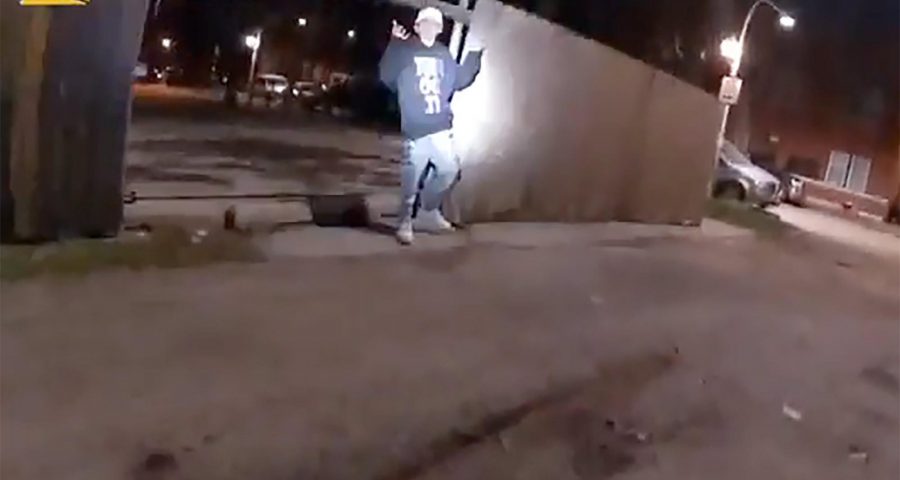 “Police, stop, stop right f—-g now,” Stillman is heard saying as he chased the teen down an alley. “Hands. Show me your f—-g hands.”

“Drop it, drop it,” the 34-year-old cop yells, before Toledo is seen turning around and the cop fires a single shot.

The seventh-grader, who appears to be raising his hands a split second before he was shot, is then seen collapsing onto the ground.

“You alright?” he asks the teen, who is splattered with blood. “Where you shot?”

Other cops then arrive at the scene, with nearly two dozen officers and supervisors ultimately there at varying points.

Police have said Toledo had a gun in his right hand when he turned around, and a weapon was found nearby after his shooting.

The graphic footage was released by the city’s Civilian Office of Police Accountability. Police in the Windy City has described the fatal encounter as an “armed confrontation.”

The shooting happened March 29 after cops responded to reports of shots fired in the West Side neighborhood.

“Hi, I just heard gunshots,” one 911 caller told the dispatcher, according to audio recordings of the call.

“How many shots did you hear?” the dispatcher responds.

Police said the teenager and 21-year-old Ruben Roman ran from cops at the scene, with the officers giving chase.

He then shoots the teenager, who is wearing a “Just Do It’ sweater and is seen still breathing but covered in blood.

“Need an ambulance got a gunshot victim,” Stillman radios in. “Shots fired by the police.”

The officers then start trying to resuscitate Toledo.

“I’m going to start CPR, I’m not feeling a heartbeat,” one of the cops says. “Get an ambulance.”

Officers on the scene spent several minutes trying to revive the teenager, but he was pronounced dead.

The officers were reassigned to administrative duty after the shooting, officials said.

At a press conference earlier on Thursday, Chicago Mayor Lori Lightfoot had described the video as “incredibly difficult to watch.”

“As more and more people see this footage, I want to ask again that everyone tuning in thik first about Adam Toledo,” the mayor said. “No parent should ever have a video broadcast widely of their child’s last moments.”

In a joint statement earlier in the day, Lightfoot and lawyers for Toledo’s family said the release of the footage was “the first step in the process toward the healing of the family.”