Boris Johnson apologised to business leaders for the introduction of new Government ‘diktats’ during the second coronavirus lockdown today and vowed not to extend the enforced closure of UK plc.

The Prime Minister delivered a short -pre-recorded video message to the CBI conference this morning after being forced to cancel a scheduled Monday slot after his plans for a four-week shutdown were leaked.

He told the conference today that the new lockdown, due to come into force just after midnight tonight and end on December 2, would not go on after that.

But his pre-recorded speech of around seven minutes made no mention of Brexit, despite the end of the transition period in under two months time.

Speaking from Downing Street the Prime Minister said: ‘I want to apologise to all of you who are experiencing the frustrations and the nightmare of the Covid world.

‘I know how tough it has been for you and I’m full of admiration for the determination you’ve shown in persevering through this crisis.

‘I want to thank you for the heroic efforts you’ve made to look after your employees, to make your premises Covid-secure, putting in Perspex screens, all the trouble you’ve gone to in complying with the kinds of diktats that I never believed we would have to impose which, I assure you, go completely against every free market instinct I possess.

‘And, believe me, we will end these autumn measures on December 2 when they expire.’ 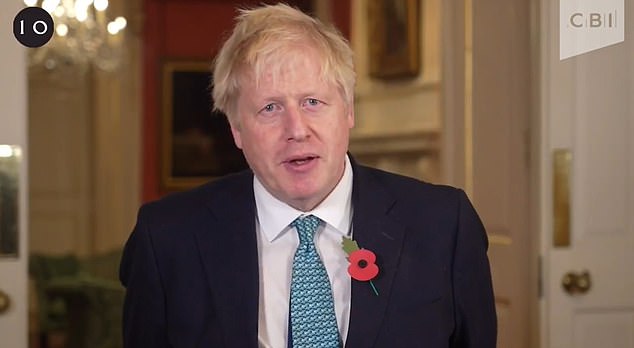 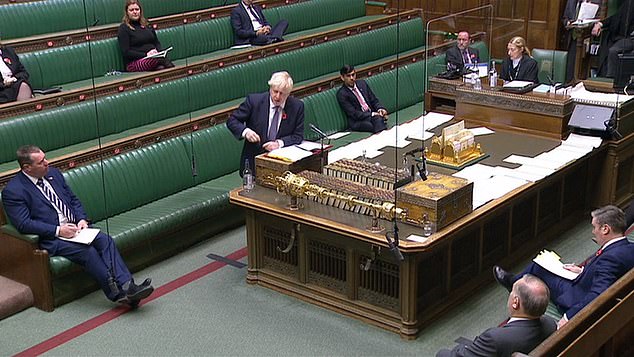 ‘It’s only through thriving enterprise that our economy will bounce back from this crisis.

‘The Prime Minister made it very clear he shares this view and that his door is always open to the CBI and business.

‘In return, firms will do all they can to help our country recover. They will step up to support communities, create new jobs for young people and accelerate the UK’s path to net zero.

‘This is a time for the partnership of a generation between business and government. Our door too is always open.

‘This next month will be a test of this partnership, bringing a collision of the twin challenges of lockdown and the end game on the UK’s trade deal with the EU. Let’s use this time working side-by-side to protect jobs, livelihoods and communities across the country.’

England’s Chief Medical Officer Professor Chris Whitty yesterday sparked hope that the second lockdown may be over by Christmas when he said there was a ‘realistic possibility’ the measures could be lifted on December 2.

During a grilling by MPs yesterday ahead of today’s vote, he argued there was a good chance England will have moved into a ‘different state of play’. And he said the goal was to ‘move into a series of tiers at the end of that period’.

But he admitted Number 10 would have to consider adopting different rules to ‘match the situation we see ourselves in at the end of this month’.

Asked if the new lockdown that comes into force from tomorrow would work, Professor Whitty told MPs in the Science and Technology Select Committee: ‘If people adhere to it in the way I expect they will, it will reduce R below one… It will make a huge difference.’

Around 10million people living in the North West and the Midlands are already under Tier Three, which bans socialising with other households and orders pubs to shut unless they serve substantial meals. Another 20million are under the second tightest bracket, which bans people from meeting friends and family indoors.

Boris Johnson is facing a Tory revolt on his national coronavirus lockdown in a crunch Commons vote today, with fears he will have to rely on Labour to get the plan through. But while Sir Keir Starmer’s backing means the PM is assured they will be rubber-stamped by MPs this afternoon, he is scrambling to contain a rising tide of anger on his own benches.

Dominic Raab today claimed England will resort to the whack-a-mole strategy of fighting coronavirus outbreaks when the national lockdown ends on December 2.

The Foreign Secretary admitted the blanket national intervention — which are likely to be rubber-stamped by MPs this afternoon during a crunch vote — was ‘reluctantly’ accepted as a last-ditch attempt to get a grip on the second wave.

Mr Raab stressed the economic implications had been considered before Boris Johnson announced the drastic move on Saturday night, amid dire warnings the NHS could run out beds within weeks and up to 4,000 people could die each day unless tough action is taken.

But he said: ‘We didn’t want to do it, we’ve reluctantly done it as a last resort, and come December 2 we will revert to the tailored geographically-targeted approach because economically that is less painful.’

Ministers have refused to fully commit to the end date in case the blanket intervention does not have the desired effect. The draconian measures, ordering people to stay at home and shutting non-essential retail, bars and restaurants for a month, are set to come into force from midnight.