UK could rip up rules on how foreign aid is spent so handouts serve our interests more, Boris Johnson says

BRITAIN could rip up rules on how foreign aid is spent as it seeks to ensure handouts better serve this country’s interests, Boris Johnson said yesterday.

The Prime Minister suggested the Government could stop following the international definition of what can be counted as aid.

Appearing before the liaison committee, he said the billions could be diverted so that at the same time as boosting international development they also help create more jobs at home.

The UK is legally committed to spending 0.7 per cent of national income on aid, with the bill surpassing £15billion for the first time last year.

But the rules on what is classed as aid are set by the Organisation for Economic Co-operation and Development. Ministers have previously faced resistance trying to alter the spending rules as any changes need the support of all 30 member countries on the OECD’s development assistance committee. 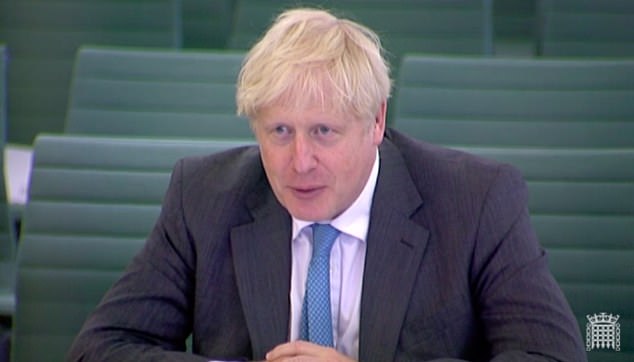 The Government is looking at the aid budget as part of its review of foreign policy, defence, security and international development.

Mr Johnson yesterday refused to rule out rewriting foreign aid legislation to get rid of the commitment to follow the OECD definition.

He told MPs: ‘I’m afraid I have to reserve my position on amending the act and go away and come back you.

‘What we certainly want to do – and it may not be necessary amend the act – what we want to do is to ensure that ODA (official development assistance) is better spent… that £16billion pounds worth of UK taxpayers’ money is better spent on serving the diplomatic, the political, the values of the UK, and indeed the commercial and employment, the jobs interests of the UK.’

Asked which countries could lose out from changes to aid spending, Mr Johnson refused to give details.

He replied: ‘Ah, well that is like asking a lion to choose between its cubs.. We aren’t going to get into the game of de-prioritising, I can’t tell you now which area of the world must therefore logically be subject to less UK [aid] because don’t accept that idea at all.

‘When I was foreign secretary we opened embassies around the world and that’s going to continue to be our approach. Global Britain has got to be more outward looking and engaged than ever before.’

Earlier this year Mr Johnson warned that ‘for too long’ UK overseas aid had been ‘treated as some giant cashpoint in the sky’, as he announced plans for the Department for International Development (Dfid) to be merged with the Foreign Office.

The aid budget is expected to fall this year because of the reduction in the size of the economy. Foreign Secretary Dominic Raab has already earmarked £2.9billion in cuts, but has refused to reveal publicly the details.