Britain concreted over green fields equivalent to the size of Dorset in the past 25 years, satellite analysis shows

Britain has concreted over an area of green fields equivalent to the county of Dorset in the past 25 years, satellite analysis shows.

And once farmland lost to urban development is included, the UK has built on land almost the size of Bedfordshire with houses, roads and other infrastructure in the same timespan.

The analysis was made by the UK Centre of Ecology and Hydrology (UKCEH) which used high-resolution data from satellites to measure the change in land use in Great Britain between 1990 and 2015. 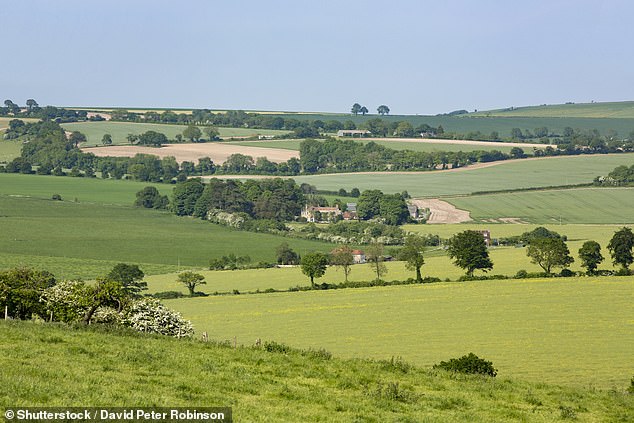 Britain has concreted over an area of green fields equivalent to the county of Dorset in the past 25 years, satellite analysis shows (pictured: Mixed farmland Hampshire)

The data also shows that 782 square kilometres (190,000 acres) of arable land for crops were lost over 25 years across Britain, mostly in Scotland.

In England, there was a significant reduction in land for farming crops in East Anglia, but increases in arable land elsewhere in the country.

In England, grassland was largely replaced by urban development, while in Scotland, there was a massive expansion in woodland at the expense of grassland and also arable farmland, with much less urbanisation.

In Wales, the picture was more balanced, with a similar increases in urban and woodland cover.

Overall, there was a net increase in woodland area of 2,021 square miles (5,236 km sq) – almost the equivalent of the size of Norfolk – with the majority of this increase in Scotland.

Dr Clare Rowland of UKCEH, who led the analytical study, said: ‘Thanks to sophisticated data analysis of high-quality satellite images, we have been able to produce the most reliable picture to date of the changes across the British landscape in recent years.

‘Our data show the scale of grassland loss in Great Britain not only to make way for urban development but also woodland expansion.

‘This information on how land cover in Great Britain has altered is crucial for understanding the impact of these changes on our environment, and helping us plan for the next 25 years.’

Dr Daniel Morton, who developed the software for the new UKCEH land cover maps, said: ‘Producing land cover maps annually will enable the tracking of the UK’s progress towards the net zero emissions target by 2050 and the success of national tree planting initiatives, as well as give us greater ability to monitor vegetation responses to climate and land use changes plus extreme weather events.’