LOS ANGELES (AP) — California will face its highest chance of blackouts this year as a brutal heat wave continues to blanket the state with triple-digit temperatures, officials warned Monday.

As people crank up their air conditioners, the state forecast record levels of energy use that could exceed supply Monday evening, said Elliot Mainzer, president of California Independent System Operators, which runs the state’s electrical grid.

The state could fall 2,000 to 4,000 megawatts of electricity short of its power supply, which represents as much as 10% of normal demand, he said.

State energy officials said the electrical load on Tuesday potentially could hit 51,000 megawatts, the highest demand ever seen in California.

The scorching heat and low humidity were further drying out brush and adding to the challenges of battling wildfires, said Anale Burlew, a deputy chief with the California Department of Forestry and Fire Protection.

Some 4,400 firefighters were battling 14 large fires around the state, and there were 45 new blazes on Sunday alone, she said.

In Southern California, two people were killed and one injured by the Fairview Fire, which started Monday near the city of Hemet, the Riverside County Fire Department said. Roughly 50 miles (80 kilometers) southeast of Los Angeles, the fire had quickly spread to more than 2,000 acres by 11 p.m., prompting evacuations, and was only 5% contained. Multiple residential structures burned.

CAISO on Monday evening requested the activation of temporary emergency power generators deployed by the Department of Water Resources in Roseville and Yuba City. The four generators, which were activated for the first time since they were installed last year, can provide up to 120 megawatts of electricity, enough to power up to 120,000 homes. 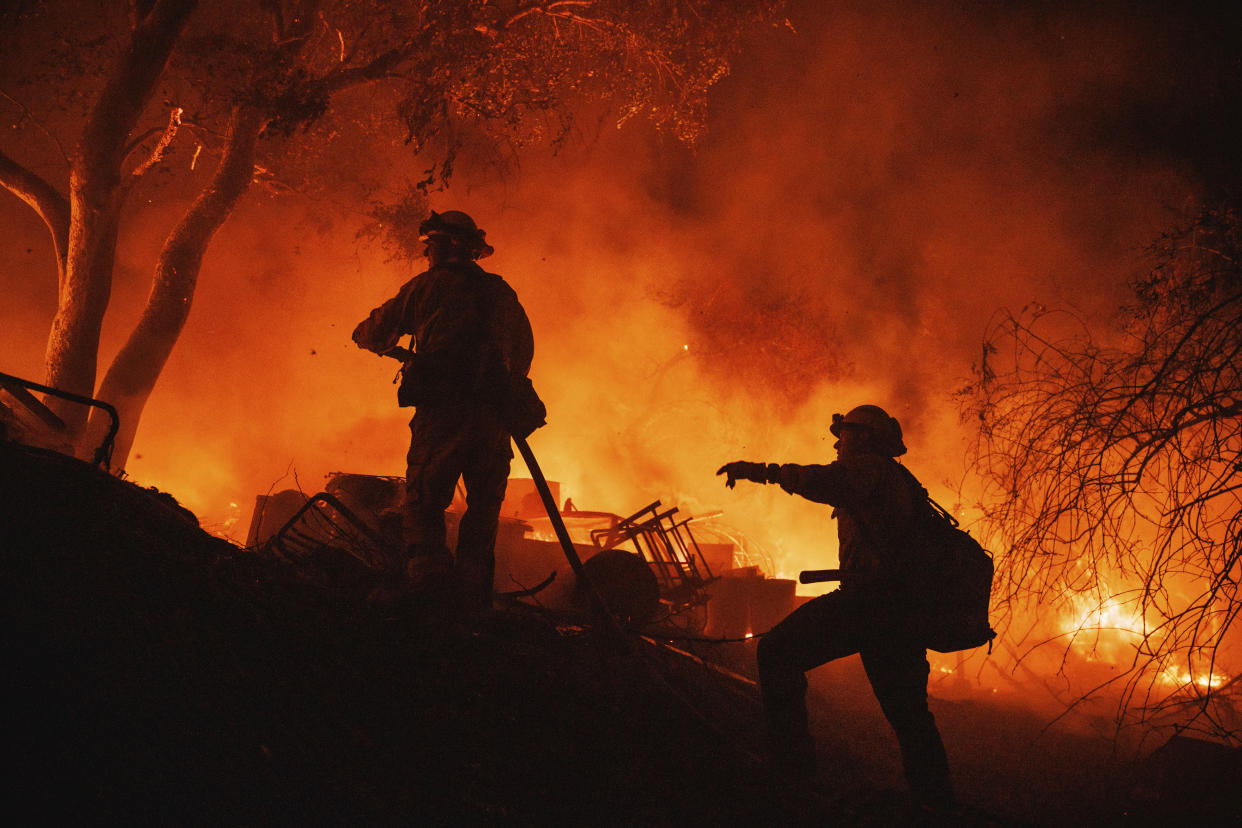 Earlier in the day, CAISO issued a Flex Alert call for voluntary conservation between 4 p.m. and 10 p.m. on Monday and for 4 p.m. to 10 p.m. Tuesday, making seven alerts in as many days. Consumers were urged to keep air conditioners at 78 degrees (25.5 degrees C) or higher during the period and avoiding using major appliances such as ovens and dishwashers.

The efforts have worked to keep the lights on “but we have now entered the most intense phase of this heat wave” that could last into the week, and two to three times the level of conservation will be needed from people and businesses, Mainzer said.

During the day, California’s energy grid runs on a mix of mostly solar and natural gas, as well as some imports of power from other states. But solar power begins to fall off during the late afternoon and into the evening, which is the hottest time of day in some parts of the state.

Meanwhile, some of the aging natural gas plants that California relies on for backup power aren’t as reliable in hot weather. 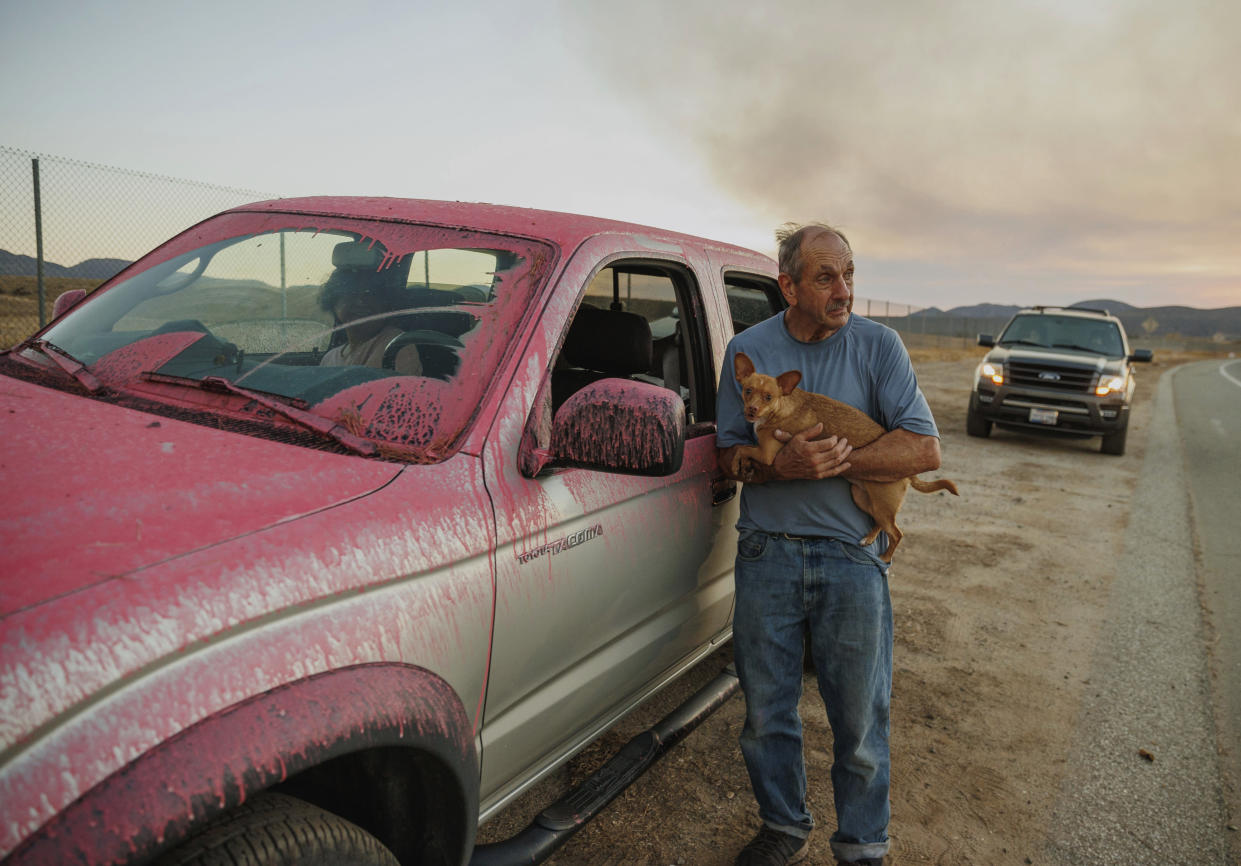 Ironically, unsettled weather also brought the chance of thunderstorms over Southern California and into the Sierra Nevada, with a few isolated areas of rain but nothing widespread. The storms also could produce lightning, forecasters said, which can spark wildfires.

South of the Oregon state line, the Mill Fire was 40% contained on Monday after killing two people, injuring others and destroying at least 88 homes and other buildings since it erupted last week, Burlew said.

The fire killed two women, ages 66 and 73, who were found inside the city limits of Weed on Friday after the fire broke out, the Siskyou County Sheriff’s Office announced Monday. Their names and details of their deaths weren’t immediately released.

The fire had burned 6.6 square miles (17.25 square kilometers) of grass, brush and timber but it wasn’t expected to grow and many evacuations had been lifted.

However a few miles away, the Mountain Fire was 16.6 square miles (43 square kilometers), only 10% contained and winds could renew its growth east in steep terrain, fire officials said at a Monday morning briefing. No buildings had burned.

Scientists say climate change has made the West warmer and drier over the last three decades and will continue to make weather more extreme and wildfires more frequent and destructive.