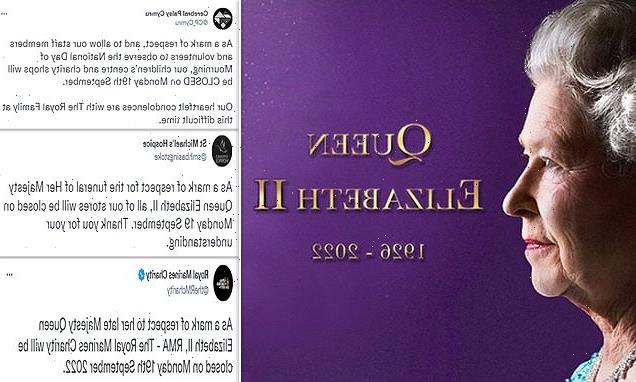 Charities, charity shops, support centres and helplines across the UK are closing as a ‘mark of respect’ to the Queen on the day of her funeral.

Many have criticised charities’ decisions to close, questioning whether it is what the late monarch would have wanted, while others say that volunteer workers deserve a day off ‘with the rest of the country’ on Monday, which has been declared a bank holiday.

Some hubs run by charities are closing for the day, including a children’s centre run by a Cerebral Palsy charity and a resource centre for families of autistic children.

The Royal Marines Charity, which runs a health and wellbeing helpline, also said it will stop its services for the day and directed those who might need help to the Samaritans and Combat Stress helplines.

Meanwhile, a peer support group for victims of domestic violence in Stockport announced it would close its offices ‘as a mark of respect for the Queen’ and to allow its volunteer staff to ‘pay tribute’ to the late monarch.

In another ‘mark of respect’ Asthma and Lung UK tweeted that it ‘chose to pause activity on social’. 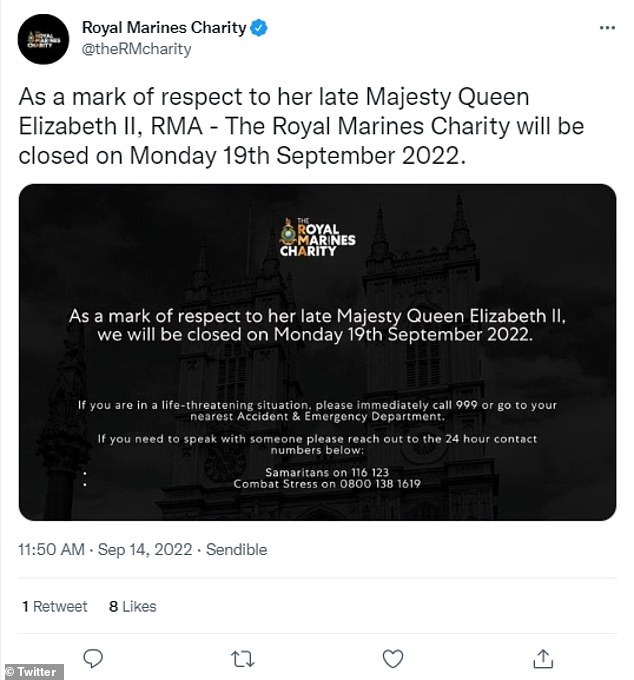 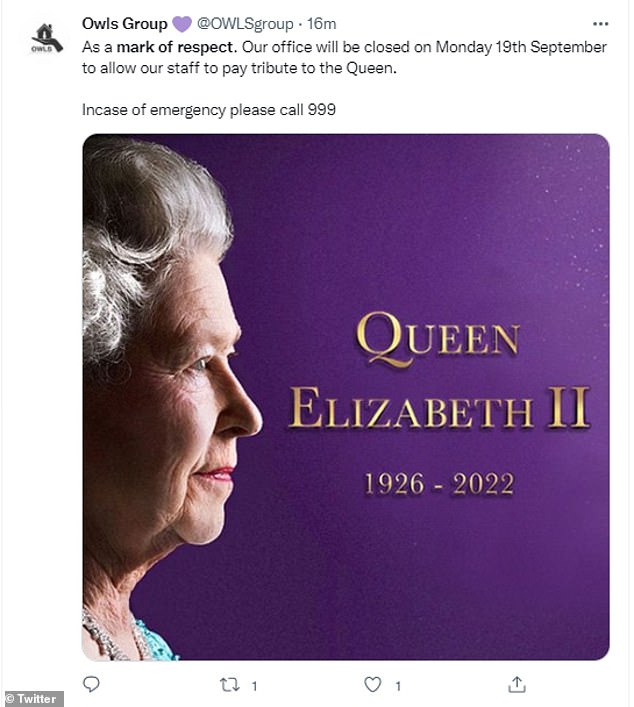 It added: ‘Rest assured, we’re still working for everyone with a lung condition and our helpline is here to lend an ear.’

Cerebral Palsy Cymru said it will close its charity shops and children’s centre on the National Day of Mourning.

St Michael’s Hospice in Basingstoke also said it would not be opening its charity shops. 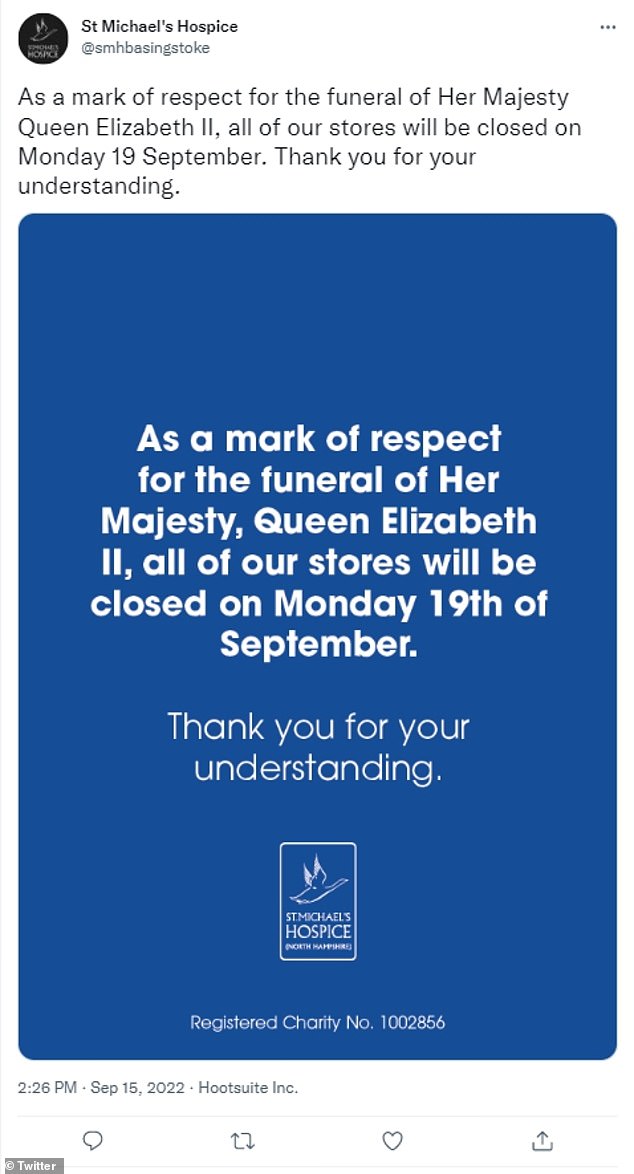 Like other retailers, many charity shops have also announced they are closing for the funeral

Hillingdon Autistic Care and Support also said it was closing its resource centre and tea rooms on the day.

It comes after some foodbanks around the country received backlash for announcing closures on Monday.

Many highlighted that they would normally close on a bank holiday and often have volunteer teams.

Like other retailers, many charity shops have also announced they are closing for the funeral. 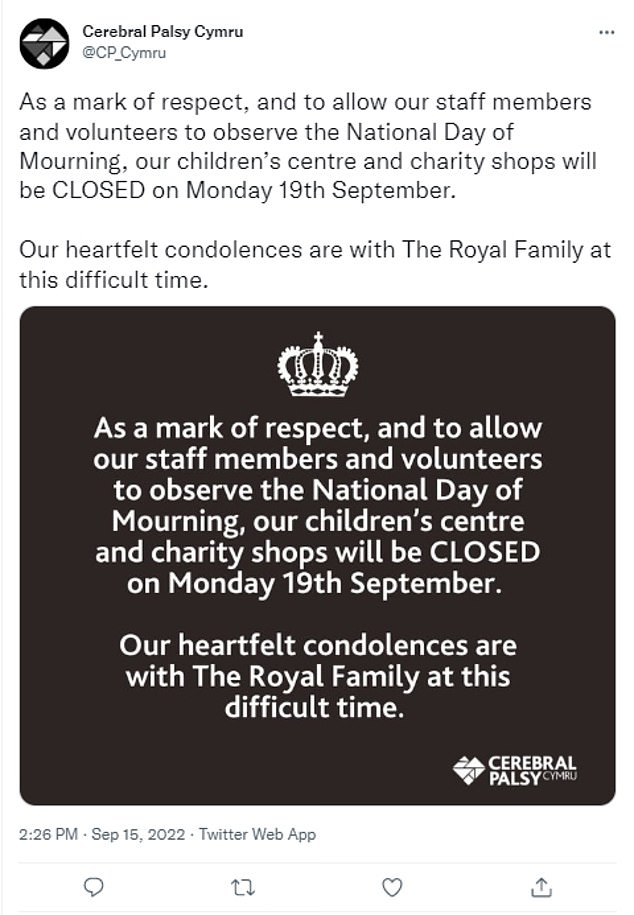 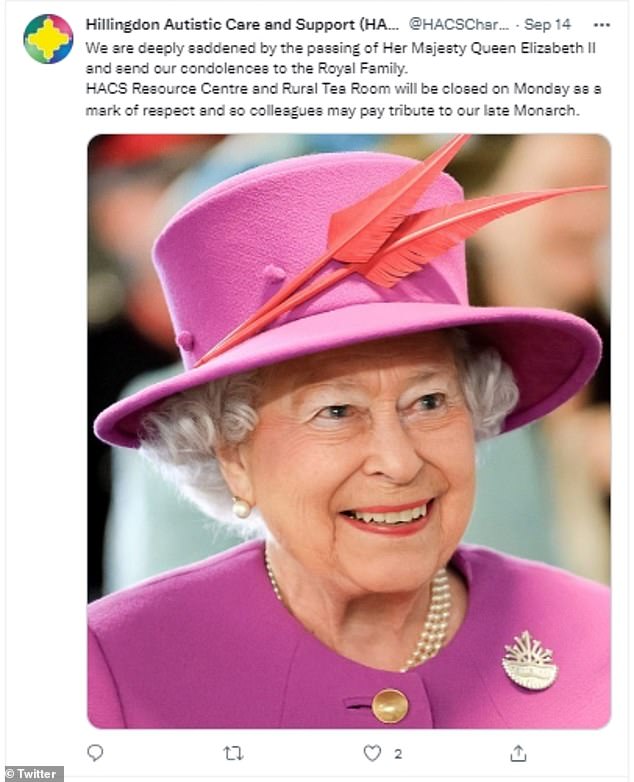 Official guidance leaves it up to businesses whether they stay open on Monday, which is a bank holiday.

Many on social media slammed charities’ decisions to stop their services for the day.

‘I simply cannot get on board with vital mental health charities and initiatives closing down for the day on Monday – sure it’s what she would have wanted. Sure,’ said one woman on Twitter.

Others suggested that it was wrong to say that they were closing for the Queen, but rather for the bank holiday, which is a national holiday that other workers will be taking. 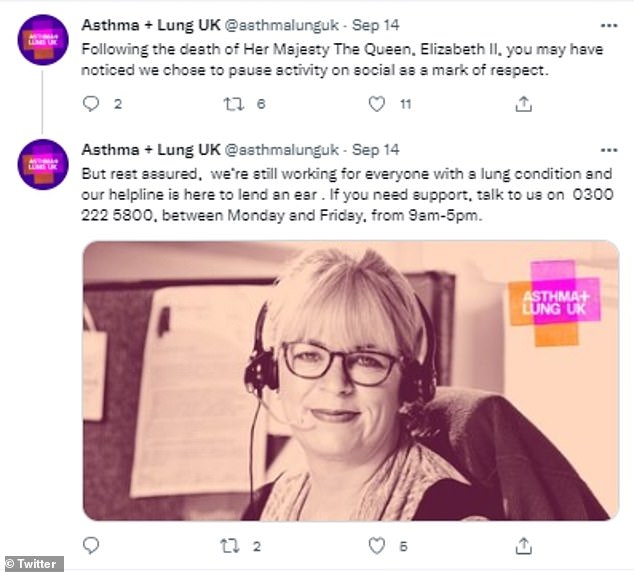 One charity worker posted a thread about why people should support food banks closing, giving hardworking volunteers a break. 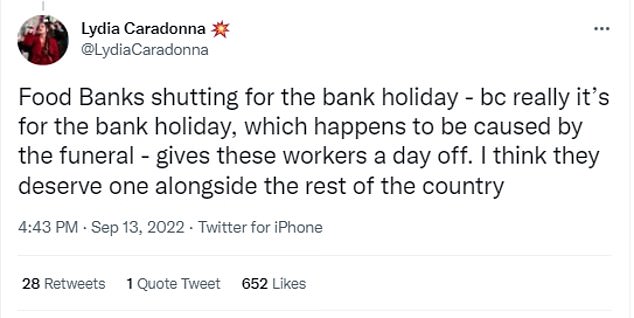 One charity worker posted a thread about why people should support food banks closing, giving hardworking volunteers a break

Another volunteer said that they would continue to work over the bank holiday.

‘We don’t get paid anything we’re all volunteers and we will be going ahead as we always do on Bank Holiday no disrespect to the Queen at all but people still need to eat,’ she said.

Another person pointed out that some have no choice but to close as school closures mean staff and volunteers will be unable to get childcare on Monday.

Earlier this week a food bank in Wimbledon, south west London, was forced to make a U-turn after its decision to close sparked a backlash.

The Trussell Trust, which runs a nationwide network of food banks, had to defend plans by some of its facilities to close.

Emma Revie, chief executive of the Trussell Trust, said in a statement: ‘Food banks in our network run sessions on different days and at different times.

‘Food banks are best placed to make the right decision for their communities and will ensure everyone who needs support can access it as they do with every bank holiday.’

Charities and businesses are not required to shut their doors, with many remaining open.