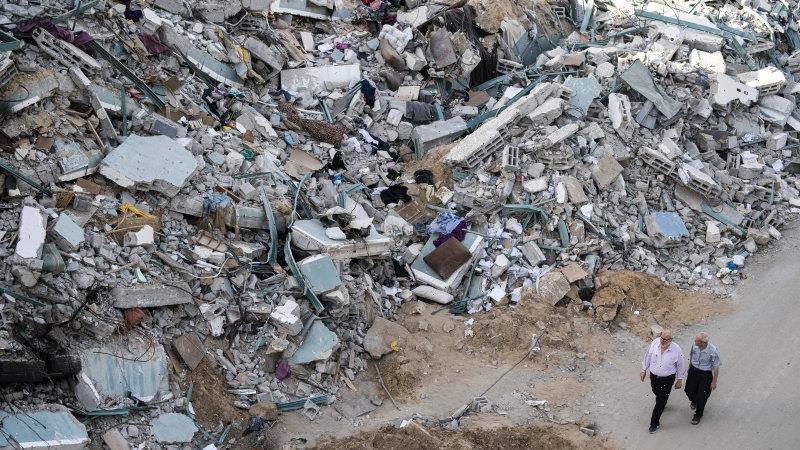 Gaza City: As the bombs stopped falling on Gaza for the first time in 11 days , Palestinian father Bassam Abdelaziz Al-Nabahin was counting the cost of yet another round of fighting between Israel and the Palestinian militants that run the besieged enclave.

Al-Nabahin was sheltering at Al-Shati school in northern Gaza, where he had taken his four sons, two daughters and wife seven nights earlier, as Israeli artillery and missiles landed around their home. 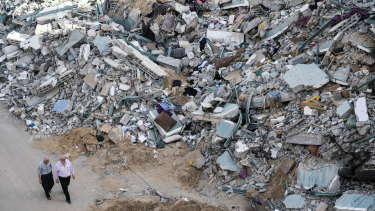 Strolling past the rubble following an 11-day war.Credit:AP

Since then, the family had slept on the ground in a classroom alongside a dozen other people, he said, subsisting on two meals a day of bread, cucumbers, tomatoes and cheese. “We left in a hurry without any of our clothes or possessions,” he said. “We didn’t have time to take mattresses or blankets like some of our friends.”

Like 40 per cent of Gazans, Al-Nabahin said he was unemployed, meaning that finding the money to repair the shrapnel-pierced tin-roof of his three-room home would be tough.

Still, he counted himself lucky. “No one was injured from my family,” he said. “We just pray to God to return back home safely.”

Many other families were less lucky. Gazan health officials say that 243 people were killed since May 10, including 66 children, with a further 1900 people injured, including 560 children.

Of the 91,000 people the UN estimates were displaced in the fighting, thousands are now homeless. Hamas says 1,447 housing units were damaged and 205 residential blocks completely destroyed.

Nazmi Dahdouh, 70, said the Israeli military destroyed his home in Gaza City in an air strike on Monday.

“We don’t have another home. I will live in a tent on top of the rubble of my home until it is rebuilt,” the father of five said. Gaza civil defence said it was working with what little means it had to remove the rubble and rescuing people yesterday, with emergency workers recovering five bodies and pulling about 10 survivors from the rubble of what appeared to be a tunnel.

The task was complicated by unexploded ordnance, “several hundred” pieces of which are strewn across Gaza, according to Fabrizio Carboni, regional director for the Near and Middle East at the International Committee of the Red Cross. 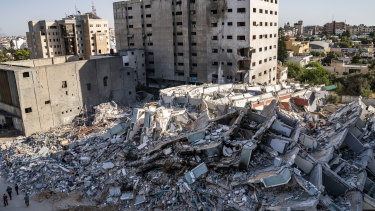 People walk past view rubble of the al-Jalaa building destroyed in a previous air-strike following a cease-fire reached after an 11-day war between Gaza’s Hamas rulers and Israel, in Gaza City.Credit:AP

On Friday, brief clashes broke out around Al-Aqsa Mosque in Jerusalem where similar scenes had touched off the Gaza conflict.

The confrontations died down within about an hour, with Israeli police retreating to positions at the compound’s gates.

The Gaza violence was set off in part by Israeli police raids of East Jerusalem’s Al-Aqsa Mosque compound and clashes with Palestinians during the Muslim holy month of Ramadan. Thousands had gathered there for Friday prayers, with many staying on to demonstrate in support of Gaza.

Rebuilding Gaza will pose a daunting challenge to Hamas, which has run the besieged territory since seizing power in 2007, with a reconstruction bill that could run into the billions.

Critical infrastructure like the power grid, hospitals and the enclave’s desalination plant also suffered damage during the fighting, while miles of roads and water and sewage pipes were affected. Power is now limited to three or four hours per day.

President Joe Biden has pledged US money to rebuild, with financial aid offering potential leverage over Hamas to give up its arsenal of rockets.

Anthony Blinken, US secretary of state, is set to visit the city shortly. With tens of thousands of Palestinians staying in temporary shelter at 58 schools with no social distancing and little in the way of protection against coronavirus, health officials warned these could turn into super-spreader centres.

Complicating matters is a shortage of medicine and damage to at least 30 health facilities, including one clinic fully destroyed. Crucially, a central laboratory that carries out testing for COVID-19 had been “made dysfunctional by a massive bomb explosion”, said Matthias Schmale, Gaza director for UNRWA, the UN aid agency for Palestinian refugees.

On the streets of Gaza City yesterday, life was fast resuming something approaching normalcy. Groups of middle-aged men were sitting on plastic chairs outside their storefronts, chatting. But the evidence of shelling is all over the city, whether it be the ravaged remains of a house or chunks of concrete and shrapnel on the roads. Children were clambering over the rubble of destroyed houses, treating it as a grim game.