Two Canadians tried in China on spying charges exchanged photographs of military equipment, according to a state-run Chinese newspaper, in one of the most explicit official statements on how the cases are linked.

Michael Spavor was an “informant” of former Canadian diplomat Michael Kovrig, and sent him the images “over a long period,” the Global Times reported, citing a person familiar with the matter. The materials were deemed “second-tier state secrets,” the nationalistic tabloid added. 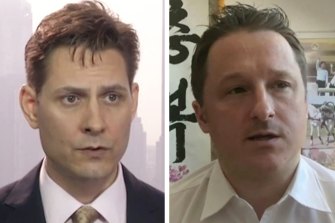 Entering China in 2017 and 2018 under the “guise of a businessman,” Kovrig gathered a large amount of information relating to China’s national security, according to the report.

Spavor, who arranged tours to North Korea, was sentenced to 11 years in prison last month by a court in northeastern China after being found guilty of stealing and illegally providing state secrets to other countries. The court said he will be deported, without specifying whether that would happen before or after his full sentence was completed. Spavor has appealed the conviction.

Kovrig, an International Crisis Group analyst, was tried in March on charges of spying on state secrets and is awaiting a verdict. More than 20 Western diplomats staged a public show of unity outside the courthouse in Beijing in an effort to draw attention to what they said was shared concern about the risk of arbitrary detention in China.

A Beijing-based diplomat familiar with the case dismissed the idea that Spavor and Kovrig were passing state secrets as a fabrication. The pair of Canadian citizens had a few beers together in Dandong, a city on the border with North Korea, said the person, who asked not to be identified due to the sensitivity of the charges.

Their cases have been closely linked with the US push to extradite Huawei Technologies Co. executive Meng Wanzhou from Canada. The men were taken into custody in December 2018, days after Meng’s arrest in Vancouver.