Joseph Wu told US Health Secretary Alex Azar in Tapei on Tuesday that Beijing had ramped up its coercion of its island neighbour.

“Our life has become increasingly difficult as China continues to pressure Taiwan into accepting its political conditions, conditions that will turn Taiwan into the next Hong Kong,” he said. 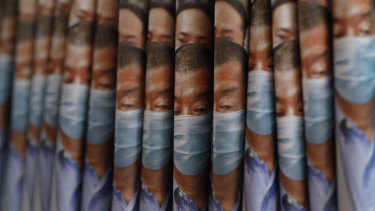 Copies of the Apple Daily newspaper with front pages featuring media tycoon Jimmy Lai are displayed for sale at a newsstand in Hong Kong. Credit:AP

Thousands of Hongkongers lined up at newsagents across the city on Tuesday morning to buy the Apple Daily tabloid after it was raided by up to 200 Hong Kong police on Monday over breaches of the Chinese Communist Party's new national security laws.

Investors piled money into its parent company Next Digital to push its stock up by more than 300 per cent on Tuesday. The show of defiance followed the arrest of Next Digital's founder Jimmy Lai, the billionaire media tycoon who has used his network to support the pro-democracy movement.

Two political activists including Agnes Chow, the co-founder of former opposition party Demositio, were detained on Monday night along with Wilson Li, a freelance journalist with Britain’s ITN network. Lai's sons and four other Next Digital staff were also arrested. 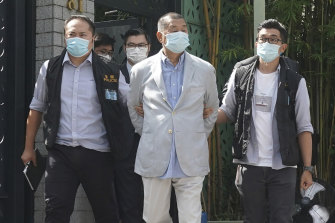 Hong Kong police said Chow and Li had been accused of “colluding with foreign elements” through their alleged involvement in a group that called for international sanctions on Hong Kong.

Police said Lai and Next Digital executives had been using foreign bank accounts. Lai, who was paraded publicly in handcuffs for the second time in two days on Tuesday, met US Vice President Mike Pence and Secretary of State Mike Pompeo in Washington in July last year at the height of the Hong Kong protests.

"It should be pointed out that no one is above the law," Hong Kong's Security Bureau said. "Anybody who violates the law must face justice regardless of his/her status or background."

Apple Daily vowed to "fight on" on Tuesday, dedicating its front-page to the crackdown. Chinese state media claimed Hongkongers had cheered Lai's arrest and labelled the outspoken businessman the biggest “black hand” behind the anti-Beijing protests that defined the city for more than 15 months.

“Under Xi Jinping, the Communist Party has long shown itself afraid of public opinion on the mainland, and is using the new national security law to try to smash Hong Kong’s independent voices and settle scores with longtime critics," he said.

The Australian government has been growing increasingly concerned about Hong Kong but has little practical leverage to influence developments.

Liberal senator James Paterson, the chair of the finance committee, said on Tuesday that the government had to look at consequences for the government of Hong Kong and the Chinese Communist Party.

“Australia doesn’t have great opportunities to have Magnitsky-style sanctions against political leaders,” he said. “But a parliamentary committee is inquiring into that right now and I hope that we will adopt that to allow us to individually sanction and target corrupt and human rights abusing officials.”

Wu told Azar on Tuesday that the Chinese Communist Party would now turn its focus to Taiwan. In a show of force, Chinese air force planes crossed into the Taiwan strait hours after Azar's first day of high-stakes meetings in Taipei.

“We know this is not just about Taiwan’s status, but about sustaining democracy in the face of authoritarian aggression," Wu said. "Taiwan must win these battles so democracy prevails.”

Azar's meeting with Wu is strategically significant and is likely to further anger Beijing, which maintains Taiwan is a renegade province that belongs to China.

Historically, the US and other allies have avoided sending or meeting with foreign or defence ministers in Taiwan to appease Beijing's "one-China" policy.

Azar, who is ostensibly in Taipei to discuss Taiwan's successful response to the coronavirus crisis, said on Monday he was representing the White House.

Washington has been pushing for a greater international role for Taiwan as it pursues multiple disputes with China over Hong Kong, the South China Sea and internet censorship ahead of the November US election.

Get our Coronavirus Update newsletter for the day’s crucial developments at a glance, the numbers you need to know and what our readers are saying. Sign up to The Sydney Morning Herald’s newsletter here and The Age’s here.