A worker at a Chinese hot air balloon centre has plummeted some 30 feet to his death on his first day in the job after being dragged into the air by accident.

The victim was allegedly pressing the basket against the ground when the lighter-than-air aircraft took off unexpectedly, taking him with it.

His company claimed he had not followed its procedure correctly, which caused the tragedy. He was pronounced dead by paramedics at the scene, his employer said. 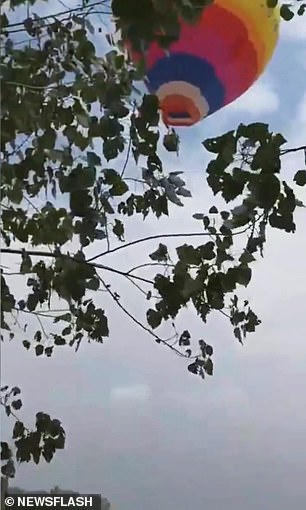 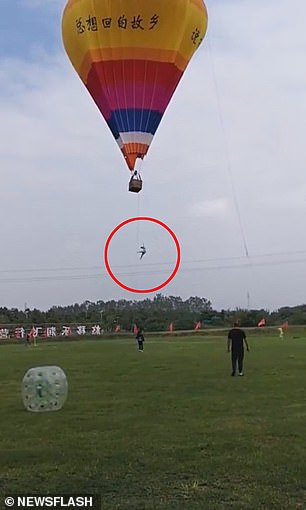 A Chinese university student working as a temporary worker at a hot air balloon camp has died after falling from around 30 feet high during his first day at work. Footage shows the man dangling from the side of the basket (left) before losing his grip (right) and falling fatally

The worker had desperately held onto the edge of the basket before losing his grip when the balloon was descending.

Footage on social media shows the man dangling from the side of the basket while travelling dozens of feet above the ground. He eventually fell, watched by screaming onlookers.

A spokesperson from Lexiang Aviation Sports Club, which runs the camp, told local reporters that the victim was a university student.

He was hired by the company as a temporary worker to guide tourists and handle on-land tasks during China’s eight-day National Day holiday, which started on October 1, the spokesperson told Red Star News. 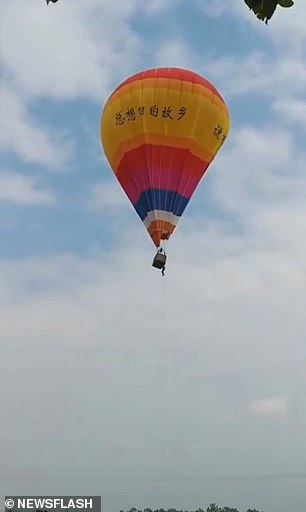 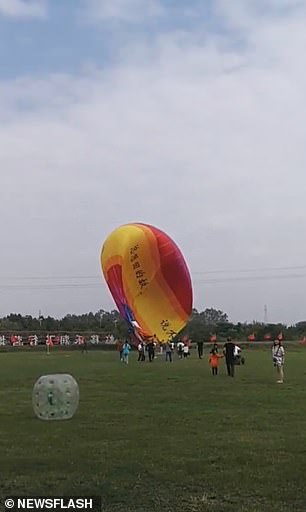 The victim was hired by the company as a temporary worker to guide tourists and handle on-land tasks during China’s eight-day National Day holiday, which started on October 1

The victim, who was to be paid 120 yuan (£13.7) a day, had just arrived at the camp and received hour-long training before the event occurred, his employer added.

It is said that the victim was pulled up by the balloon while using his hands to press the basket. He and other newcomers had been taught to do so during their induction.

The balloon suddenly ascended because all other basket-pushers had let go unannounced, the spokesperson said, and the victim did not notice that.

He stated that the new part-time workers had not ‘listened carefully’ during their training or followed the official process.

‘The members of staff in the basket did not notice him either. Therefore the basket floated, bringing the student,’ he noted, adding that the pilot tried to make the balloon go down as soon as they discovered the victim outside.

The company said it called for an ambulance one minute after the victim had fallen, and he was declared dead after failed rescue efforts.

The firm said it had expressed its condolences to the victim’s family and agreed to bear responsibility. The two sides are believed to be discussing a settlement.

It added that it would actively work with the police for investigation into the matter.