Washington: The notes, scribbled rapidly on a legal pad, captured the fear inside the White House when President Donald Trump raged over the Russia investigation and decreed he was firing the FBI director who led it: "Is this the beginning of the end?"

The angst-filled entry is part of a shorthand diary that chronicled the chaotic days in Trump's West Wing, a trove that the special counsel report cited more than 65 times as part of the evidence that the President sought to blunt a criminal investigation bearing down on him. 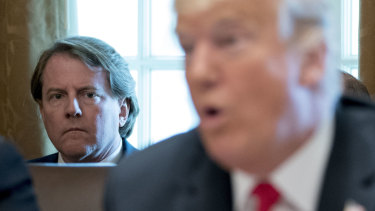 Her daily habit of documenting conversations and meetings provided the special counsel's office with its version of the Nixon White House tapes: a running account of the President's actions, albeit in sentence fragments and concise descriptions.

Among the episodes memorialised in Donaldson's notes and memos: the President's outrage when FBI director James Comey confirmed the existence of the investigation into possible ties between Russia and the Trump campaign, Trump's efforts to pressure Attorney-General Jeff Sessions not to recuse himself from overseeing the probe and his push to get Mueller disqualified and removed as the special counsel.

The Harvard Law School graduate's unflinching words – "Just in the middle of another Russia Fiasco," she wrote on March 2, 2017 – have cast the die-hard Republican in an unfamiliar role: as a truth teller heralded by Trump's foes for providing what they view as proof he is unfit for office.

House Judiciary Committee chairman Jerrold Nadler has already signalled that he intends to subpoena Donaldson as a critical witness.

Donaldson – who lives in Montgomery, Alabama, where her husband recently got a job as a federal prosecutor – did not respond to requests for comment. She left the White House in December, both proud of her service and also somewhat stung by her experience in Washington, friends said.

Those close to Donaldson fear she will be thrust in the middle of the building war between congressional Democrats and the White House. Some privately worry she could become a target of the President, despite having worked hard to help implement his agenda.

"My only concern for her now is not getting too caught up in this Washington meat grinder, when she really did the right thing and cooperated as she was directed," said former Republican senator Luther Strange, who hired Donaldson to work in his law firm in Alabama.

'Getting hotter and hotter'

As McGahn's chief of staff, Donaldson was charged with managing 30 to 40 lawyers in the counsel's office, getting White House policies legally vetted, keeping judicial nominations on track and working with McGahn on Trump's top priorities.

Along the way, she did what virtually all lawyers consider a necessity: kept a record of decisions, disputes, and tasks left to do. Nearly every day, when McGahn emerged from the Oval Office or other West Wing meetings, she would take notes as he recalled significant discussions with the President and his team, according to people familiar with her role.

In the case of Nixon, the discovery of his White House taping system provided unquestionable proof of his role in a coverup of his campaign's illegal spying on opponents, precipitating his resignation in 1974.

In Trump's case, Donaldson's notes depict McGahn and others as worried that the President could be accused of criminal obstruction – and as seeking to protect him from his impulses.

In an entry on March 21, 2017, Donaldson recounts how Trump told McGahn he was furious with the testimony that Comey gave to Congress about the Russia probe the day before, sounding as if he might fire him on the spot. The President felt betrayed that Comey had failed to do as Trump had asked: to tell the public that he was not personally under investigation.

"beside himself," she wrote of the President. "getting hotter and hotter, get rid?"

McGahn was so concerned that Comey's firing was imminent that the counsel's office drafted a memo analysing the president's legal authority to do so, according to the report. 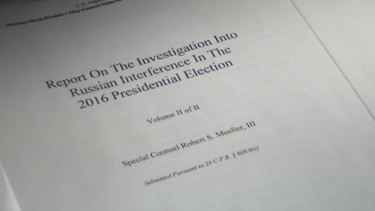 That day, Trump repeatedly pressured McGahn to get the Justice Department to intervene, Donaldson later told investigators. McGahn then called Assistant Attorney-General Dana Boente asking whether officials could "correct the misperception that the President was under investigation", the report said.

At one point, McGahn warned the President that some of the actions he took – such as asking Comey to let go of his investigation of Flynn – could make him vulnerable to accusations of obstruction of justice. "biggest exposure . . . other contacts . . . calls . . . ask re: Flynn," Donaldson wrote that day.

White House aides who know Donaldson said they are confident her notes are an accurate account of events in Trump's White House.

For her part, Donaldson is dismayed her confidential work product – documenting sensitive conversations with the President that would normally be shielded from public view by executive privilege – is available for all to see, colleagues said.

"I doubt she had any notion that these notes would ever end up in anyone's hands, let alone Mueller's," said one former White House official, who requested anonymity to describe internal dynamics.

White House advisers expect records of their confidential advice to the president to stay private, probably for decades, until they are released for historical archives.

"It is impossible to imagine that these extensive notes were taken for any reason other than to document questionable presidential conduct and the counsel's office response," Bauer said. "It speaks volumes to the extraordinary challenges facing lawyers in this White House, and it raises the question: If this is what is necessary for lawyers to do their job, then how is it a job the lawyers should agree to do?"

Friends and colleagues said McGahn trusted Donaldson, who worked as his associate at Jones Day, to make tough calls without him and to lead a team of deputies with their own impressive legal pedigrees.

He had once compared their work relationship to that of a football coach and a defensive coordinator, according to one colleague. They had walked through all the films and plays together for so long that Donaldson knew his mind.

As McGahn drank from a fire hose of meetings, deregulation debates and legal disputes, Donaldson was known for her careful tracking of small details.

She met McGahn each morning with a to-do list she wanted him to tackle, and she gave similar lists to deputy counsels and associate lawyers.

White House aides praised her ability to get the often prickly factions within the White House to respond to her requests. She sought to make sure McGahn was included in meetings in which some Trump advisers tried to avoid the lawyer's input. She displayed a quiet confidence, often speaking toward the end of a meeting rather than first, and made her points slowly and precisely.

"She has a true desire to get things done," her friend and former boss Katie Biber, who worked with Donaldson on the 2008 Mitt Romney presidential campaign. "She's not trying to get credit."

"Don may have been the White House counsel, but Annie is the glue that held this all together," she added.

There was one major exception to her low-key ways: Donaldson's red Corvette, an older model that once bore the vanity plate "RLL TIDE" in honor of her alma mater, the University of Alabama.

"The entire West Wing knew it was her car. It was always there," said one former administration official. "You'd walk in on a Saturday and see it: 'Oh yeah, Annie's already here.'"

Donaldson had the legal credentials to pursue a Supreme Court clerkship, but she was smitten with politics, friends said. She joined Romney's presidential campaign in 2007, and when he lost the Republican primary to John McCain, she applied to Harvard Law.

At Harvard, she served as both an editor of the Harvard Law Review and executive editor of its conservative sister publication, the Harvard Journal of Law and Public Policy, a bastion of the Federalist Society.

After graduating, she got a job as an associate lawyer at Patton Boggs, where she met McGahn. She worked for Romney's second presidential bid as a campaign lawyer in 2012, and then followed McGahn to work for him at Jones Day. There, she joined him in his work as legal counsel for the Trump campaign.

At the White House, Donaldson played a significant role in helping push forward Trump's judicial nominations; a record 30 were seated on federal appellate courts in his first two years, double the amount of any previous administration.

"Annie is going to go down in history as a real unsung hero of the judicial nominations process," Biber said.

But one nomination painfully singed Donaldson and her husband Brett Talley. Trump nominated Talley for a federal-district court seat in Alabama, but he was among a rare handful of nominees the American Bar Association rated "not qualified".

Talley, who was a deputy in the Justice Department's Office of Legal Policy, had never tried a case in court. He withdrew his nomination amid questions that he failed to disclose he was married to a White House lawyer on public forms asking if any of his family could create potential conflicts. Donaldson had recused herself from his nomination.

'What about these notes?'

After just eight months in the job, Donaldson would learn her notes were going to be turned over to federal investigators.

Trump reacted angrily when he learned from a news report in February 2018 that McGahn kept a written record of their encounters, according to Mueller's report.

"What about these notes? Why do you take notes?" Trump asked McGahn during a tense Oval Office confrontation. "Lawyers don't take notes. I never had a lawyer who took notes." (McGahn told investigators Trump was referring to Donaldson's notes, which the President thought of as McGahn's.)

McGahn responded to the President that he keeps notes because he is a "real lawyer" and explained that notes create a record and are not a bad thing, according to the report.

Trump replied: "I've had a lot of great lawyers, like Roy Cohn. He did not take notes."

In the end, the President's desire for the investigation to come to a close ultimately led to the release of Donaldson's precise description of events. In an effort to speed up Mueller's review, then-White House lawyer Ty Cobb embraced a strategy of turning over all the administration's records to Mueller.

McGahn privately warned that the approach would force him to divulge highly sensitive and privileged communications, and increase the chances that they would become public. His forecast proved true.