It has been, you would imagine, a strange few years to rule Britannia – and so you can forgive the Queen a rare moment of indiscretion.

The monarch was caught on microphone last week talking about the upcoming Glasgow climate meeting. She still didn’t know who was coming. “We only know about people who are not coming… It’s really irritating when they talk, but they don’t do.” Perhaps she was feeling left out. William had already weighed in. Charles was the most pointed, saying Glasgow was “a last-chance saloon”.

It doesn’t much matter what the royals think. What was interesting was the jarring sense that members of The Firm – better known for loving polo and small dogs – were suddenly acting like the politicians we wished we had. 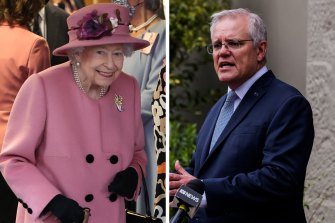 The Queen was not amused by those who were reluctant to attend the Glasgow COP26 summit. But Scott Morrison has now confirmed his attendance.Credit:Composite

So let’s talk about those politicians. There has been a sense, in the past week, of a limbering up in much of the media – getting ready to applaud the Prime Minister for finally bringing to a close a decade of climate policy farce. He alone, runs the general line, has been able to end the wars and usher in important policy.

This is, to be fair, the logical conclusion of much of the coverage of the past few years. Since Morrison won in 2019, there has been a sense in some parts of the media (no, not just the Murdoch press) that if he could somehow get Coalition MPs to agree on a climate policy then he would have done the impossible and the climate debate would be over – with less attention given to whether that policy would do much.

To put this another way, the government, on matters of climate, has been covered much like the press usually treats the royal family: as a permanent institution, to which there is no alternative, and in which tiny, almost meaningless changes (William did a podcast!) are to be treated as significant. If you think I’m exaggerating, remember that last week we managed to turn news that the Prime Minister will simply attend a climate change conference into a huge national announcement. (Though this decision makes a 2021 election even less likely.)

There is, of course, context for the media’s approach. The climate debate in Australia has been, let’s say, extremely difficult. But the decade-long insanity of the Coalition on this subject should not be treated as special dispensation. At times, it feels as though members of the press got together and decided to award a “most improved” medal. 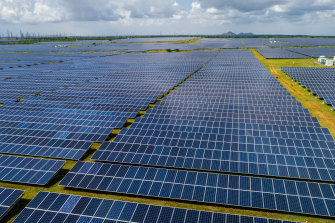 The Morrison government is warming to climate action policy.Credit:Getty

Changing your mind is no bad thing. And so this question, of how to treat massive backflips, is not always easy. And it is particularly important now because the government was joined, last week, by two of its prime barrackers – the Business Council of Australia and the Murdoch press. Both, we are told, are now in favour of strong climate policy. To give the rest of the media its due, it has been heartening to see most outlets remind readers of the BCA’s warning, just three years ago, that the targets they are now backing were – when Labor proposed them – “economy wrecking”.

Still, the change itself seems, to me, less interesting than two facts it points to. First, that influential organisations in Australia think they can get away with such brazen shifts – which probably means they can. There has been some mocking, but realistically, both will remain as influential as they are now. It’s almost as though, in public policy debate in Australia, you can say whatever you like and still be taken seriously.

Which is not to say that should be the case. This is the second point. When the government reaches its final position on climate, it is worth asking who is backing it. As others have suggested, if the organisations that have recently backflipped are – yet again – backing the government, that should probably be read as a sign that whatever the government has agreed on is not worth very much. 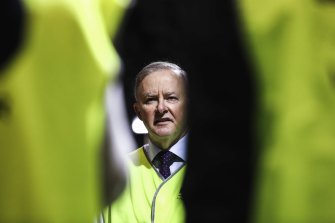 Anthony Albanese has allowed the Coalition to elbow its way into Labor policy areas.Credit:Dominic Lorrimer

Because at this stage, at least, what is Labor’s policy? There are some minor nuances, but in essence it is: we will do more than the Liberals, and we will tell you how much more later. It is hard not to at least wonder if Labor might be turning shy on climate just when events have finally turned its way on the issue.

The even greater political problem for Labor might be that Morrison is stealing its traditional arguments.

The pollster Peter Lewis has for years been pointing out that on economic management, the Liberals have an advantage; but when voters are asked about managing the economy “in the interests of working people” Labor has an advantage.

Where once the government held out to voters the hope that change could somehow be resisted, it is now arguing that change is inevitable and will smash our economy if we don’t act. As part of that argument, Morrison and Peter Dutton have begun to argue that the coal industry will shrink – not because of anything they do, but because other countries, like Japan and South Korea, will stop importing coal. The Coalition, Morrison says, knows how to protect those workers – in other words, the government is better at managing climate change in the interests of working people.

It’s a fine-sounding argument. Whether it is true will depend on whether the government is managing climate change at all. Simply reaching an agreement is next to irrelevant. What is that agreement? Does it mean serious action will be taken immediately? As we are all barraged with headlines over the next weeks we should remember what the Queen said: “It’s really irritating when they talk, but they don’t do.”