Maine: Confusing reports about the state of Donald Trump's health have intensified the focus on his physician of the past two years, Dr Sean Conley.

Conley’s cautiously optimistic pronouncements were contradicted by Mark Meadows, the White House chief of staff, who said that he understood that the US President's vitals had been "very concerning". It is not the first time that a physician to Trump has found himself at the centre of medical controversy. During the last presidential campaign, Harold Bornstein, then Trump's doctor, released a letter saying that he would be "the healthiest individual ever elected to the presidency". 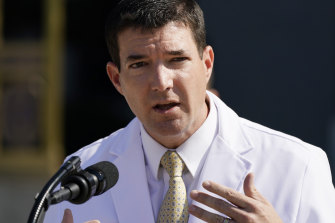 Ronny Jackson, who was the first presidential physician, also gave Trump a glowing medical testimony, saying he had "great genes".

Conley, who took on the role of presidential physician in March 2018, deemed Trump to be in "very good health" following a physical exam in February last year. Aged 40, Conley, a father of three who is married to a physician, is believed to be the first doctor of osteopathy to hold the position.

A graduate of the University of Notre Dame, he studied at the Philadelphia College of Osteopathic Medicine before becoming an emergency physician with the US Navy in 2006.

He later became the director of medical trauma at a Nato hospital in Kandahar, Afghanistan, where he received glowing reviews for his work, including being awarded the Romanian Emblem of Honour for saving the lives of a number of soldiers injured by a bomb.

As presidential physician, Conley was thrust into the public spotlight in May when it emerged that Trump had been taking the antimalarial drug hydroxychloroquine. While Trump hyped up the drug, which he had requested from his physician, medical experts voiced concern over its side-effects and questioned its use as a treatment for coronavirus.

In a White House memo, Conley wrote that, after discussions with Trump, they concluded "the potential benefit from treatment outweighed the relative risks."

The following month, a study in The New England Journal of Medicine concluded that hydroxychloroquine was ineffective.

On Saturday, Conley told reporters that Trump was not taking hydroxychloroquine.

The Walter Reed Medical Centre was contacted for comment.