A Melbourne business owner says he will have to lay off his own son after the state government made COVID-19 vaccinations compulsory at construction sites.

Peter Wishart said on Tuesday he was “devastated” at having to dismiss three employees – including his son – from the family window and door replacement firm Facelift For Homes because they chose not to be vaccinated. 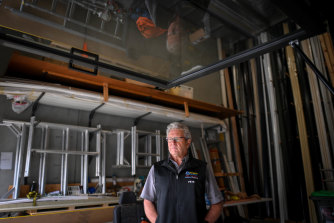 Peter Wishart, owner of Facelift For Homes, says his son believes the COVID-19 vaccines are not tried and proven.Credit:Eddie Jim

Mr Wishart, 65, has had both vaccination doses but said he respected other people’s right to choose whether to get the jab. The firm’s seven other employees are all vaccinated.

The Cheltenham business owner told Radio 3AW: “I’ve never cried so much in my life.”

Mr Wishart told The Age the government’s move had disrupted his retirement plans. He recently appointed his son – who did not want to be identified – as the company’s general manager and supervisor.

“Over the next two or three years I was going to gradually step back and hand over the reins to him,” Mr Wishart said. “If my son chooses – and I give him his right to choose – not to get vaccinated, it means that he … really can’t take over the business.

“I’m devastated at what I’m going to have to do because of what the government mandate.”

Mr Wishart said his son believed the vaccines were not tried and proven.

“He’s decided that until things are proven, he doesn’t want to get vaccinated and I’ve given him the right to do so. I’ve tried to convince him otherwise, but he said, ‘No, I choose not to be vaccinated.’ ”

Mr Wishart said the government should “definitely not” make vaccines compulsory and politicians were showing a lack of empathy.

“Why didn’t [Victorian Premier] Daniel Andrews mandate that politicians have to get vaccinated first? He hasn’t lost financially and all the cabinet haven’t lost any money.

“A lot of trade staff out there [who are not working] are getting $750 a week from the government, but that doesn’t even pay for their mortgage. But members of the government who are making these decisions … I know they’d be going through hell mentally. But they’re going through no financial problems.”

Mr Wishart said his business adhered to safety measures such as QR codes at the office and on worksites. He said Facelift For Homes was a family-run business that worked on people’s homes and so his son was out on sites quite often, installing windows and doors as a tradesman.