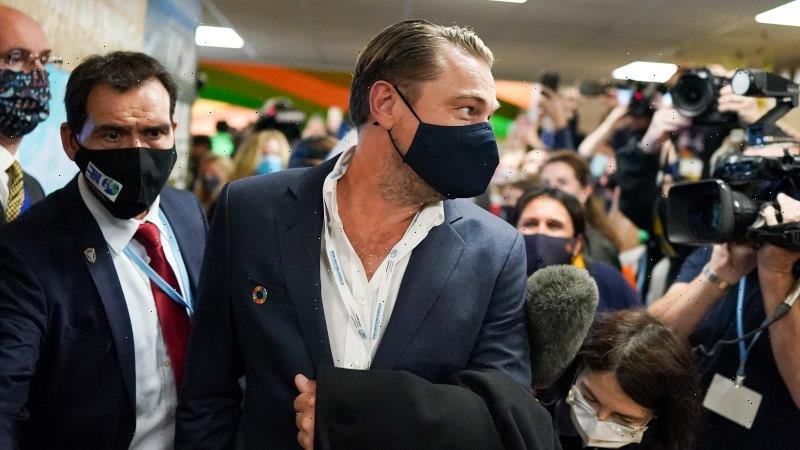 Glasgow: If hypocrisy could be harnessed as a renewable fuel source, the Glasgow climate summit might have a good chance of saving the planet after all.

For months now the gathering has been touted as the world’s last chance to get serious about climate change. But having been here for two days, it’s clear the event itself actually adds to the problem.

The brutal truth is that a serious gathering of world leaders and their negotiators has been hijacked by a grotesque mix of rent seekers, hangers-on and political wannabes. 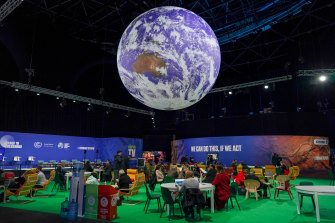 A giant globe hangs from the ceiling in one of the many event spaces at the COP26 summit.Credit:Getty

Some at least arrive with best of intentions, but their presence will have no impact on whether Glasgow ends up a success or failure and undermines the sustainability principles they repeatedly urge others to follow. The vast majority of the 30,000 attendees do not need to be here and the United Nations and United Kingdom should never have encouraged them to come.

This is not a summit in the traditional sense. In Glasgow, world leaders are only a small slice of a climate carnival best described as part-trade fair and part-public relations opportunity.

Nowhere is this more apparent than in a cavernous hall hosting dozens of unique ‘pavilions’ occupied by countries and organisations keen to spin a positive version of their climate credentials. Renting the space costs tens of thousands of dollars and construction costs hundreds of thousands more.

An uninformed visitor to many of these pavilions could be forgiven for thinking the host countries are saving the planet through innovation, when they are instead digging up fossil fuels and burning them at record rates. It is the definition of greenwashing. 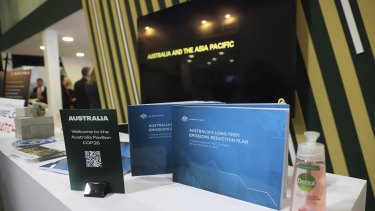 Some pavilions aren’t exactly beacons of environmental sustainability, either. The so-called Science Pavilion, hosted by the World Meteorological Organisation, Intergovernmental Panel on Climate Change and UK Met Office, features a long panel of 20 large television screens which display a glittering sign reading ‘You can make the change’. They are hardly leading by example. Qatar, a major fossil fuels producer, has a grand setup featuring models of energy-efficient stadiums to be used for next year’s FIFA World Cup. Why?

Australia has a pavilion, too, boasting glossy booklets, information on businessman Andrew Forrest’s green hydrogen crusade and details about a proposed cable linking a huge solar farm in the Northern Territory to Singapore. There’s also a large exhibit from oil and gas giant Santos spruiking carbon capture and storage, which has raised a few eyebrows.

The broader Glasgow venue is so big it takes 15 minutes to walk from one end to the other, and the United Nations and United Kingdom have accredited so many guests that a stack of temporary buildings – most made from white plastics – have had to be constructed to fit everyone in. Many have noted the alarming amount of plastic packaging at food stalls, although they are at least serving coffee in reusable cups. 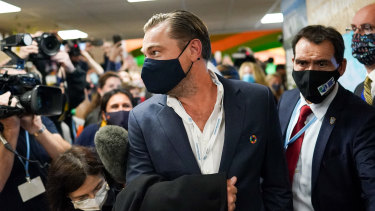 Leonardo DiCaprio is swarmed at the Glasgow summit.Credit:Getty

Elsewhere, celebrities dash around as if the conference is one giant red carpet. Hollywood actor Leonardo DiCaprio was chased by a huge throng of fans and press as he walked around in sunglasses to an indoor meeting. Amazon founder Jeff Bezos, the world’s richest man, triggered a wave of negative headlines when he flew into Glasgow on a private Gulfstream G650ER jet which reportedly cost him $65 million.

About 400 private planes – one of the most inefficient ways to travel – have flown to Glasgow over recent days. Prince Charles, a longstanding campaigner for the environment, also arrived by a private jet after being in Rome for the G20. “His Royal Highness has personally campaigned for a shift towards sustainable aviation fuel and would only undertake travel to Rome when it was agreed that sustainable fuel would be used in the plane,” a spokesperson explained.

The UK says the whole Glasgow summit will be carbon neutral because they will offset emissions by buying credits elsewhere. “Sustainability will be at the core of COP26,” a spokesperson says. The conference was designed with the help of a carbon management plan, but the UK has not released the document despite pledging to do so “shortly”.

Defenders will argue the excesses at COP26 are a drop in the ocean compared to the broader climate objectives the conference is trying to solve, and that is true. But would the summit really be any less successful if scaled back to core business? The bigger the circus, the less pressure applied to the main act: the leaders who have the ability to make a difference here.