West Melbourne residents are worried about traffic noise that will come from the West Gate Tunnel after a sound barrier they thought would protect them was removed from plans for the project.

A cut-and-paste error is being blamed for the fact the barrier was in plans the residents first saw.

Kim Burrell has lived in the area for 26 years and says she and other residents have been subjected to increasing levels of noise and pollution.

“I can’t believe that they have designed this without taking the opportunity to design some sort of sound barrier,” she said. “I think it’ll be unbearable. On the other hand, I know the reality is we will live with it because this is where we live.” 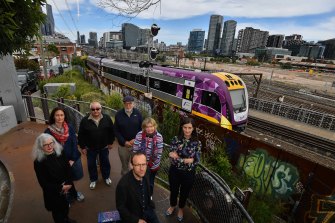 Residents are concerned noise from the section of West Gate Tunnel which will run parallel to Railway Place in West Melbourne will exceed 63 decibels, the level at which noise reduction barriers must be installed.

The West Gate Tunnel is designed to divert 9000 trucks off local streets, and residents fear it will add to noise in their neighbourhood and from the existing railway lines.

The residents initially thought a sound barrier was being installed because it was listed on the project’s publicly viewable interactive maps. But that plan has changed.

In an email seen by The Age, Hugh Perry, manager of stakeholder relations for the West Gate Tunnel Project, said the sound barrier was a cut-and-paste error.

“There are similar ‘noise wall heights’ disclaimers for the captions on images along the West Gate Freeway, and it looks like this has been copied over to the Railway Place image in error,” he said in the email.

The $6.7 billion West Gate Tunnel is being built by the Victorian government with tolling giant Transurban, which earlier this year confirmed the cost of the project had blown out by $3.3 billion.

A West Gate Tunnel project spokesman said there were strict noise limits in the design and construction of the Wurundjeri Way extension.

“Noise modelling shows these limits can be met without noise walls,” he said. “During the planning phase for the West Gate Tunnel project a general disclaimer in relation to noise walls appeared on the project’s online interactive map, but that does not mean there was a commitment for noise walls to be built.”

However, residents are concerned the noise predictions don’t account for the racket that comes from the adjacent train lines.

The residents’ campaign to get the barrier built has attracted the support of Greens politicians Adam Bandt and Ellen Sandell, who wrote to the Major Transport Infrastructure Authority.

“Labor is putting cars and trucks ahead of people,” he said. “Residents will soon be in spitting distance of both a busy rail line and a freeway which means excessive noise, health impacts and disrupted lives.”

“We know that traffic noise is an important matter for residents and that is why strict noise limits were set during the West Gate Tunnel project’s planning and environmental approvals processes,” the spokeswoman said.