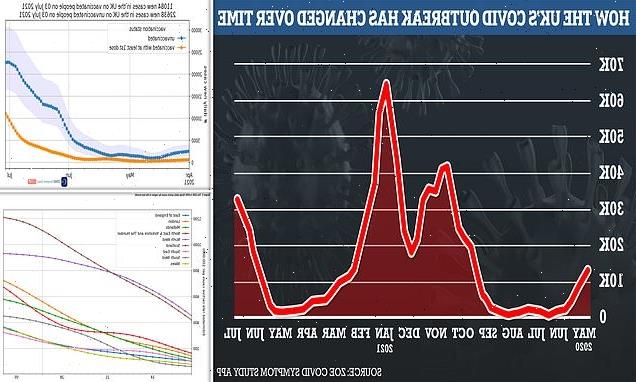 UK’s Covid crisis is already ‘slowing down’ and majority of 33,000 daily cases are still among the unvaccinated, symptom study claims

Covid is ‘not done with us’ but there are already signs the third wave is slowing down, one of the country’s top experts revealed today.

Professor Tim Spector, who runs Britain’s largest Covid symptom tracking study, said there were 33,000 people falling ill with the virus every day last week — up by a third on the previous seven days.

But it is the second week in a row that cases have risen by a similar amount, prompting him to believe that data suggests the third wave may already be slowing down.

Outbreaks in Scotland and the North West of England —  regions which quickly became hotspots for the Indian ‘Delta’ variant — have plateaued, estimates suggest, and in the East of England cases are already coming down.

More than two thirds of daily cases are now among Britons who have not been jabbed. Cases appeared to be rising quickest among the vaccinated, but experts insisted they were still suffering a mild form of disease like a ‘bad cold’. Official figures show more than eight in ten adults have received at least one dose so far.

Professor Spector, a King’s College London epidemiologist, warned that the peak of the third wave was still to come. The Government admitted this week that it anticipated more than 100,000 cases per day at the peak in August.

‘While the rate of increase seems to be slowing down, we’re yet to reach the peak of this latest wave,’ he said. ‘Even though we’re doping away with Covid restrictions in the UK, Covid isn’t done with us.’

Professor Spector warned that every day 500 Britons were developing long Covid, which sees symptoms linger for weeks or months after the initial infection. He urged young people to get vaccinated to prevent the often debilitating condition, even though they are at low risk of severe illness from Covid itself.

Separate figures from Test and Trace published today show infections surged by more than 70 per cent in the last week of June, with 135,685 new Covid cases spotted.

There are concerns that England’s success at Euro 2020 could push infections up further before the July 19 unlocking. Hundreds of thousands of fans abandoned social distancing and mask wearing last night following the Three Lions’ semi-final victory against Denmark.

An Imperial College London study also published today predicted cases are now doubling every six days, faster than No10’s own estimates, and could hit 100,000 a day before Freedom Day later this month. The researchers claimed men gathering in pubs and homes to watch the football tournament were driving the surge. 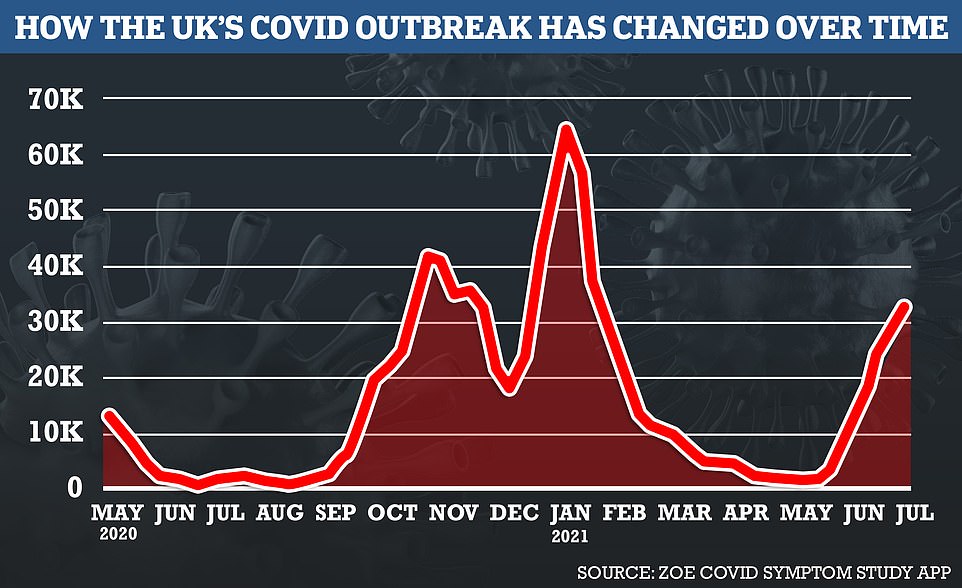 King’s College London scientists estimated there were 33,000 new symptomatic infections a day last week, the second time they had risen by a third in two weeks. Professor Tim Spector said the results suggested the outbreak may be slowing 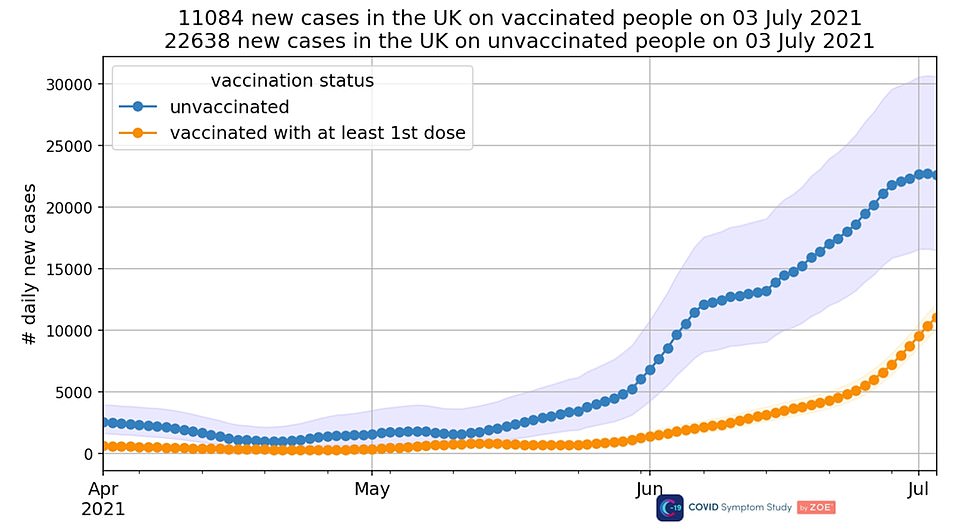 Data from the app showed there were signs cases among the unvaccinated (blue line) may be plateauing. Ministers are relying on a ‘protective wall’ from vaccines and immunity from previous infection to beat the virus 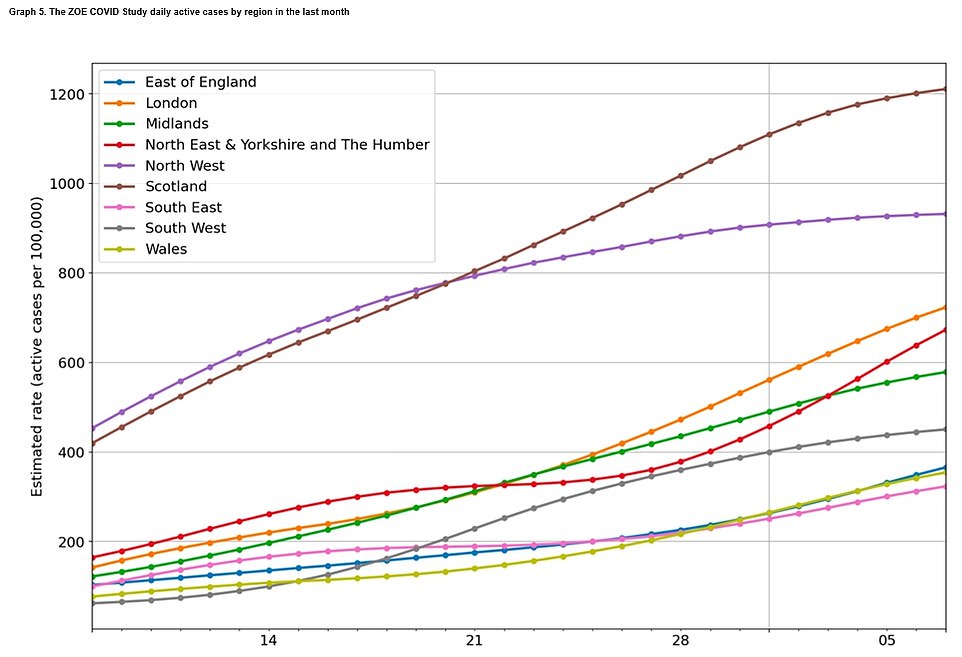 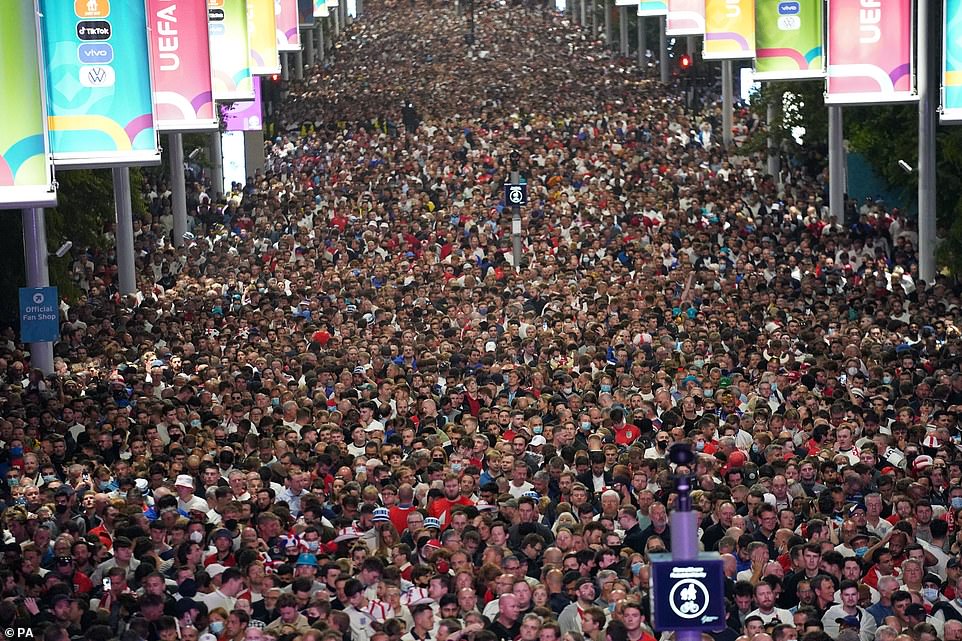 But with England now gearing up for glory in the final against Italy on Sunday night following last night’s nerve-shredding extra-time victory over Denmark, there are fears infections will continue to spike. Pictured: Fans on Wembley Way last night

Professor Spector’s ZOE Covid study — which tracks more than a million Britons a week — found that outbreaks in Britain’s hotspots plateaued last week in the week to July 5.

In Scotland, the number of people getting ill with Covid each day rose by just one per cent to 4,780. In the North West they crept up by three per cent to 4,879.

The East Midlands — which was also one of the first regions to be hit hardest by the Indian ‘Delta’ variant — was the only region which saw cases fall, dropping by 25 per cent to 1,964.

More than a million Britons have already suffered from the debilitating condition, which leaves them struggling against symptoms of the virus for weeks after infection.

But there are fears the rising case numbers could lead these figures to tick up further.

‘While it seems that the link between cases and deaths has been fundamentally weakened thanks to an excellent vaccine roll out, we are still seeing a correlation between new cases and Long Covid.

‘Vaccines reduce the change of people getting Long Covid, by reducing the risk of seriously debilitating symptoms and also by reducing the chances of an infection lasting more than three months.’

Experts say vaccination reduces the risk of long Covid by eight to tenfold, although it does not rule it out completely.

He added the challenge was ‘not going to be trivial’.

The latest data also showed cases were twice as high among Britons who’ve only had one jab, compared to adults who’ve already had both.

Symptom study data estimated there were 22,638 infections among un-vaccinated Britons every day last week, up 17 per cent from 19,228 over the previous seven-day spell.

Professor Spector said that, although cases are rising, the vaccines had transformed the virus into a ‘bad cold’ for many people, who now most commonly suffer a runny nose, headache and sore throat.

But he warned those catching the virus were still being put at risk of ‘Long Covid’  — an often debilitating condition which leaves sufferers with lingering symptoms long after the initial infection.

Professor Spector said: ‘If new cases continue to increase then many more thousands of people, especially the young, will be affected by long term symptoms that leave sufferers unable to live life normally.

‘While it seems that the link between cases and deaths has been fundamentally weakened thanks to an excellent vaccine roll out, we are still seeing a correlation between new cases and Long Covid.

‘Vaccines reduce the change of people getting Long Covid, by reducing the risk of seriously debilitating symptoms and also by reducing the chances of an infection lasting more than three months.’

No10 is pressing on with Freedom Day on July 19 despite the fact cases are doubling every nine days and are expected to soar past 100,000 by August. Ministers insist vaccines will keep the disease at bay and are hopeful cases will start to fade naturally next month.

There is roughly one death per every 1,000 cases in Britain at the moment, down from one in 100 in previous waves, but officials expect this gap to get even wider as more people get vaccinated.

Hospital admissions, on the other hand, are rising again with latest figures showing there were 386 on July 3, an increase of about 45 per cent on the previous week.

That’s double the number in early June but officials say the vast majority of admissions are among unvaccinated people or those who’ve only had one jab.

More than 100 top scientists and doctors last night accused Boris Johnson of conducting a ‘dangerous and unethical experiment’ by pressing on with July 19’s unlocking in the face of a rising epidemic.

In a letter in The Lancet, the experts have demanded the Government reconsider its plan to abandon all restrictions in England this month, describing it as ‘premature’.

They warned that going ahead with Freedom Day despite accepting there could be hundreds of thousands of infections each day is both ‘unethical and illogical’.

Allowing Covid to rip through the country will leave ‘hundreds of thousands with long-term illness and disability’ due to the effects of the virus itself, as well as long Covid, they said.

The letter has also been signed by several of No10’s own expert advisers, including Professor Susan Michie and Professor Stephen Reicher, highlighting the rift within SAGE over the July 19 unlocking.

Many within SAGE – including Professor Chris Whitty and Sir Patrick Vallance – are in favour of opening this month because they fear delaying any longer will only trigger a worse peak in winter.

It comes as a small number of hospitals have had to cancel operations because of a growing number of Covid patients on wards and high numbers of staff off isolating.

Leeds Teaching Hospitals NHS trust scrapped non-urgent procedures this week – including cancer surgery – to cope with the influx of Covid and staffing shortages.