While most states have yet to distribute the extra $300 a week under the president’s executive memorandum, a handful are already running out of funds to pay the additional benefits.

“It seems like it’s ending, it seems like we’re hitting the wall on it,” Michele Evermore, a senior policy analyst at the National Employment Law Project, told Yahoo Money. “They’re cutting off states at six weeks in order to make sure that every state gets some of this money.”

Read more: Here’s what you need to know about unemployment benefits eligibility

Officials in Montana, Texas, and Arizona have said that their states have exhausted six weeks worth of extra unemployment benefits. And the Federal Emergency Management Agency (FEMA) confirmed to Yahoo Money on Thursday that funding is only available for six weeks, meaning jobless Americans will have to rely on their regular state unemployment benefit after that unless Congress passes new legislation.

“FEMA will make grant awards to enable requesting states, territories and the District of Columbia to make $300 LWA supplemental wage payments to eligible claimants for a full six weeks,” a FEMA spokesperson told Yahoo Money. “States should plan to make payments to eligible claimants for no more than six weeks from the week ending August, 1, 2020.” 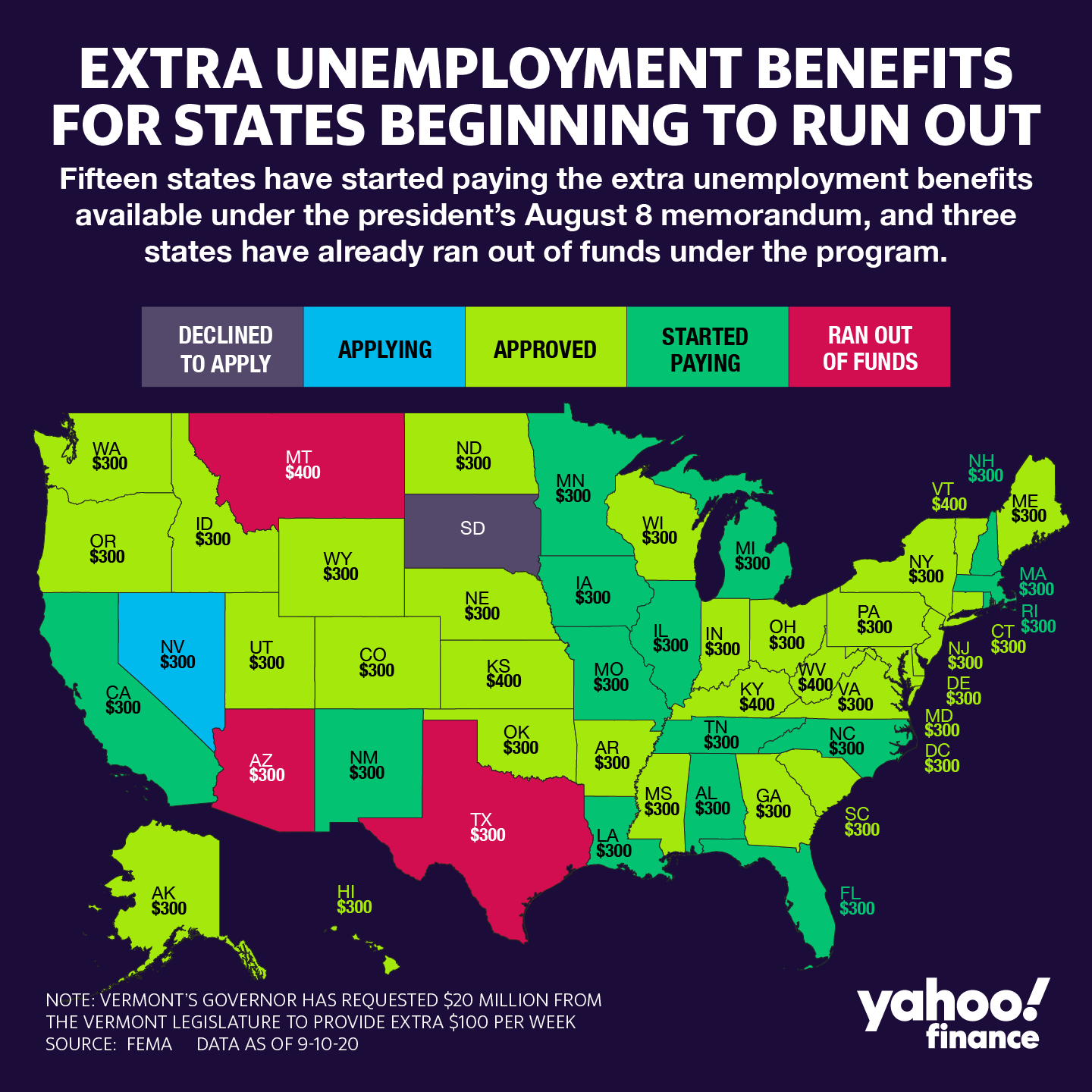 ‘Light a fire under Congress’

On August 8, Trump signed several executive actions in an attempt to bypass stalled negotiations with Democrats about a new stimulus bill amid the coronavirus pandemic. That included the LWA funding that provided $300 to $400 in extra unemployment insurance. But the funding is limited to up to $44 billion redirected from FEMA.

Read more: Unemployment insurance: What it is and how to get it

With all states but South Dakota applying for the benefit and 31 states already approved, the overall funds will be split proportionally among all states. Each state will get full six weeks worth of extra unemployment for their eligible recipients, according to FEMA’s latest guidance.

States that pay the benefits now or in the coming weeks may choose to pay the six weeks all at once.

“It’s probably going to be the case in a lot of states where they just pay a big lump sum benefit,” Evermore said.

Read more: Do you have to pay taxes on unemployment benefits?

No matter how states pay out the benefits, there will be likely just six weeks of that money. That means no extra benefit will be added to unemployed Americans’ checks for any weeks after next, which could potentially pressure Congress to act.

“Now that states are announcing that they’re not paying any more, it may start to light a fire under Congress,” Evermore said. “I have not been hearing any urgency coming from Congress about negotiating and coming together on a deal.” 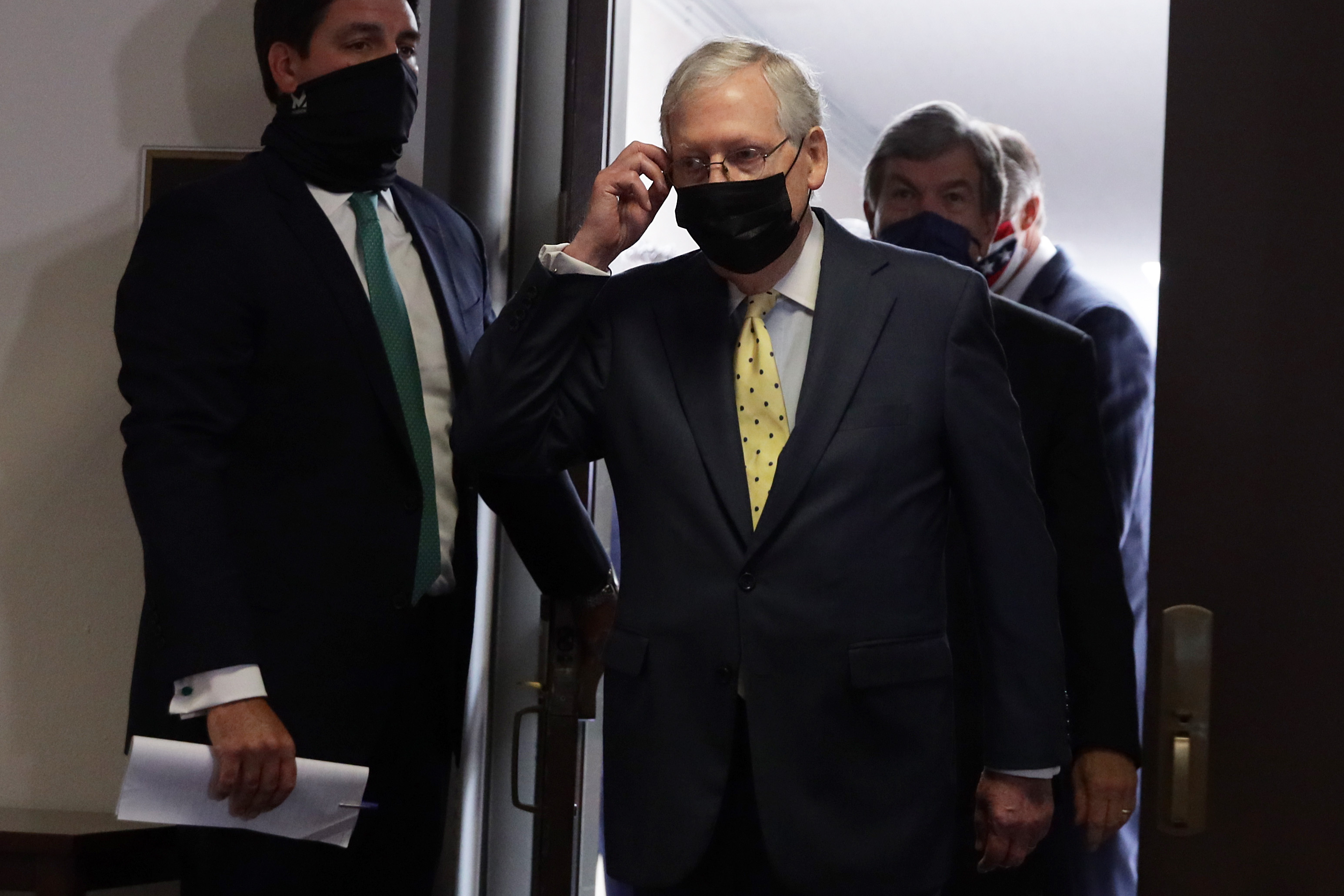 As Congress returned to Washington D.C. this week from recess, the Republicans introduced a scaled-down stimulus proposal — expected to cost around $500 billion — which includes extending the extra unemployment benefit until the end of the year. But the overall proposal is unlikely to advance.

‘We, unfortunately, don’t have unlimited amounts of money’

With funds starting to deplete, President Trump indicated last week that he would like to unlock an extra $300 billion for stimulus measures — but needs Congressional action to do so.

“Now, we have $300 billion in an account that we didn’t use — $300 billion,” President Trump told reporters on Friday. “And we are willing to use that. I would be willing to release it, subject to Congress, and use that as stimulus money.”

“The president extended, through executive authority, enhanced unemployment up to $400 per person,” Mnuchin said during a hearing last week. “Now we, unfortunately, don’t have unlimited amounts of money that we can do that, but the president wanted to move forward.”