Electronic scooters could be a way to avoid gridlock when Melbourne's COVID-19 lockdown lifts, amid concerns that people will use cars rather than public transport to get around.

Victoria's road rules continue to prohibit the use of e-scooters on footpaths at speeds over 10km/h or those with a power output of more than 200 watts. 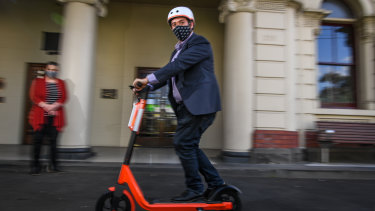 However, the prospect of increased car use due to infection fears has prompted calls for a rethink of Melbourne's transport options, including the potential legalisation of powered scooters.

Australian cities with electronic scooter-share schemes include Adelaide, Brisbane, Canberra, Darwin and Townsville. The scooters are unlocked with an app, with trips typically costing $1 to begin plus a fee every minute after that.

Moreland mayor Lambros Tapinos said the state government should start thinking urgently about how to get cars off the road when restrictions are eased and movement increases.

He is pushing for a trial of an electronic scooter scheme in his area, while the City of Port Phillip has also put up its hand to trial up to 500 scooters. Council elections are taking place this month.

"It's going to be really challenging to get people out of their cars, they won't want to use public transport as much," Cr Tapinos said.

"I think it would work really well in places like Brunswick, where we know congestion is caused by short trips, like people going to the shops."

While they wouldn't replace other options, Cr Tapinos said scooters could add to the mix of cars, bikes, public transport and walking.

"It works in other cities, it works in the US, it can work here," he said.

Monash University research found that public transport use is set to decline by 20 per cent from its normal level after the pandemic subsides, as infection-wary commuters desert the network in favour of their cars.

The survey of more than 2000 people found that one in five people will stop travelling into the CBD, while 9 per cent of the state’s public transport commutes would switch to car trips.

One of the companies angling to introduce a scooter scheme in Melbourne is Neuron, which already operates in several Australia cities, including Adelaide, Brisbane and Darwin.

Another operator, Lime, cut local jobs earlier this year and sent warehoused scooters to Asia, citing delays in changes to the law for the scaling back of its operations.

Melbourne has not been a welcoming place for shared transport options. Many will remember the blue share bikes that were pulled from the streets after almost 10 years due to a lack of use. 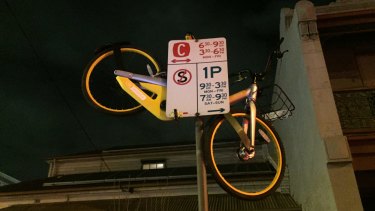 There was also the disastrous influx of dockless bikes from oBike, which were dumped, vandalised and thrown in the Yarra River before they were removed by the Singaporean company after a year.

And then, just this year, a City of Melbourne trial of Uber's Jump bikes was cancelled just weeks after they were placed around CBD streets.

The Department of Transport is waiting for a review led by the National Transport Commission to investigate the use of scooters before any recommending any law changes.