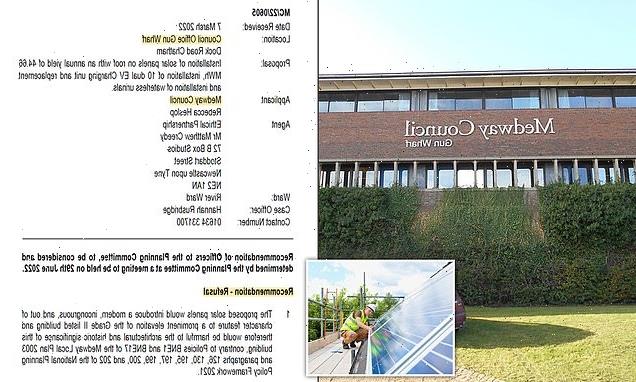 A council has been mocked for its ‘bonkers’ decision to reject its OWN request for planning permission to put solar panels on its Grade II-listed concrete and brick headquarters.

Locals taunted Medway Council in Kent after their own planning officers recommended blocking the request because the eco-friendly panels would ruin the ‘architectural significance of the building.’

Sent to the Conservative-led council on March 7, the request asked for permission to install ‘solar panels on roof with an annual yield of 44.66 MWh’ on top of their office building.

However the planning committee – who are set to decide on the issue next Wednesday – was told to block the idea because the solar panels will look ‘out of place.’

Gun Wharf, the council’s concrete and brick office block, was built in 1978 – but was granted Grade II listed status in 2015. 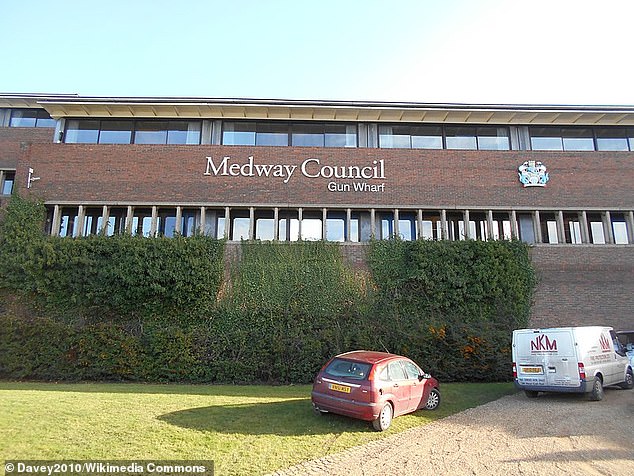 Medway Council’s headquarters Gun Wharf (pictured) was built in the 1970s and is a Grade II-listed building. The council want to place solar panels on its office roof – but their own planning team have recommended blocking the request 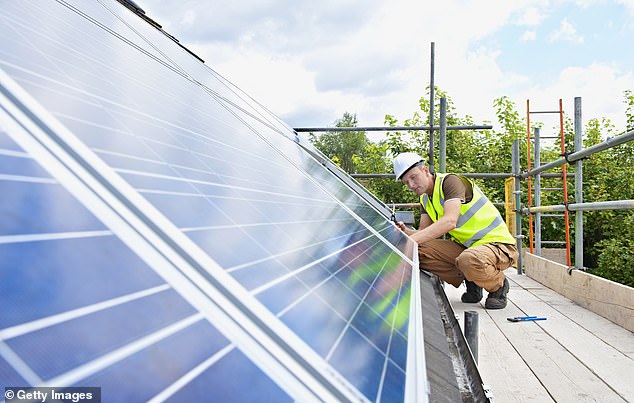 And now the council are seemingly set to reject their own request to make the HQ more eco-friendly.

The recommendation to refuse the permission read: ‘The proposed solar panels would introduce a modern, incongruous, and out of character feature to a prominent elevation of the Grade II listed building and therefore would be harmful to the architectural and historic significance of this building, contrary to policies BNE1 and BNE17 of the Medway Local Plan 2003.’

People were quick to spot the bizarre planning permission clash, and questioned why the council couldn’t decide amongst themselves before launching the appeal. 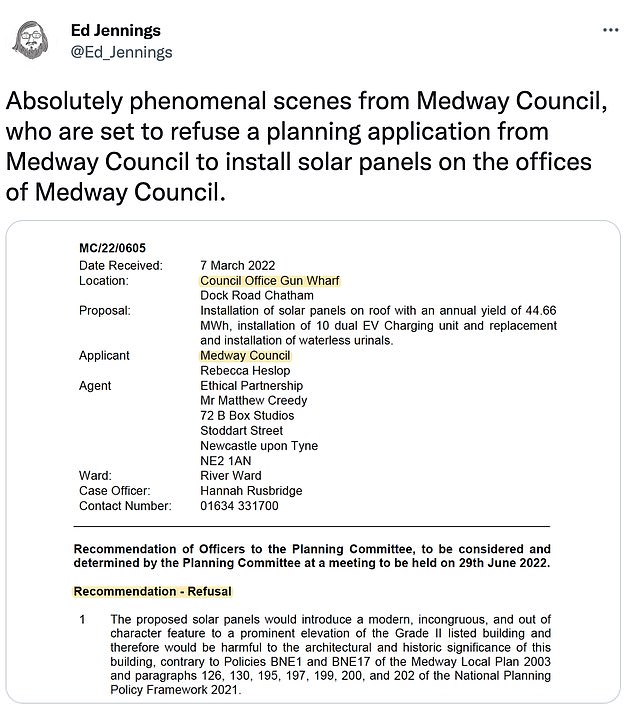 While another added: ‘If they can’t approve their own panels, what hope do us normals have?’

A third user jibed that the council need to be careful – in case they launch an appeal against themselves.

Others said that the rejection was ‘bonkers,’ noting that the panels and charging unit could easily be fitted and no one would be able to see them unless they’re looking at it ‘from space.’

They said: ‘This is bonkers. A casual glance at the actual listing suggests no impact. A glance at the building shows you could place PV on a significant part of the roof and they would not be seen from anywhere but space either. Planning committee – accept this planning.’

The headquarters already has 15 solar panels on the south, east and west facing roofs of Gun Wharf – which are internally facing.

It’s believed that the council are set to reject the request because their offices are in a Grade II building – and if they say yes, they will have to keep the same standards for others requesting similar jobs.

But the whole ordeal has been described as an ‘utter madness’ while social media was flooded with people’s comical responses.

Another baffled local added: ‘That might be the most Kent thing to ever happen.’ 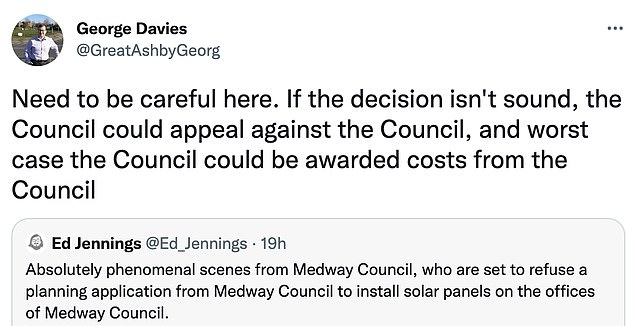 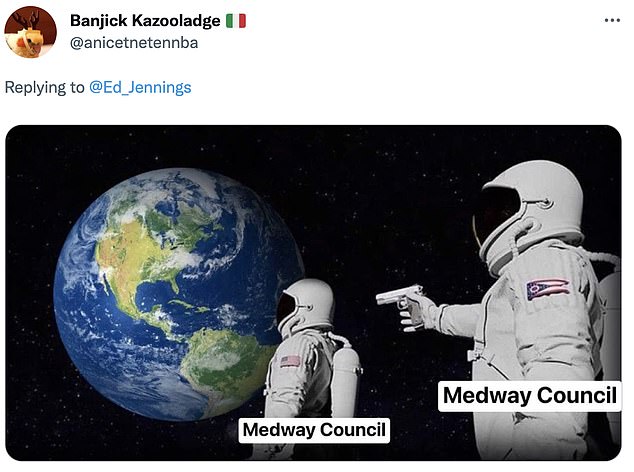 One person wrote: ‘Utter madness. I suspect this is really because they think granting it to a grade 2 listing will mean they’ll get challenged in future by others with similar grade 2 listings.’

He also confirmed that the council can override the recommendation to refuse permission by the council.

Cllr Tranter said: ‘We can override it if we choose to. It is a listed building, hence the recommendation.’

Others worried locals noted how the council seemed to car more about the look of the building, rather than the benefits that solar power will have on the environment.

Medway Council declared a climate emergency in April 2019 – one month before the UK Parliament did.

One person said: ‘So rather than make a sensible environmentally friendly step to help cut carbon emissions, they are more worried it may alter the look of the building. Glad the threat of the climate crisis has really sunk in with some people.’

And another said: ‘The same Medway council that declared a climate emergency in 2019… now refusing to install solar panels on its own office roof.’

A decision on the planning permission will be made by Medway Council’s planning committee on June 29.

Medway Council did not comment when approached by MailOnline.