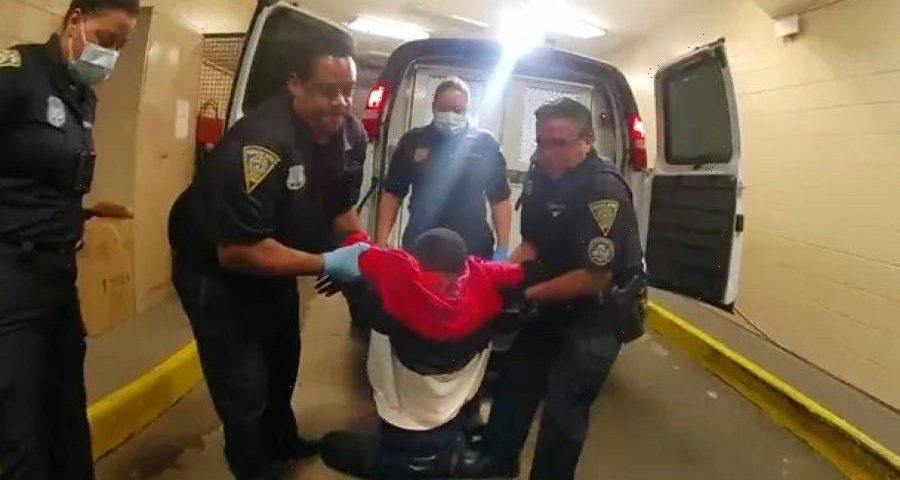 A federal civil suit was filed in the US District Court of Connecticut Tuesday on behalf of a black man, who is now partially paralyzed after an injury he sustained while in police custody.

On Father’s Day, Richard “Randy” Cox Jr., 36, suffered a serious injury to his neck and spine while he was being transported to a detention center in a van unequipped with a seat belt. Police had responded to a 911 call regarding a weapons complaint. Cox was arrested for criminal possession of a firearm and carrying a pistol without a permit.

While inside of the police van officers do not place Cox in any type of seat belt for the ride to the detention center. Police camera footage released on June 30th revealed the incident. The driver, identified as Oscar Officer Diaz, can be seen steering the vehicle with one hand and seemingly texting in the other. The speed data clocks the van moving at 36 mph, when suddenly the officer honks the horn and slams on the brakes. Cox–whose wrists are handcuffed from behind–is flung toward the back of the van, slamming head first into the metal doors.

Cox calls for help, repeatedly says he can’t move and that he thinks he broke his neck.

Officer Diaz tells Cox, “You’re gonna have to give me a second. I can’t open the door without another officer here.” The officer continues driving. A minute later, the officer tells him he’ll get him an ambulance when they arrive at the detention center, and repeats that he won’t open the door.

The ambulance is dispatched to meet the officer and Cox at the detention center.

At the detention center officers try to move Cox’s legs and Cox tells them they aren’t listening and he can’t move. An officer replies, “You’re not even trying.”

Another female officer demands Cox to sit up. “Sit up. You’re doing extra s–t. Sit up.”

For the duration of the video, composed of body cam footage from the officers, they are stating that Cox is perfectly fine, as he was walking before the arrest and kicking the door at the beginning of the drive.

Cox suffered permanent paralysis below his neck, cervical spine injuries, contusions and injury to his muscle, spinal cord injury, permanent scarring and several other bodily injuries. The suit alleges that an officer failed to safely restrain Cox while he was handcuffed in the back of a police van. It also alleges that four other officers contributed to injuries while transporting Cox at a police detention center.

The injuries and incident Cox sustained are eerily similar to the 2015 death of Freddie Gray in Baltimore. While being transported in a police van, Gray sustained injuries to his spinal cord and died.

“Can you imagine what it is like trying to get him here and to the hospital now? Can you imagine what they have to go through?” he said. “He is a human being. Look at the humanity in him. We have a tradition in America of discounting people of color, marginalizing their value.”

Crump said he was seeking such a high sum because Cox would need $20 million to $30 million just to ensure his “basic quality of life.”

Following Cox’s incident, New Haven Mayor Josh Elicker and other city officials announced new reforms with the goal of eliminate the use of police vans for transporting individuals who are being detained by police.