CORONAVIRUS cases fell across England by a third in the week before the lockdown ended.

And infections have almost halved since the "peak" of the second wave in October, data from studies tracking the size of the outbreak show. 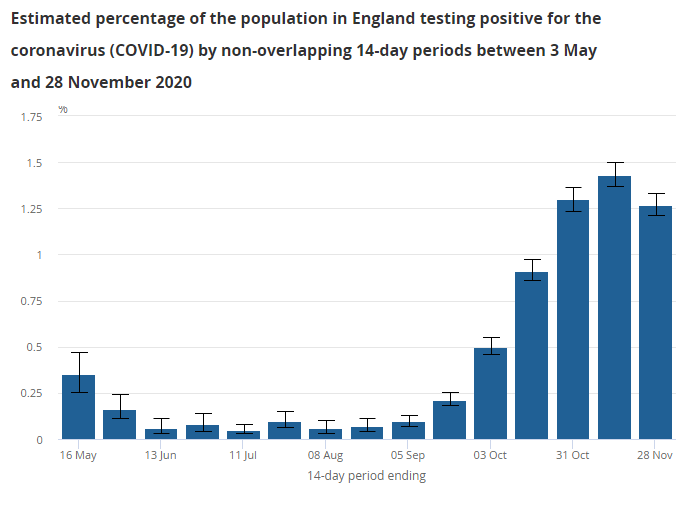 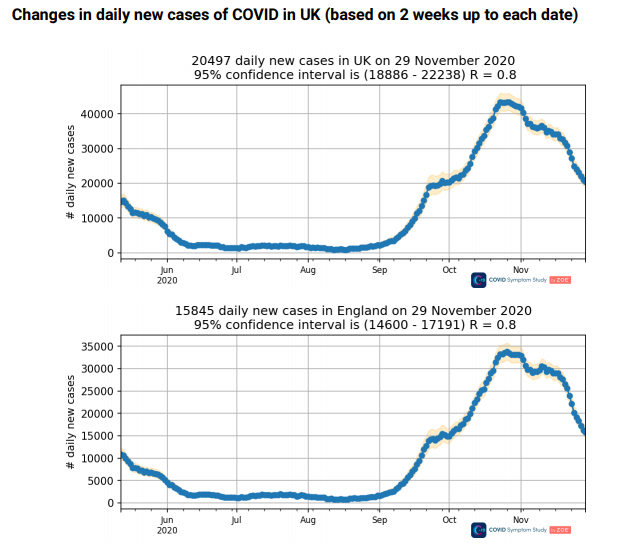 The Office for National Statistics said around 25,700 people were catching the coronavirus every day in the week to November 29, a few days before the lockdown ended on December 2.

On top of this, the COVID Symptom Study app, ran by academics at King's College London, shows cases have halved from the second wave "peak" six weeks ago.

But both studies have shown that cases are on the up in Wales, and appear to be flat, or only lightly falling, in Scotland.

CASES FALL IN ENGLAND BUT RISE IN WALES

The Office for National Statistics Covid-19 Infection Survey is based on more than 635,701 tests gathered from households across the UK over the last six weeks.

The swabs are taken regardless of whether people have symptoms, so it gives an idea of infections in the population both symptomatic and asymptomatic.

At the lowest point, in mid-July, there were only 14,000 people infected.

The statistical agency noted the percentage of people testing positive has decreased in all regions, except the North East.

Cases are lowering across every age group. But they remain the highest in secondary schools kids, from Year 7 to 11. 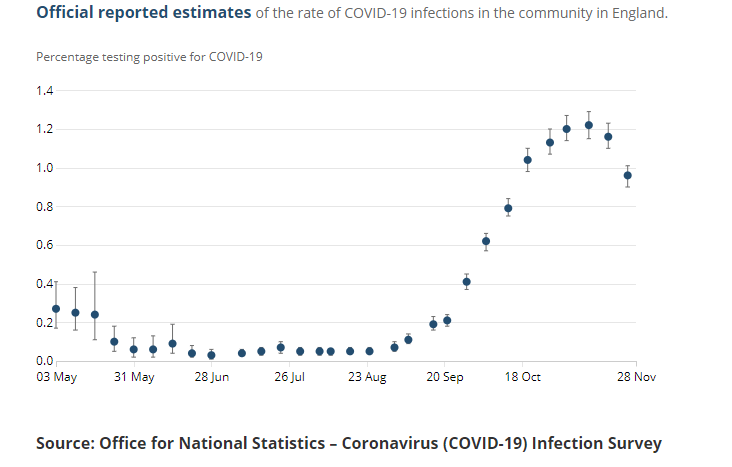 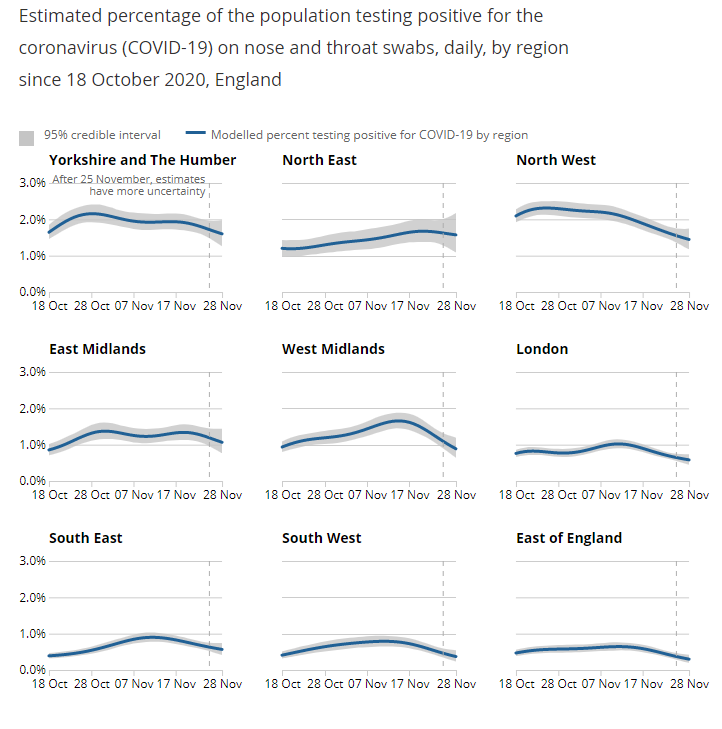 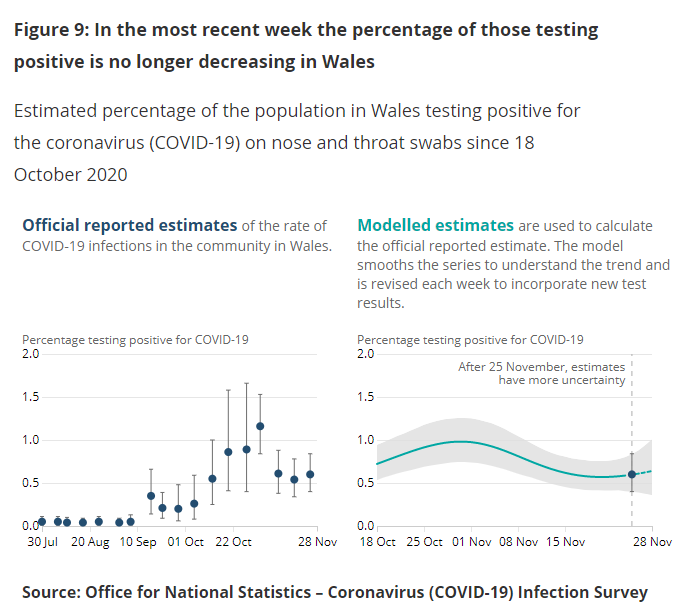 Cases are also starting to improve in Scotland, with an estimated prevalence of 40,900 cases compared with 45,700 the week before.

But in Wales, which came out of a two-week "fire breaker" on November 9, there has been an uptick in infections.

From today, new rules mean pubs, bars, restaurants and cafes will be forced to stop selling alcohol and to shut by 6pm.

The ONS pointed out that the results should be interpreted with caution because the survey size is smaller in Wales, leaving more room for uncertainty.

The ONS figures do not include people staying in hospitals, care homes or other institutional settings.

Cases have halved since October

The app, created by academics at King's College London in partnership with the health company ZOE, is used by 2.8million people.

An estimated 20,497 people are becoming infected with symptomatic Covid-19 every day, the data shows.

Cases have halved from the second wave "peak" six weeks ago, when the app predicted 42,000 new cases a day. 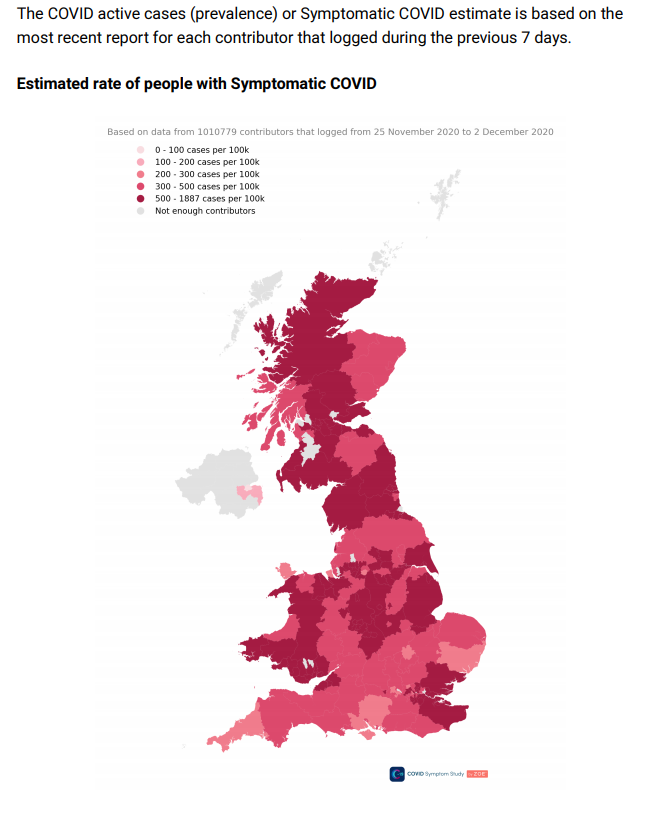 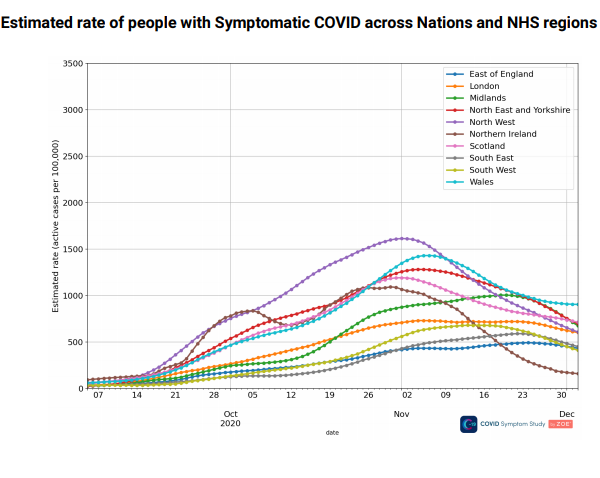 Tim Spector OBE, lead scientist on the app and Professor of Genetic Epidemiology at King’s College London, said: "It’s encouraging to see rates are still falling across most of the UK, and we’re now below 21,000 cases, less than half the peak of the second wave we saw in October.

"However, while we are also seeing steady falls in admissions now, it’s important that we aren’t complacent.

"Even though the UK will start the vaccine roll out next week, many of us won't be getting one for a few months, so keeping the numbers low and under control is really important for the NHS."

The app reveals the R rate is now 0.8 across the UK. 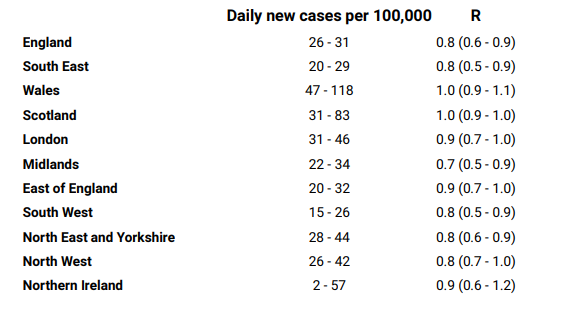 The R value is how many people one infected person passes the coronavirus to, and it is crucial to keep it below 1.

The Midlands saw a dramatic decrease in daily new cases since the middle of November with an R value of 0.7.

But swathes of the Midlands are in the toughest Tier 3 restrictions, which ban pubs, restaurants and cafes from opening.

In Wales, cases have fallen to around the same level as the end of the September but have started to rise again.

In Scotland, cases have fallen to the same levels of the end of September, but recently plateaued.

There are still around 40,000 infectious individuals, KCL said.