Former AFL coach Dani Laidley has expressed her frustration at being covertly photographed at Geelong Racecourse last weekend, in particular with the image being circulated via text message with transphobic comments by several members of Victoria Police.

Ms Laidley was speaking with friends, including former North Melbourne captain Anthony Stevens, while attending the Ballan Cup on Saturday when she was surreptitiously photographed. 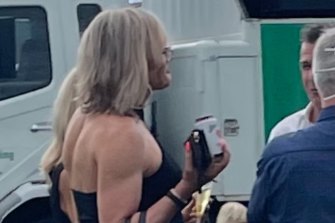 The Age has verified that several police officers were involved in dissemination of the image, with some attaching offensive and transphobic messages. It is unknown who took the photograph.

In May 2020, a mugshot of Ms Laidley and a photo of her being interviewed by two officers while wearing a wig and make-up were released and published on social media within hours of her arrest outside a woman’s home in St Kilda.

“It’s a shame after such a great weekend in Geelong with my partner Donna and great friend Anthony Stevens to find that once again Victoria Police have potentially engaged in poor behaviour,” Ms Laidley said on Tuesday.

“To find out that a picture was widely shared by members of Victoria Police is very disappointing, to say the least. It goes to show you how much education is still required to allow transgender people to live their lives without barriers.”

Ms Laidley gave permission for The Age to publish the image, which she said had marred an otherwise enjoyable day at the races.

“We had an awesome day … We are grateful for the respectful nature of people who came up and spoke to us. The feedback was very positive across the whole day and evening at dinner with a group of friends,” Ms Laidley said.

A Victoria Police spokeswoman said the force was “unaware of these circumstances as described and have not received any complaints of this nature”.

The 54-year-old former North Melbourne player and coach pleaded guilty to stalking in November last year and was put on a good-behaviour bond without conviction after she admitted making dozens of calls and text messages to another woman.

Ms Laidley spent more than a week in custody before she was bailed.

Two of the officers will contest the charges, while a third is yet to enter a plea.

The seven-month investigation into the circulation of those images also resulted in 39 police officers facing internal disciplinary action – with at least six being ordered to pay up to $3000 compensation to Ms Laidley.

In May, Ms Laidley launched a negligence claim against Victoria Police in the Supreme Court of Victoria, alleging the force and its officers breached the duty of care owed to her while she was in custody.

“Those officers intended, or knew or ought to have known that the natural and probable result would be the republication of the first and second photographs and the words in the press, on radio and television, and on the internet. [Ms Laidley] has been injured in her feelings, credit and reputation [and] has been brought into public ridicule and contempt and has suffered and continues to suffer loss and damage,” court documents stated.

Ms Laidley has not nominated a specific amount of money she is entitled to, but is claiming aggravated and exemplary damages.