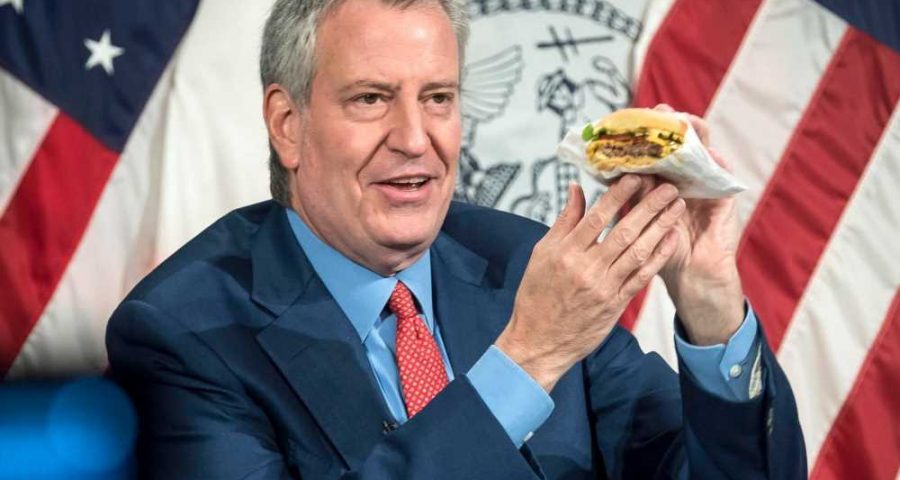 Put down the drink, Bill: Corey Johnson says NYC should be ‘careful’ with stimulus cash

At least he didn’t use a knife and fork…

Mayor Bill de Blasio awkwardly chowed down on a Shake Shack burger and fries for breakfast during his press briefing Thursday — as he announced the fast food outlet is giving away free grub to New Yorkers who get the COVID-19 vaccine.

“I want you to look at these French fries and think about how great it is to get vaccinated,” Hizzoner said after stuffing some crinkle-cut spuds in his mouth.

“Is it too early in the day to eat a burger?” he asked a press aide before taking a big, beefy bite and gushing, “Mmmm… vaccination.”

De Blasio — who used his hands to eat, unlike the time he infamously ate pizza with cutlery — was promoting Shake Shack’s new offer to give away free fries to customers who show their vaccination card at any location over the next month.

Folks who get the shots at Big Apple-run mobile clinics will also score a voucher for a free burger or sandwich, said Shake Shack CEO Randy Garuitti.

“Get your vax, get your Shack,” Garuitti said during the press conference, adding that the deal is good any of the eatery’s 25 locations. “[It’s] free fries on us to say thank you.”

Hizzoner’s breakfast burger stunt came as part of the city’s effort to incentivize more people to get the life-saving jabs, by giving away everything from Chelsea Market gift cards to tickets to Brooklyn Cyclones games.

“I’m getting a very good feeling about vaccinations right at this moment,” de Blasio said with a full mouth. “I’ve gotta finish chewing for a moment.”

Hizzoner then washed the fast food feast down with a Shake Shack cup of water, not soda, he said.

Citing low COVID-19 infection rates, he also said the Global Citizen and Governor’s Ball music festivals — both canceled last year amid the coronavirus crisis —  “will be back.”

Brooklyn-based singer-songwriter King Princess, who will perform at the latter fest, appeared live during the press conference.

Asked about what he wants to cross off his bucket list before his term as mayor ends this year, De Blasio channeled his inner rock star.

“Maybe I have to, like, join one of the bands of the Governor’s Ball [and] debut my musical stylings,” he said.