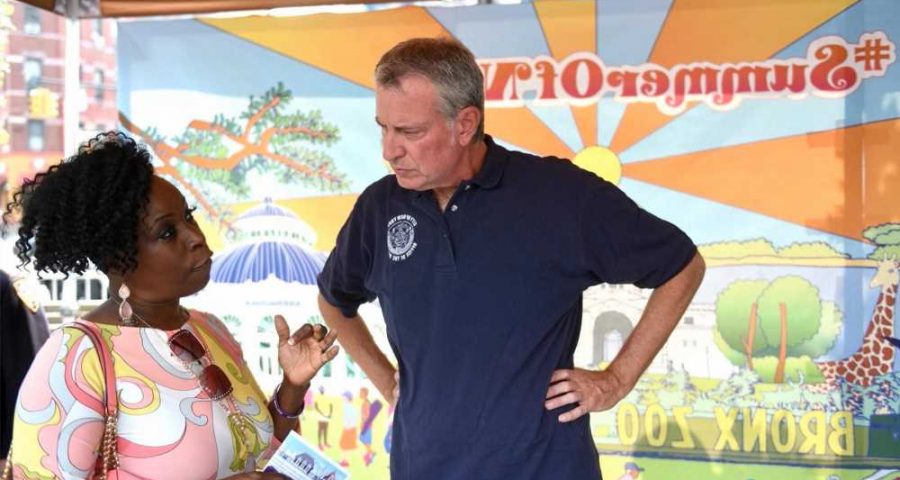 One dead, three injured in separate shootings across NYC

Bronx business leaders beseeched Mayor Bill de Blasio on Tuesday for help against rising crime and declining quality of life, including competition from illegal street vendors — who made their own pitch to Hizzoner.

Directors of eight of the borough’s 11 Business Improvement Districts plus reps from the Bronx Chamber of Commerce met with de Blasio at Roberto Clemente Plaza in the South Bronx, according to Third Avenue BID head Michael Brady.

The huddle — part of de Blasio’s weeklong tour of the Boogie Down under the “City Hall in Your Borough” initiative — came less than a week after Brady and other leaders at the area’s “Hub” district sent a letter to de Blasio and City Council Speaker Corey Johnson decrying lawlessness in the area.

On Tuesday, the group “voiced quality of life and business concerns to the Mayor, specifically in the area of illegal vending, homelessness, drug use and sale, and general inefficiencies in services,” Brady told The Post.

For his part, de Blasio vowed targeted reviews not just in the Bronx but citywide.

“The mayor indicated that City Hall would establish a corridor-by-corridor walk-thru with agency commissioners to address specific concerns, first handling ‘hot spots’ in the five boroughs,” Brady said. “The mayor also indicated that the civilian response could only do so much for [illegal] vending and that enforcement and joint operations are the next step.”

Asked about the meeting, a City Hall spokesman — who noted he was not in attendance — said that de Blasio’s message wasn’t that the civilian response to illegal vending was limited, but rather that it would just be the beginning.

During the Roberto Clemente Plaza visit, de Blasio also met with about a dozen unlicensed street vendors to hear their side of the story.

“We spoke to the mayor and we expressed to him the needs [of] street vendors, that vendors are asking just for a way to be able to formalize their businesses,” said Carina Kaufman-Gutierrez, deputy director of the Urban Justice Center’s Street Vendor Project. “Nobody wants to work in fear. Nobody wants to work in a way that’s outside the system. Everybody wants to be a part of it.”

The end of the public event was marred by a foul-mouthed protester in a “Black Lives Matter” t-shirt who yelled at police before flipping multiple tables and getting arrested.

“You don’t care about us. You come out here for this but you’re never out here for us,” the man railed at cops working the event. “The police are f–king us up.”

His identity was not immediately known.