Washington: The chairman of a Democratic-led US House of Representatives subcommittee announced on Tuesday an investigation into whether Secretary of State Mike Pompeo's appearance at the Republican National Convention breaks federal law and regulations.

"The Trump administration and Secretary Pompeo have shown a gross disregard not only of basic ethics, but also a blatant willingness to violate federal law for political gain," Joaquin Castro, head of the House Foreign Affairs Committee's oversight subcommittee, said in a statement. 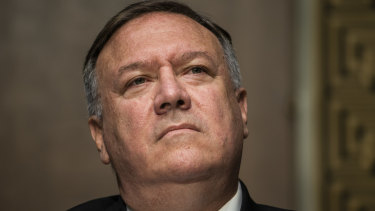 An “errand boy”: US Secretary of State Mike PompeoCredit:AP

In a letter to Deputy Secretary of State Stephen Biegun, Castro said Pompeo's appearance is "highly unusual and likely unprecedented," and "may also be illegal."

Pompeo, who is travelling overseas, was to speak to the convention on Tuesday evening in a video recorded during a stop in Jerusalem, an appearance that has ignited an outcry by Democrats, former senior diplomats and others.

John Bellinger, the top State Department lawyer under former Republican Secretary of State Condoleezza Rice, said the agency has long barred its senior political appointees from partisan political activities, including attending party conventions, even if these may be permitted under the 1939 Hatch act that limits the political activities of federal employees.

His address also appears to violate his own instructions restating the department's long-stand prohibition on political activities – which applies to official and private time — sent to personnel in a July 24 cable reviewed on Monday by Reuters.

A State Department official told a pool reporter travelling with Pompeo that the secretary was appearing in his personal capacity and no State Department personnel or resources were involved. 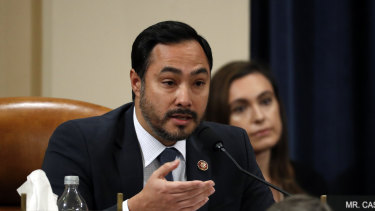 Castro told Biegun that it is "readily apparent" from documents in his panel's possession that Pompeo's appearance may violate the Hatch Act, federal regulations implementing that law and federal rules.

He asked that Biegun answer by no later than September 1 a series of questions and arrange a briefing for lawmakers by the same date.

Ahead of the expected address, Kate Bedingfield, the deputy campaign manager to Biden, issued a stinging rebuke, saying the speech amounted to the "politicisation" of diplomacy.

"Secretary Pompeo's decision to address the Republican Convention from Jerusalem isn't just an abuse of taxpayer dollars, it undermines the critical work being done by the State Department," Ms Bedingfield said in a statement.

She added later: "Even by this administration's abysmally low standards, Secretary Pompeo's decision to serve as an errand boy for the President's re-election on a taxpayer-funded diplomatic mission, and his decision to use one of our closest partners as a political prop in the process, is absolutely disgraceful."