A disabled woman who was raped by a man she met through an online dating site has told the disability royal commission she was “dead furious” at the support workers at her former group home for their failure to support her with relationships and sex.

Sophie (a pseudonym), 34, said she was subject to “stupid rules” that treated her like a teenager when she lived at two homes in Lismore, NSW, run by Life Without Barriers from her mid 20s to early 30s. 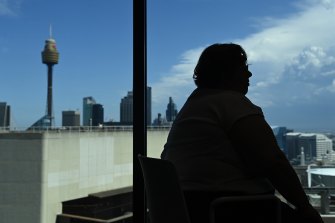 “Sophie” told the Disability Royal Commission she had rules imposed on her but not other residents.Credit:Kate Geraghty

The rules, which applied only to Sophie and not to other residents, effectively prevented her from inviting men to visit “on her home turf”, forcing her to have dates away from the house. She was not allowed to receive visitors after 6pm and was told to leave the door open when she had visitors during the day.

Even when she was engaged to be married, in 2014-15, she was not allowed to have her fiance visit her room with the door closed or stay the night.

Sophie said she had raised this with the support workers “multiple times” and they told her he would be a “hindrance” to other residents, so she would often stay at his house instead.

“I felt hurt because he was my first love,” she said. “I felt they didn’t even want me to have a boyfriend, I felt they weren’t interested in my needs.“

Sophie was born premature and lives with cerebral palsy, a mild to moderate intellectual disability, epilepsy, paralysis on the left side, and she is partially sighted and hard of hearing.

She lived with her parents until she was 24 and moved into her first group home in 2011. She shared her desire to date men and experience intimate or sexual relationships, but found staff dismissive. She said she grew up with “old school values” and wanted to meet a man she could marry.

After she broke it off with her fiance in 2015, Sophie tried internet dating but she felt she had to lie and hide this from the support workers for fear of judgment.

In 2017 she went on a date with a man who picked her up, took her for a takeaway dinner at the KFC drive-through, then took her to an isolated football field where he sexually assaulted her, before dropping her home. He was later charged and made a plea bargain.

Her mother Michelle, also a pseudonym, told the commission she did not blame Life Without Borders for the assault, but she did hold them responsible for what happened before and afterwards.

Her father Greg, also a pseudonym, said it felt like the “cone of silence” came down and staff took an accusatory tone about how Sophie was assaulted and they had to pay to install security cameras as a result.

Jodi Rodgers, a sexologist counsellor from Birds and Bees, said people with disabilities have a right to sexuality and comprehensive sex and relationship education.

Ms Rodgers, who will give evidence at the royal commission on Wednesday, said the story was reflective of a wider issue.

“There’s still an archaic perception that a person with disabilities is not a sexual person or not wanting to have intimate romantic relationships with other people,” Ms Rodgers said. “We still look at somebody with an intellectual disability or cognitive disability as being childlike.”

Sophie wanted to have sex with her fiance but he was unsure and they never did. After her consensual encounter in the motel, one staff member organised sex education, which Sophie described as “minimal”. She wanted face-to-face teaching from a female support worker and DVDs about sex and relationships but instead got “childish” picture books about how sperm fertilise eggs.

Sophie is now living in a different group home on the NSW North Coast and is allowed to have her “kind and generous” boyfriend visit, as long as she provides notice.