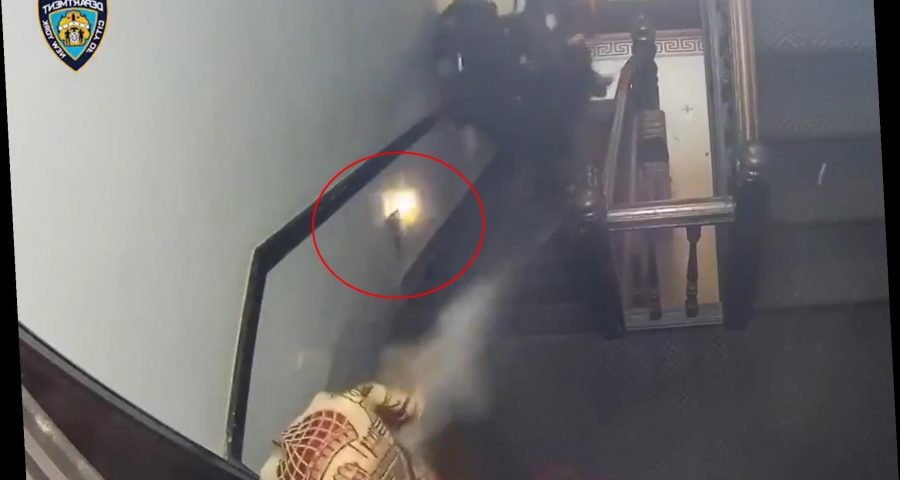 ‘She didn’t have to die like that’: Relatives mourn Brooklyn woman killed by backhoe

The officers were responding to a 911 call about a man shot inside his Prospect Lefferts Gardens home at around 9 p.m. Sunday.

CCTV footage released by cops Monday shows a man exiting the second-floor apartment in question with a blanket over his head.

He then begins speaking to the cops standing at the bottom of the narrow staircase.

After exchanging a few words with the seemingly belligerent man the cops being walking up the stairs in a single file line, according to bodycam video.

“You called?” the first cop in line asks.

That’s when he realizes the man had pulled out a .38 caliber revolver from under the blanket — and yells “Yo! Put the gun down!”

The then suspect squeezed off three rounds from about 10 feet away, police said.

The first officer in the line of fire “instinctively turned his body” and bladed himself, allowing him “to avoid a direct impact to his bullet-resistant vest,” NYPD Chief of Detective Rodney Harrison told reporters on Monday.

The bullet grazed the front of his vest, hit his body-worn camera and got lodged inside his jacket, Harrison said.

Another bullet grazed the shin of the fourth officer in the line, police said.

Both officers were taken to a hospital for evaluation and were in stable condition.

“This incident could have been a lot worse,” Harrison said, “but by the grace of God, our heroic officers will be going home.”

The suspect, identified by sources as 44-year-old Ridwaan Abdur Rashin, barricaded himself inside the apartment and was eventually arrested and taken to Brookdale Hospital for evaluation.

Police determined that he’d shot his roommate in each leg. The roommate was taken to Kings County Hospital and was in stable condition.

In addition to the revolver, which police said was an illegal firearm, cops also found an AR-15 semi-automatic rifle and a shotgun inside the apartment, on Hawthorne Street between Bedford and Flatbush Avenues.

Police Commissioner Dermot Shea said that both of the officers “narrowly avoided being killed.”

“We have seen this far too often lately,” he told reporters.