Dog walker, 51, feared she would DIE after she was headbutted and almost crushed to death by a herd of ‘agitated’ COWS in a ‘terrifying’ five-minute-long attack

A dog walker crossing a public field was almost strangled and battered to death by a heard of cows in a five minute long horror attack in Lancashire.

Sharon Eley was surrounded by 20 cows led by an agitated ‘ringleader’ which threw her to the ground twice before repeatedly headbutting her, leaving her with 15 broken ribs, a punctured lung, a dislocated and shattered ankle and a broken clavicle.

The 51-year-old was also nearly garrotted when the strap on her bag wrapped around her throat during the attack, leaving her with a ligature mark around and severe bruising. 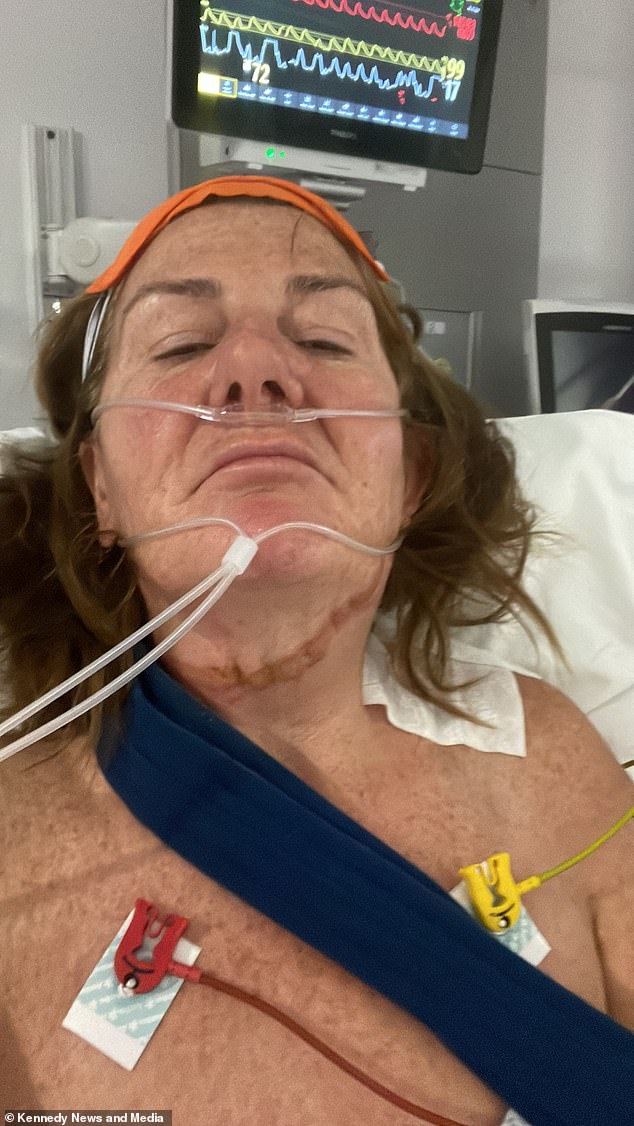 Sharon Eley was left with 15 broken ribs, a punctured lung, a dislocated and shattered ankle and a broken clavicle 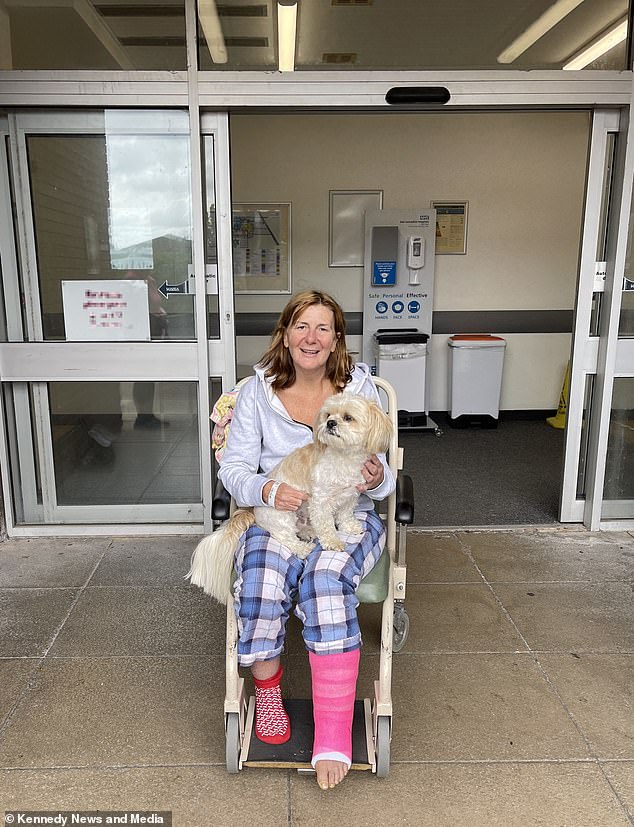 It was only when other walkers entered the field and managed to distract the cows that the glamping business owner was able to escape. The other walkers escaped unharmed.

Ms Eley managed to drag herself to her feet for a stand-off between her and one remaining cow, which eventually backed down. She was then able to crawl to the edge of the field and haul herself over a dry-stone wall.

From there, she was rushed to hospital by a Mountain Rescue team, where she underwent two surgeries on her ankle. She returned to her home in the village of Blacko, Lancashire a month later.

She is now urging others to be aware of their surroundings when enjoying walks through the countryside.

Recounting the terror attack which happened while she walked her five-year old Lhasa Apso Ralphie with a friend and her dog on May 22 this year, she admitted that she thought she was going to ‘die by a cow attack’.

‘It was terrifying’, she said. ‘They pushed me over, I was on my hands and knees and I didn’t know how to get out. 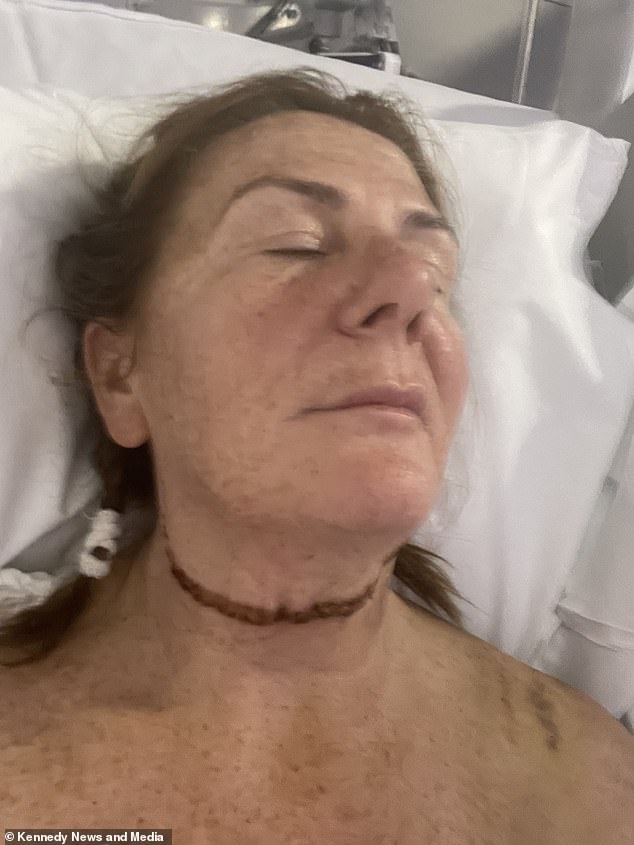 The 51-year-old was also nearly garrotted when the strap on her bag wrapped around her throat during the attack, leaving her with a ligature mark around 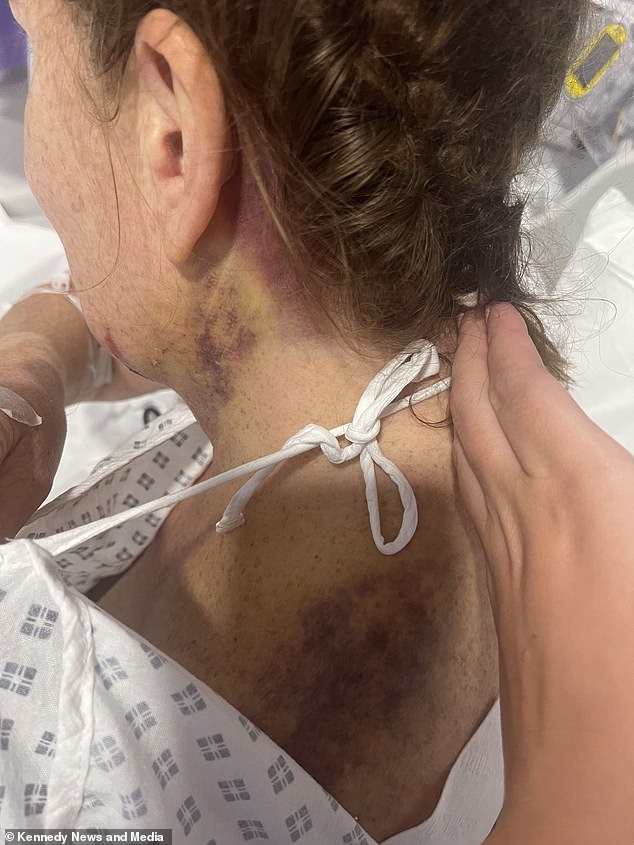 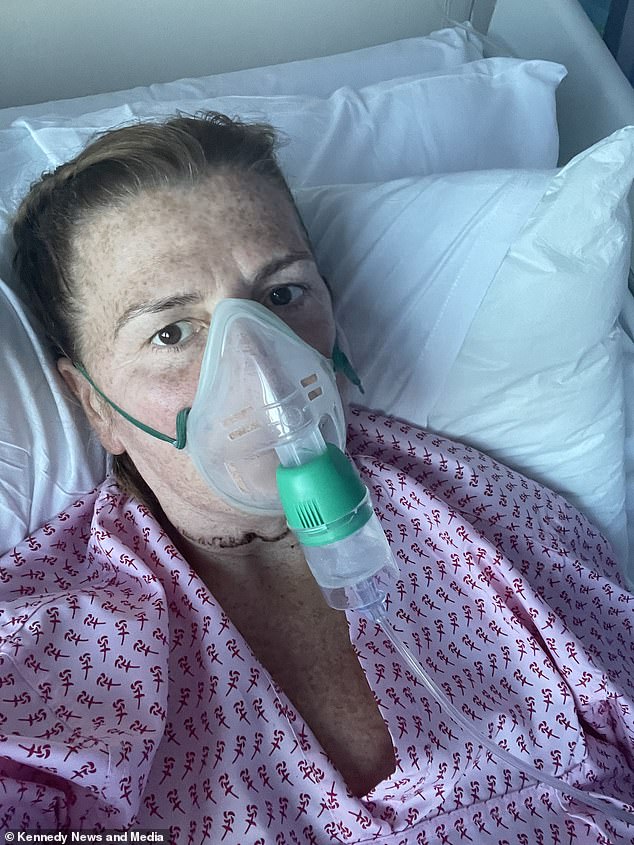 ‘I was wearing a hard leather backpack handbag and they were hitting it. The next minute they’d snapped the arm off my backpack, that had gone round my neck and it was choking me.

A keen hiker who’d racked up over 30 miles in four days as part of her training for the Yorkshire Three Peak Challenge, Ms Eley had walked the same route just one day before and encountered no issues.

She and her pal walked through two fields with their dogs on a short lead, and crossed the first field with no problem.

It was only when they entered the second field that they spotted the 20 cows, including calves, huddled together around 20ft away.

‘My friend said to me ‘oh god I’m not sure about this Sharon’ and I said ‘it’s ok, we’ll just wide berth them,’ Ms Eley said. ‘Don’t worry, don’t run, it’s all good, just stand behind me, don’t worry about it’.

‘Then the cows ran and that’s quite a scary experience, they skidded and stopped in front of us. They were just out of arm’s reach and one of them was snorting.

‘I was thinking ‘this isn’t very good’. Someone had once said to make yourself look big – put your arms out but don’t agitate them – and they will go away. 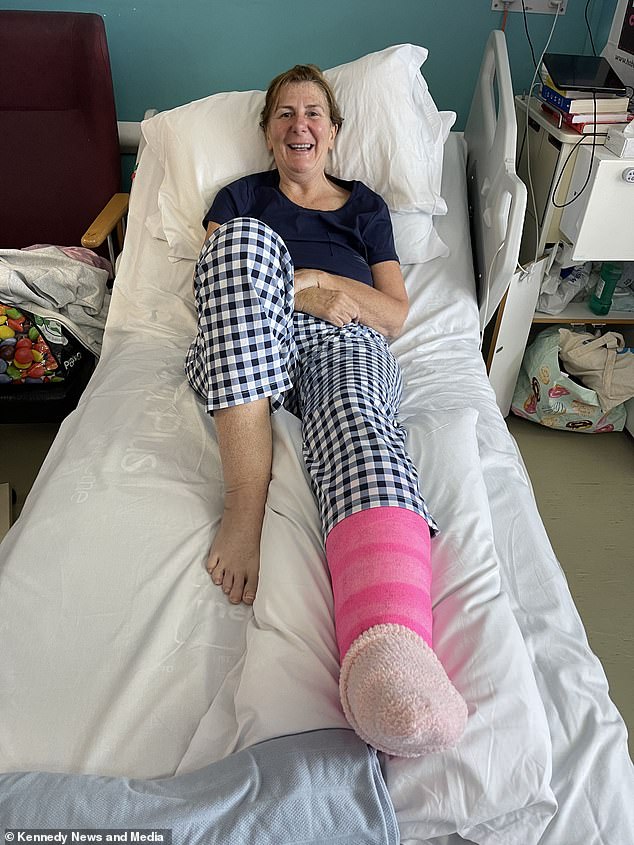 ‘I’ve tried that before when I’ve been walking and it’s worked.

‘When they got too close I put my arms up, I didn’t shoo them or make any noises, but then they started to come closer.

‘They herded together as I tried to walk slowly away and the next minute they charged and pushed me over.’

While Ralphie was able to escape the onslaught, Ms Eley was subjected to repeated headbutts which caused catastrophic injuries.

‘There was one cow in front of me, again at arm’s length, so it was a stand-off now between this one cow that was just snorting and staring at me. I thought ‘this is game over now because I can’t actually move.

‘What felt like an hour, but was probably about three seconds, this cow just snorted and then walked off.

‘My friend was screaming for me to get out of the field, she tried to help me but I screamed at her to get off because I was in pain.

‘My adrenaline kicked in and I crawled on my hands and knees to get to the drystone wall. I got to the wall, turned over, threw my legs over and shimmied over it. Everything in my body was aching.’ 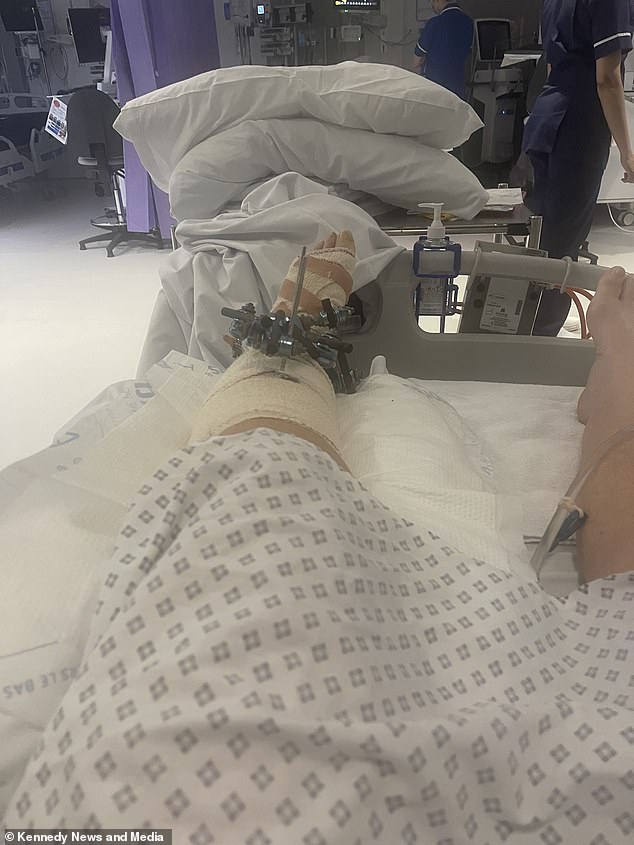 She needed to have two surgeries to correct the damage done to her ankle, which included inserting metal plates and rods to hold it together 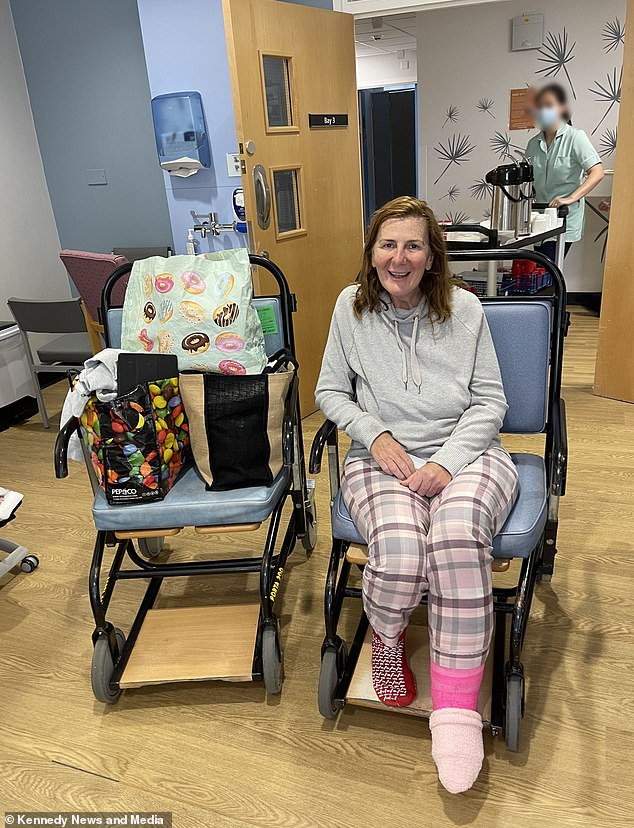 Mountain Rescue arrive a mere 10 minutes later and rushed her to Royal Preston Hospital where she underwent surgery to hold her foot in place before another surgery a week later.

She spent five days in ICU and two weeks in the major trauma unit before being transferred to Burnley General Teaching Hospital in Lancashire for rehabilitation.

‘When the paramedics arrived they tried to give me a drink but I couldn’t move my neck,’ Ms Eley added.

‘When we got to major trauma it was like a scene out of ER. They hooked me up to a morphine IV and I had loads of scans and x-rays. It was quite scary because I didn’t actually want to ask what was wrong with me.

‘It’s weird as much as I thought I’d be dead brave and want to know everything at that stage I didn’t dare ask, I was really scared. I didn’t know what was wrong with me or whether I was going to die or not.’

She added that her broken ribs will take another six weeks to heal properly, four months on from the attack.

After the ordeal, she is still at a loss as to why the cows charged, and consulted a local farmer.

‘I asked if it was because I had a bright red jacket on, but he said cows are colour blind,’ she said. ‘He said that when cows calve you may get one who is a little bit temperamental, all the other cows just follow. 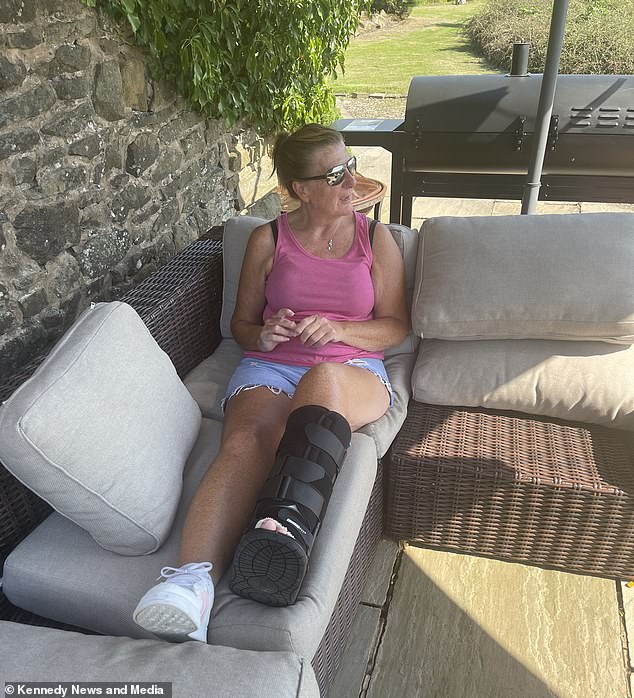 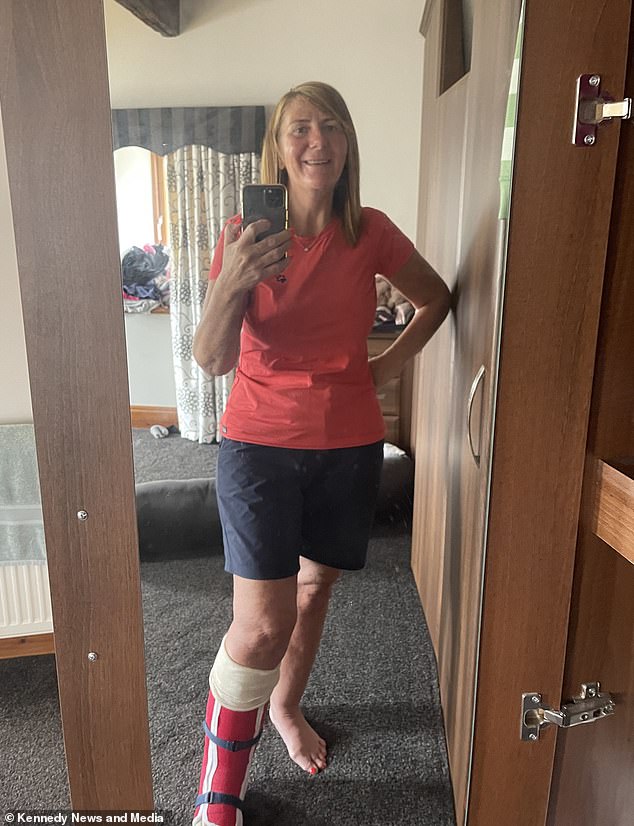 Despite her ordeal, she still plans to get out into the countryside again as soon as possible

‘I’m positive, it’s going to get better. My friend is going through her own trauma from what she witnessed and not being able to physically help.’

Despite her ordeal, she still plans to get out into the countryside again as soon as possible.

‘I’m in a walking boot now and I’m already planning a walk on the canal next week,’ she said. ‘I’d like to think the experience hasn’t put me off hiking.

‘I was ultra-cautious before around cows so I do worry. I don’t know whether I would walk through a field with any livestock in it now.

‘My advice to other walkers and hikers would be to just know your surroundings. Know where you are because if you do get seriously injured it could be a case of life or death.’