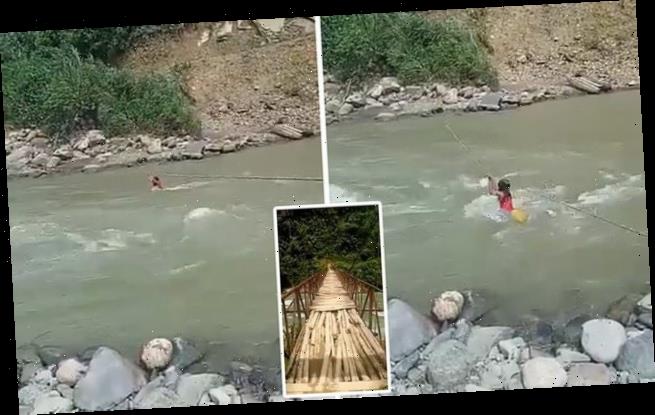 This is the dramatic moment a young girl risked her life trying to cross a raging river following the collapse of the only bridge that connected her indigenous community with the nearest town.

The dilapidated footbridge over the Aguita River in Pueblo Rico, Colombia, was used by around 2,000 members of the Embera Chami tribe before it was washed away in floods last November.

Heartbreaking footage showed a child battling against the force of nature as she tried to reach the opposite bank with only a piece of rope to cling on to.

University professor Daniel Silva Orrego, an MP for the department of Risaralda which includes the municipality of Pueblo Rico, said: ‘These are the dangerous conditions in which children and adults currently have to cross the river. 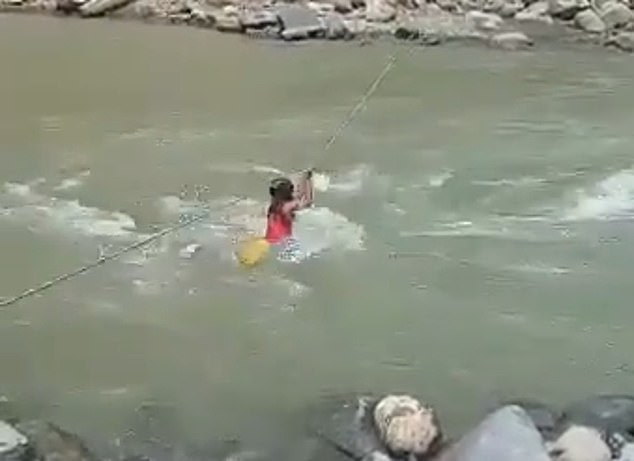 Heartbreaking footage showed a child battling against the force of nature as she tried to reach the opposite bank of the Aguita River with only a piece of rope to cling on to in Pueblo Rico, Colombia

‘Last November the bridge they were using to cross the river was washed away, and so far no solution has been offered.

‘I urge the mayor of Pueblo Rico and Risaralda’s departmental government to act immediately before we have to lament a loss of life.

‘Pueblo Rico has been abandoned for years. The authorities only pay attention to it when shocking incidents like the rape of indigenous girls occur. That is shocking.’

Colombian journalist Diana Mejia said: ‘The Santa Rita bridge, the only one which connected the Embera Chami tribe with the rest of the region, was in a terrible condition until it was destroyed. The local community demanded action.’

Local press have reported Pueblo Rico’s mayor Leonardo Siagama Gutierrez not only failed to do anything to remedy the situation but even spent nearly £15,000 of public money on a three-day party despite the coronavirus crisis. 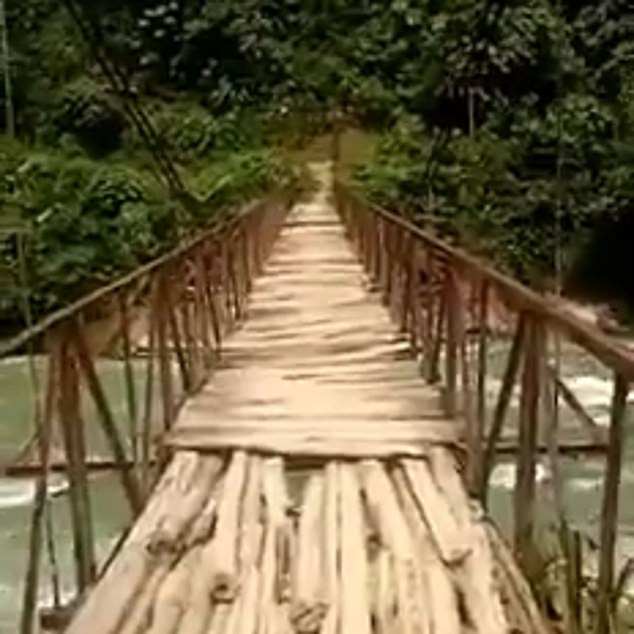 The dilapidated footbridge (pictured) was used by around 2,000 members of the Embera Chami tribe before it was washed away in floods last November

Classes are set to resume soon after the summer break and critics say a new crossing must be put in place so children have a safe option of getting to school.

The row intensified last night after Pueblo Rico’s mayor claimed the youngster had been forced to cross the river by adult members of her tribe as part of an ‘irresponsible’ protest.

He said: ‘This girl was obliged to do what she did by her own community.’

He also insisted measures were being taken to tackle the problem but was unable to say when a new bridge would be in place.

Risaralda,in Colombia’s central Andean region in the west of the country, is a mountainous territory featuring many kinds of climate in a small area. It is well-known for the high quality of its coffee.