A ‘selfish’ driver who took 30 rubber gloves from a petrol station has said that he’s sorry.

Steve Harrison captured footage of a Mercedes driver taking 15 pairs of gloves from a Tesco petrol station in Salford, Greater Manchester, prompting the motorist to apologise.

Dashcam footage viewed more than 163,000 times shows how Steve refused to let the man’s ‘disgusting’ actions go unchallenged and walked over to confront him.

He said: ‘I felt so strongly about what he’d done that I had to go over and confront him. I wasn’t holding back. 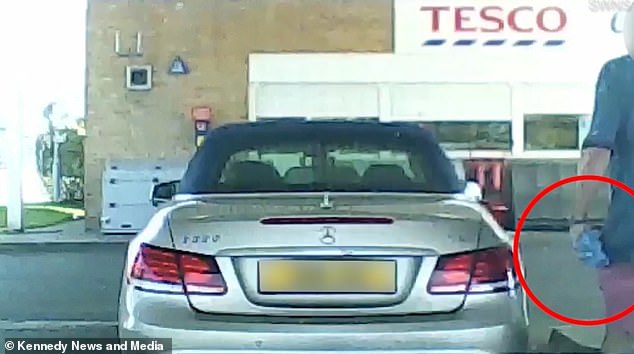 Steve Harrison captured footage of a Mercedes driver taking 15 pairs of gloves from a Tesco petrol station in Salford, Greater Manchester, prompting the motorist to apologise. The gloves are circled

‘It was just an instant reaction. I thought ‘you selfish b*stard’. We have to think of everyone else at the moment.

‘One person could pass on coronavirus to 30 people from not being able to use a glove at that pump.

‘At the moment, we’ve all got to look after each other but this guy was only worried about himself, nobody else.

‘Just don’t be selfish, think of everyone else. People are dying daily from this.’

Steve can be seen opening the driver’s side door before asking him why he had grabbed all of the gloves, which were now reportedly on his passenger seat. 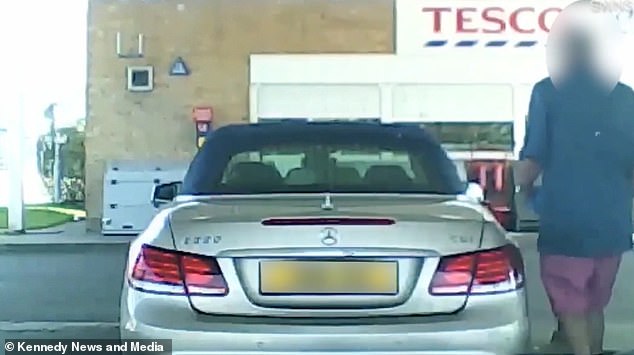 The driver (pictured) said that he only meant to take one pair of gloves, but accidentally grabbed the lot but was too embarrassed to return them

Having received a blank stare, self-employed food courier Steve was stunned when the man asked him ‘do you want some’ before closing his car door and driving off.

The Mercedes driver contacted the Manchester Evening News after the video was published on Friday morning.

He said that he only meant to take one pair of gloves, but accidentally grabbed the lot and was too embarrassed to return them.

Public Health England has advised drivers to wear gloves when filling up their cars, to limit the spread of the coronavirus.

The man told the Manchester Evening News: ‘I deeply regret taking them. It was selfish and irresponsible.

‘I am going to make a donation to an NHS charity or a charity that’s helping with coronavirus.

‘I just wanted to grab one pair, but they were all clumped together and they all came out at once. I’m very sorry. It was very irresponsible.’

He added that he was too embarrassed to put them back and so threw them on his car seat. 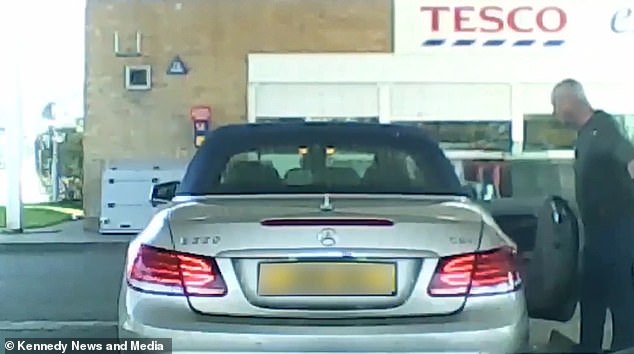 Dashcam footage viewed more than 163,000 times shows how Steve (pictured) refused to let the man’s ‘disgusting’ actions go unchallenged and walked over to confront him

Steve – who filmed the incident – added: ‘I was just so shocked that he did it. It was absolutely disgusting.

‘He has a nice car with a private number plate. He’s obviously got a few quid so he could afford them. But he was just a really arrogant person. He didn’t care.

‘I looked on the way to his car and the glove dispensary was empty. The next person filling up had no way of protecting themselves from this virus.

‘I opened his car door to confront him about it. I gave him every opportunity to put them back.

‘I told him he’d taken each and every one of those gloves that people need to stop spreading this virus. He had them all there on your front seat.

‘He wasn’t bothered. He just looked at me. In the end he said ‘do you want some’?

‘Then he just shut the door and drove off.

‘I couldn’t believe he didn’t put them back when confronted. In these times, the way things are, we need every little help with hygiene.’

Steve, who had been to buy some bread, milk and eggs with his partner Carol Cooper, 51, suffers with asthma and had been practising social distancing before confronting the Mercedes driver.

‘Tesco put those gloves out there for everyone for a reason and he thought it was his right to take them all. It was disgusting.

‘I only put one glove on to save wasting them. He had used one and when he’d finished he binned that and then walked back to the dispensary and grabbed the whole lot.

‘He took them all and put them in his car.

‘There are a lot of people with underlying health problems that you don’t know about so you have to think of everybody else.

‘Being selfish is not the way to do it.’