An overtaking convertible sports car narrowly avoided a head-on crash causing an oncoming driver to swerve off the road.

Police are investigating after shocking dashcam footage filmed near Scunthorpe on Friday shows the near miss.

The Mazda MX5 pulls out near a junction and crosses white hazard markings in the middle of the road.

As a car turns off at a junction near Scunthorpe, a Mazda MX5 prepares to overtake a van, unaware of the oncoming car

Spotting the oncoming car in the other lane, the Mazda driver slams the brakes, creating a large cloud of smoke, and pulls across just in time.

Adding to the danger of the manoeuvre, the open-top vehicle appears to have a large, metal-framed object sticking out of the back.

The footage was captured on Friday by Lee Robinson, from Scunthorpe, who accused the Mazda driver of almost ‘killing’ him.

Mr Robinson uploaded the video to Facebook the same day with the caption: ‘Does anybody know who the Blue MX5? 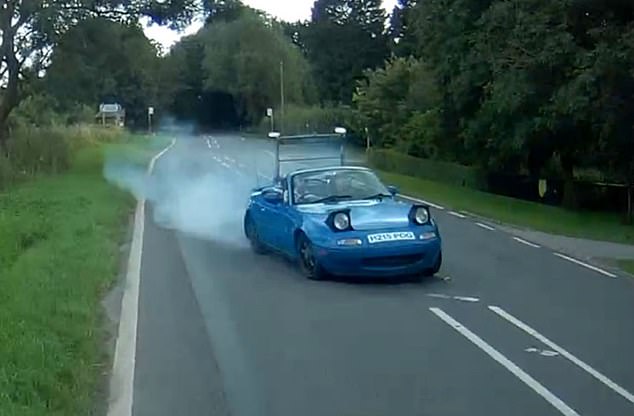 The Mazda driver slams the brakes, creating a large cloud of smoke, and pulls across just in time

‘Please share this video as I would love to meet him once again for a nice little chat.’

He said the incident happened on the B1398 between Kirton in Lindsey and the Hemswell roundabout.

Speaking today, Lee said: ‘He could have killed me, if he had hit me because of his stupid driving.

‘It was a very close call probably the closest I’ve ever had.

‘The guy was driving like an idiot. I didn’t think I was coming home.’

A spokeswoman for Lincolnshire Police said: ‘We are investigating the incident raised by the footage.’ 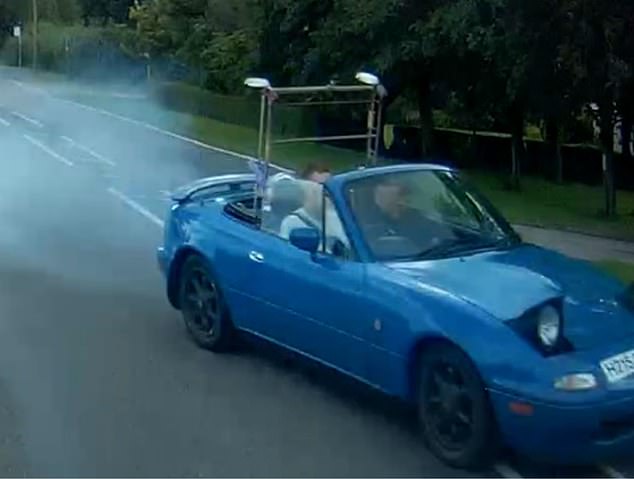 Adding to the danger of the manoeuvre, the open-top vehicle appears to have a large, metal-framed object sticking out of the back