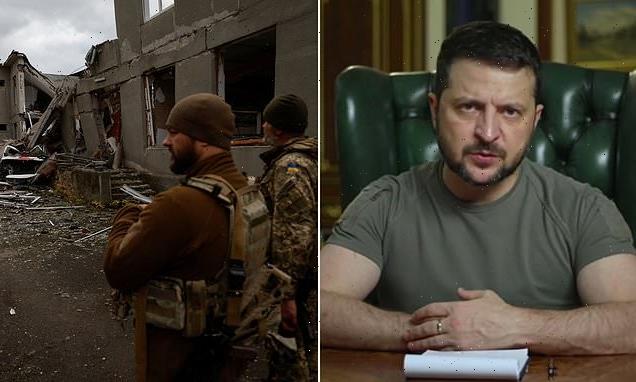 ‘They are driving people to their deaths’: Zelensky condemns the ‘craziness’ of Putin’s commanders ordering Russian soldiers to repeatedly attack key towns in east Ukraine

Ukrainian troops are coming under repeated attacks near two key towns in the eastern Donbas region and are ‘heroically’ holding out under heavy artillery fire, he said, describing the tactics deployed by Putin’s army leaders as ‘crazy’.

It is the latest in Putin’s illegal war in Ukraine which saw him annex four regions, including the two that make up the Donbas (Luhansk and Donetsk), only for Kyiv’s forces to launch counter-offences which have seen major gains in recent weeks.

Giving his typical evening video address to his nation, Zelensky said there would soon be good news from the front, but gave no details.

It is thought Ukraine is in the process of another major offensive against Russian troops, as details of exact battle-lines and positions remain under wraps.

But the most severe fighting is taking place near Avdiivka, outside Donetsk, and Bakhmut, further to the northeast, he said. 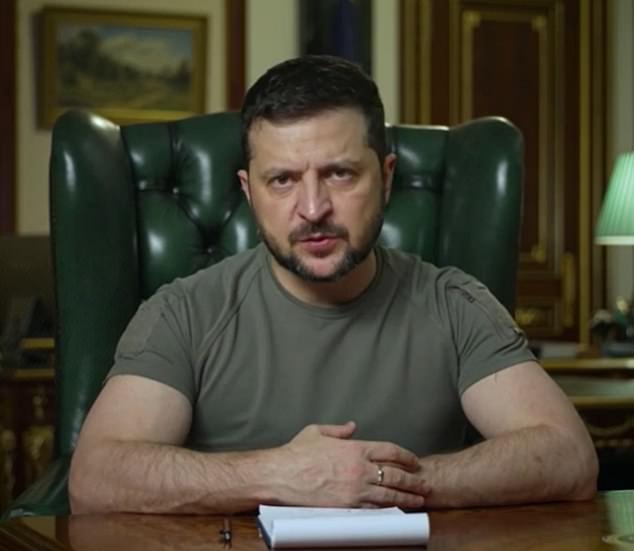 President Zelensky described Russia’s tactical approach as ‘crazy’, and added there will be good news for Ukrainians from the front line soon 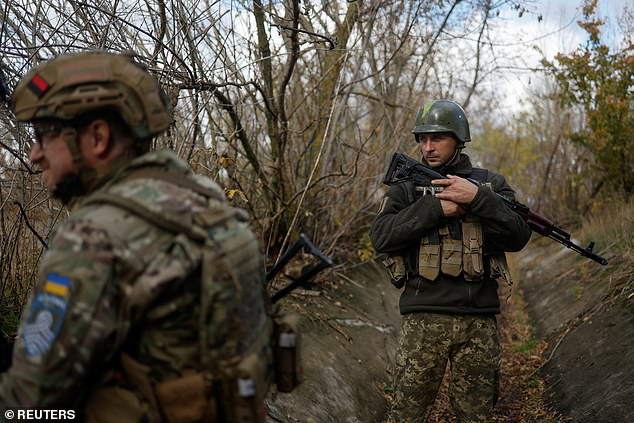 Ukrainian forces, some equipped with artillery supplied by the United States and other allies, have methodically shelled Russian fuel and ammunition bases and railway lines

During the address, President Zelensky described Russia’s approach: ‘This is where the craziness of the Russian command is most evident.

‘Day after day, for months, they are driving people to their deaths there, concentrating the highest level of artillery strikes,’ he said.

‘All of our soldiers who are defending their positions in these areas in Donetsk region are heroes.’

His words come as Putin continues to make increasingly threatening statements and propaganda, most recently presiding over a nuclear test launch on Wednesday.

Russian forces have repeatedly tried to seize the city of Bakhmut in an effort to stall the Ukrainian advance.

It is strategically important as it sits on a main road leading to the Ukrainian-held cities of Sloviansk and Kramatorsk.

Ukrainian advisor Oleksiy Arestovych said on Tuesday that on one particular day, the Russians had attacked Bakhmut eight times before lunch and been pushed back every time. 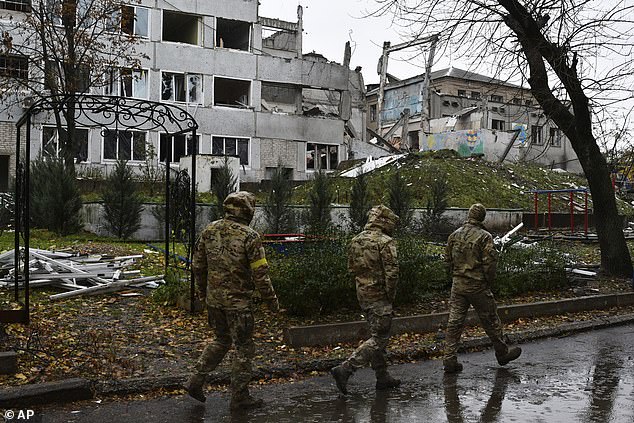 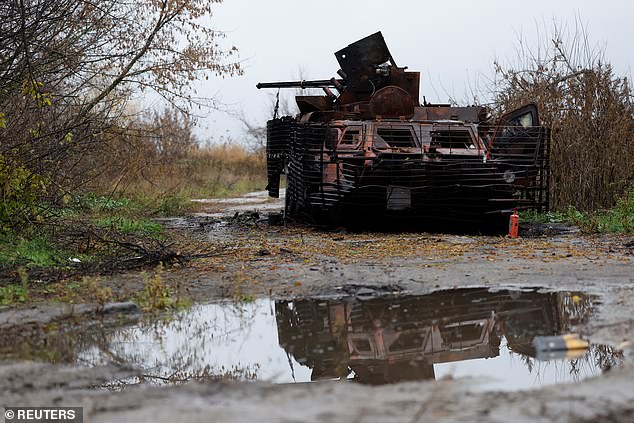 Pictured: A destroyed Russian military vehicle is seen lying in the middle of a muddy road 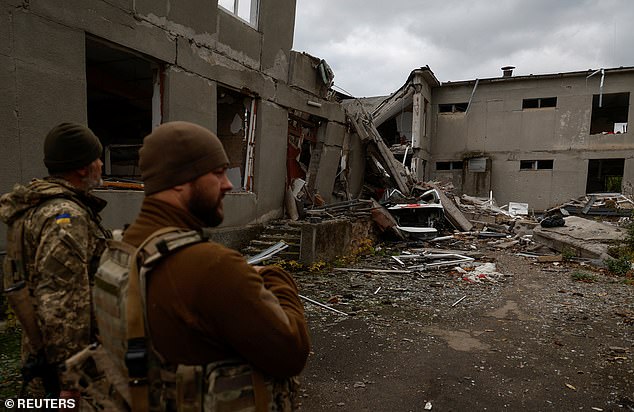 Zelensky did not mention what was happening near the southern city of Kherson, a city thought to be targeted by the country’s forces imminently.

It is currently held by pro-Moscow forces. Ukrainian troops say they expect a tough fight there.

‘Generally, we are strengthening our positions all over the frontline, reducing the invaders’ capabilities, destroying their logistics, and preparing good news for Ukraine,’ Zelensky added.

Ukrainian forces, some equipped with artillery supplied by the United States and other allies, have methodically shelled Russian fuel and ammunition bases and railway lines.

Zelensky also said that in the latest prisoner exchange between the two sides, 10 Ukrainians had been freed. 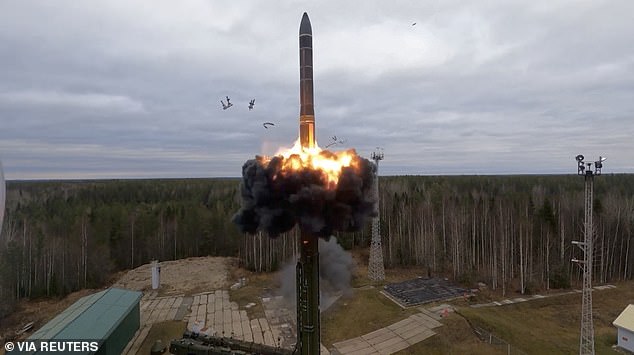 Russia rehearsed its response to a nuclear attack on Wednesday in an exercise involving nuclear submarines, strategic bombers and ballistic missiles at a time when tensions are high over a ‘dirty bomb’ allegation it has made against Ukraine 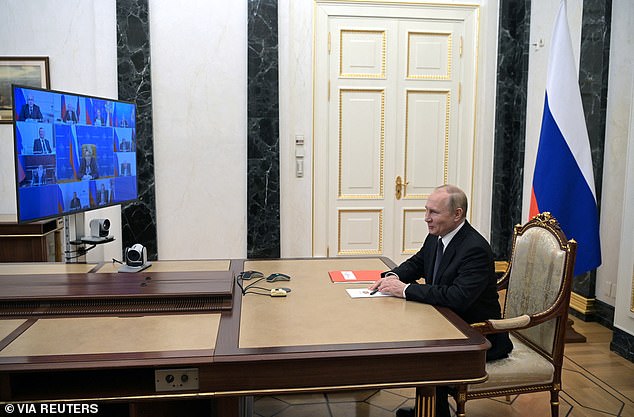 ‘We continue to do everything possible to free our people from Russian captivity.

‘Today we can finally announce the release of ten more Ukrainians. Our team engaged in the exchange process [and] is working without a break.

‘And I want to emphasize once again that any of our military units on the front line can accelerate the exchange process by taking hostages.

‘The more Russian servicemen we have in our exchange fund, the faster we will get Ukrainians back home from Russia.’

The despot remotely observed the annual exercise, called ‘Grom’ or ‘Thunder’, which uses test launches to put Moscow’s nuclear forces through their paces in a show of force to the West.

Defence minister Sergei Shoigu reported to Putin that the drills were intended to simulate a retaliatory ‘massive nuclear strike’ by Russia.

The drills involved the test-firing of a Yars land-based intercontinental ballistic missile from the northern Plesetsk launch site and the launch of a Sineva ICBM by a Russian nuclear submarine in the Barents Sea, just ten miles away from the shores of NATO member Norway. 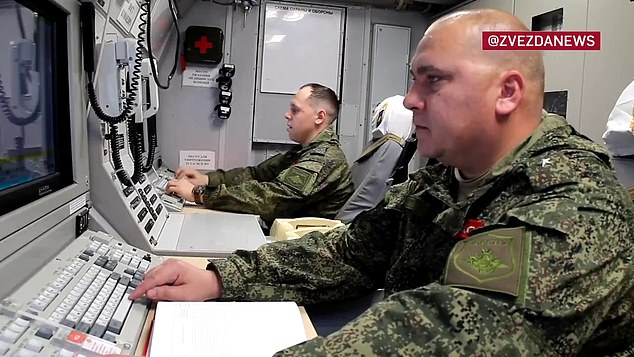 Such drills involving land, sea and air components have taken place on an annual basis in Russia to train the country’s nuclear forces and demonstrate their readiness

Footage shows a large nuclear submarine in the water during the simulation that featured multiple drills.

The manoeuvres followed Putin’s most recent warning about his readiness to use ‘all means available’ to fend off attacks on Russia’s territory in a reference to the country’s nuclear arsenals.

The Kremlin said that all tasks set for the exercise were fulfilled and all the missiles that were test-fired reached their designated targets.

Such drills involving land, sea and air components have taken place on an annual basis to train the country’s nuclear forces and demonstrate their readiness.

The Biden administration said on Tuesday that Russia gave notice it intended to stage routine drills of its nuclear capabilities.

The Pentagon and US State Department said Russia had complied with the terms of the last US-Russia arms control agreement in notifying Washington of the upcoming tests.

The Russian exercise comes amid Moscow’s warnings of a purported Ukrainian plot to detonate a radioactive device commonly known as a ‘dirty bomb’ in a false flag attack to blame Russia.

Ukraine and its allies strongly reject the allegation, and today NATO Secretary-General Jens Stoltenberg said: ‘This is absurd. Allies reject this blatantly false accusation, and Russia must not use false pretexts to escalate the war further.’

NATO’s Stoltenberg underlined that the 30-nation military organisation ‘will not be intimidated or deterred from supporting Ukraine’s right to self-defence for as long as it takes.’

Russia targeted more than 40 villages around Ukraine over the past day, Ukrainian officials said Wednesday, killing at least two people and sustaining the terror that forces people into air raid shelters each night.