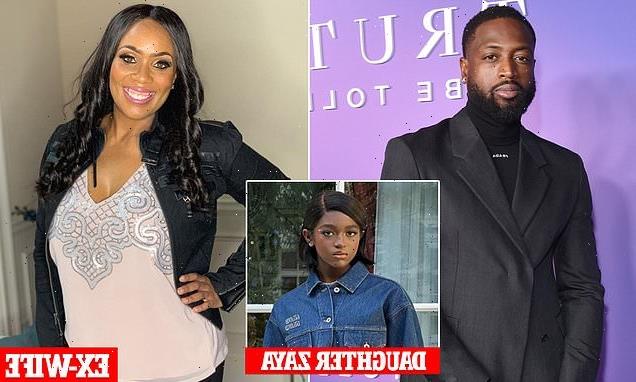 Retired NBA star Dwyane Wade has gone back to court to fight his ex-wife’s petition to stop their transgender daughter from legally changing her name and gender.

Wade, 40, argued that he had the ‘full authority’ to ‘make decisions on behalf’ of Zaya, 15, when he was awarded custody of his two children in 2011 against ex-wife Siohvaughn Funches-Wade, RadarOnline reports.

Funches-Wade had filed an objection to the Los Angeles County Superior Court in November over Zaya’s name change, accusing Wade of exploiting their daughter for financial gain.

In his latest filing, Wade said the allegations were ‘unsubstantiated.’ He also claimed that his ex failed to prove why the name change wouldn’t be in Zaya’s best interest.

Wade argued that a name change would ultimately allow Zaya to have an easier time: ‘from simple introductions and food orders, to applying for a driver’s license and filling out college applications.’ 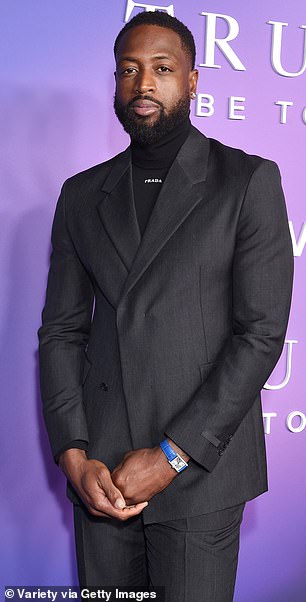 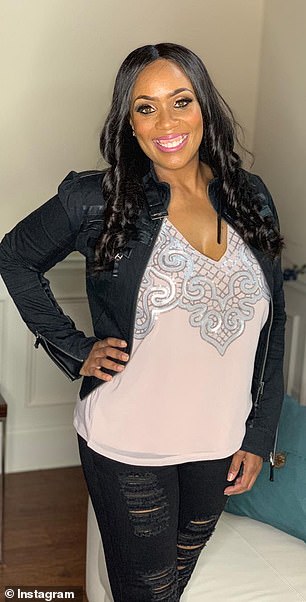 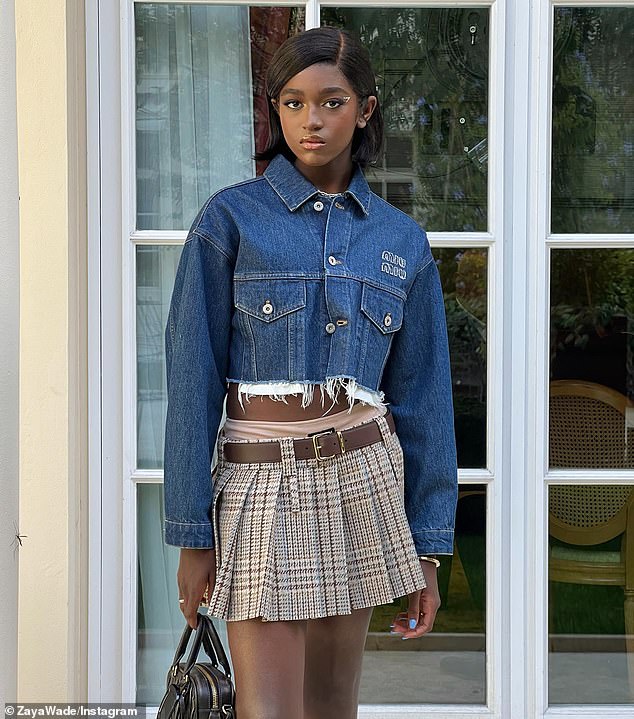 Zaya Wade (above), 15, has said she wants the name change after coming out as transgender. Wade says he has full custody over his kids and therefore doesn’t need his ex’s input

In response to the filing, Funches-Wade filed her opposition, saying she wants Zaya to wait until she’s 18 before changing her name and alleging that Wade was pushing for the name change for business.

‘I have concerns that (Dwyane) may be pressuring our child to move forward with the name and gender change in order to capitalize on the financial opportunities that he has received from companies,’ she said in her legal filing.

She also cited a conversation in April during which she claims Dwyane told her ‘that a lot of money had been already made and that additional money will be made in relation to our child’s name and gender issue.’

‘(Dwyane) told me that he intended to make our child very famous due to the name and gender issue and also informed me that there would be endorsements/contracts associated therewith,’ she claims.

Wade has called the petition ‘libelous’ and ‘nonsensical’ as he urged the court last month to allow for the name change so his daughter can ‘live more comfortably and honestly in all aspects of her life.’

The former Miami Heat star also accused her of cherry picking details from their custody battle, referencing documents she submitting saying that Wade would seek input from her when making major decisions regarding their two children.

One of the documents reportedly said: ‘Wade shall discuss with and obtain input from Funches on the major decisions affecting the care, welfare, activities, health, education, and religious upbringing of their two children.’

The documents Funches-Wade submitted, however, never stated that Wade actually needed permission from her to make any decision, as he has full custody of them, RadarOnline reports.

The former couple are due to see each other during a court hearing next week. 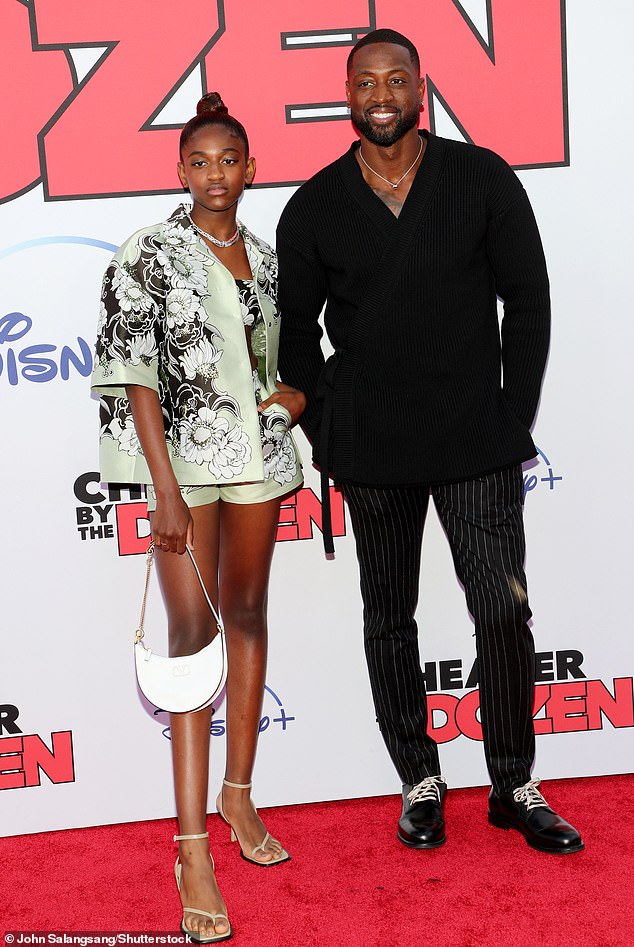 Wade has been a vocal supporter of his daughter’s gender identity. The two are pictured attending a Disney movie premier in March 2022 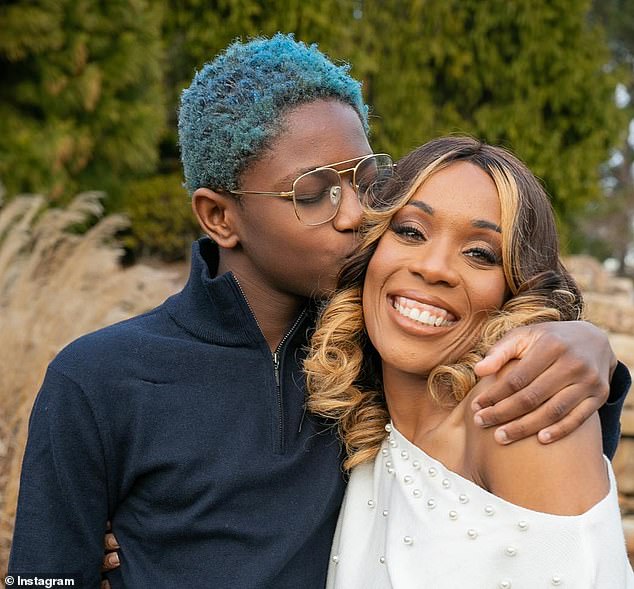 Siohvaughn Funches-Wade,wants Zaya to wait until she is 18 before legally changing her name and her gender from male to female

Following Wade’s criticisms against her petition, Funches-Wade snapped back, telling DailyMaili.com her children feel the ‘excruciating pain’ of their parents’ divorce and said her ex-husbands comments were ‘completely untrue and very hurtful.’

She added the entire situation is about their child, who ‘cannot protect and shield themselves’ as the world has a ‘front row seat to your failures.’

She only wants to shield her children from the ‘tragic events’ unfolding in the limelight, including bullying.

Funches-Wade said in a statement: ‘Thank you for the opportunity to respond to the recent derogatory statements made by Dwyane Wade, my ex-husband, about me as an African American woman, a mother and a believer in Jesus Christ.

‘First, these statements are completely untrue, and second they are very hurtful. Not only to myself, but more importantly to my children, who are as human, and subject to hurt and pain, as all other children, despite any lifestyle that they have been afforded.

‘They too, like many other children, have experienced the excruciating pain and unique challenges that children suffer when their parents are divorced.

‘I will not add to that pain by now responding publicly with malicious, or hate-filled, comments to Dwyane, despite his decision to say these harmful untruths about me. 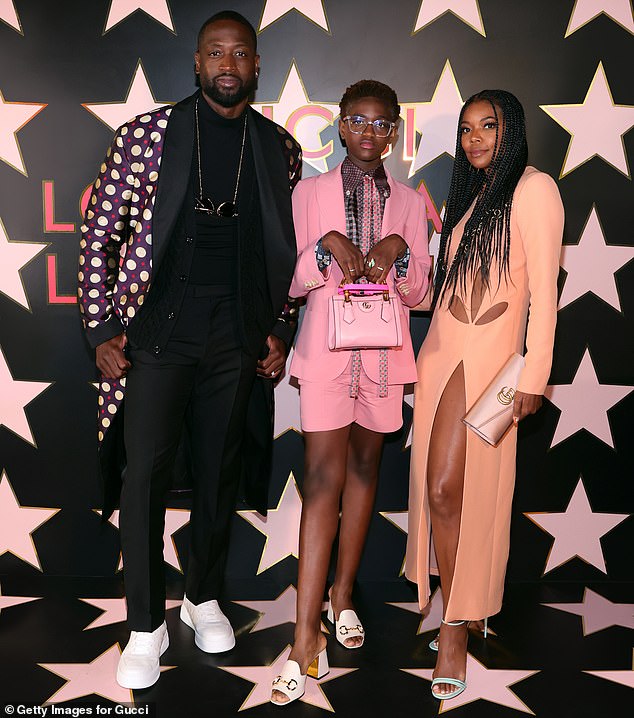 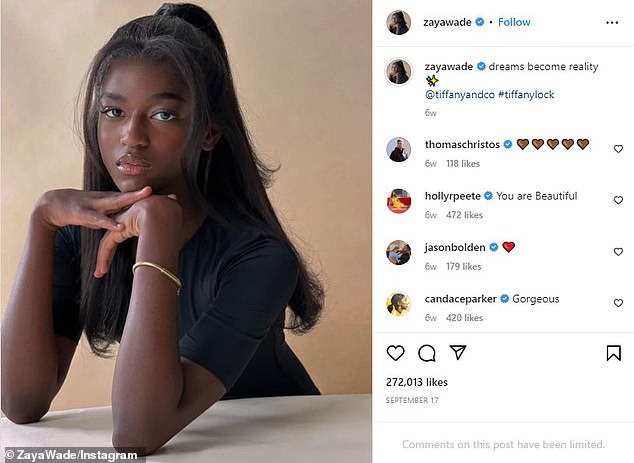 Among Zaya’s new modeling jobs is a contract with Tiffany. She appeared in a recent campaign for the jewelry brand

She added: ‘Dwyane is still the dad of my children and for my babies’ sake, I choose to refrain from speaking negatively about him.

‘If I had anything at all publicly to say to him it would only be one thing, ‘I forgive him again.’

‘It would only be this one thing, because this matter isn’t about him, or me, it’s about a child who otherwise cannot protect and shield themselves from the negative consequences that encompass living your life in view of the world.

‘Yes, the world will watch your triumphs, but they will also have a front row seat to your failures.

‘There are countless full-grown famous adults who have experienced this, and suffered severe consequences stemming from anxiety, depression and others are no longer with us because they took their own lives under this public pressure and scrutiny.’

In another statement against his ex, Wade lashed out at the notion he was pushing the decision and also took aim at his ex, calling her an ‘absentee parent’ who was selfishly putting herself at the center of their daughter’s transition.

‘Zaya is not the same 3 year (sic) child anymore and she is screaming that to the world but most importantly to her mother! No one in our house would ever force Zaya or any of our children to do anything against their will, much less force an identity on them.

‘This isn’t a game for my family and definitely not for Zaya. This is her life!’ 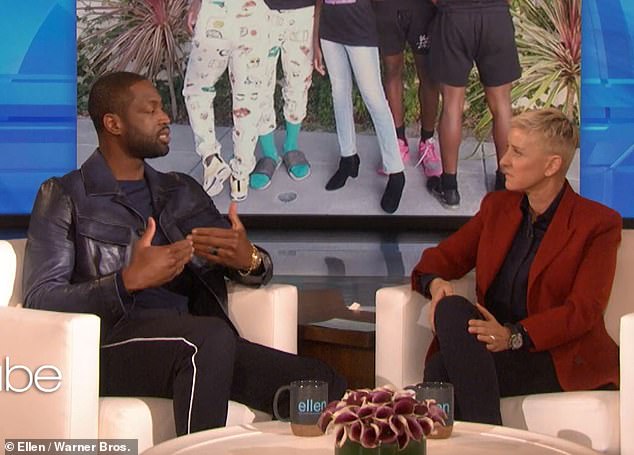 Dwyane has spoken openly and frequently about his daughter’s transition and is now an LGBTQ advocate. He is shown on Ellen, describing how Zaya came out to the family

Since 2019, the two described how Zaya came out to them, and how they now know her as her ‘authentic self’.

‘Our (then) 12-year-old came home…and said, ‘Hey, I want to talk to you guys. I think going forward, I’m ready to live my truth and I want to be referenced as she and her and I would love for you guys to call me Zaya,” he told Ellen DeGeneres during an appearance on her show.

In a later interview with People, he said Zaya’s transition gave him ‘hope’. He first spoke of her transition in 2019 on Matt Barnes’ podcast, All The Smoke.

‘I had to look myself in the mirror. When my son at the time was three years old and me and my wife start having conversations about us noticing that he wasn’t on the boy vibe that [older brother] Zaire was on.

‘I had to look myself in the mirror and say ‘what if your son comes home and tells you he’s gay?’ What are you going to do?

‘You’re going to talk about strength and courage. My 12 year old has way more than I have. You can learn something from your kids. In our household, that’s all we talk about. We talk about making sure our kids be seen by each of us. We want them to be whoever they feel they can be in this world. That’s our goal.

‘I watched my son, from day one, become into who she now eventually has come into.

‘And for me, it’s all about: Nothing changes with my love. Nothing changes in my responsibilities. So, all I had to do now is get smarter, educate myself more. And that’s my job,’ he said.