Voters have cut their support for the Coalition from 35 to 33 per cent and marked down Prime Minister Scott Morrison on his personal performance, giving Labor a strong lead at the halfway point of the federal election campaign.

Labor has held its primary vote steady at 34 per cent over the past two weeks and Opposition Leader Anthony Albanese has narrowed the gap with Morrison as preferred prime minister after disputes on the economy, security and climate change. 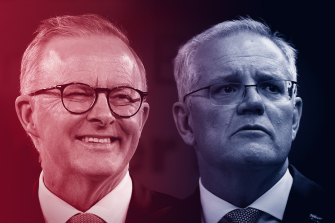 The exclusive survey, conducted by Resolve Strategic for The Sydney Morning Herald and The Age, also shows the Greens increased their primary vote from 11 to 15 per cent while Pauline Hanson’s One Nation and Clive Palmer’s United Australia Party rose from 4 to 5 per cent each.

When voters were asked to name the parties that would receive their preferences, the results showed Labor held a clear lead of 54 to 46 per cent over the Coalition in two-party terms.

More on the latest polling here.

It’s Monday, May 2. I’m Broede Carmody and I’ll be anchoring our live coverage for the first half of the day.

Here’s what you need to know before we get started.