A former soldier who war veteran Ben Roberts-Smith suspected of making damaging claims about him to the media had his home raided by police after a private investigator hired by the decorated soldier made a complaint about him to the Australian Federal Police.

Mr Roberts-Smith, a Victoria Cross recipient, conceded at his defamation trial in the Federal Court that he had told the private investigator that a former Special Air Service (SAS) comrade known as Person 6 had smuggled unregistered guns into Afghanistan in 2012 and still had one of the weapons in his possession in Australia. 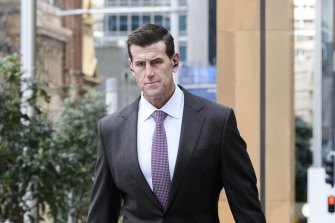 Ben Roberts-Smith arriving at the Federal Court in Sydney on Wednesday.Credit:Rhett Wyman

He said during cross-examination that he told the private investigator, John McLeod, it was “fine with me” if he passed the information on to his contacts or friends in the Australian Federal Police (AFP). However, Mr Roberts-Smith insisted he didn’t “instruct [Mr McLeod] to do anything”.

Mr Roberts-Smith said he had come to regard Person 6 as his enemy in about 2010, and by 2017 he believed the soldier was part of a whispering campaign against him in the media.

Mr Roberts-Smith said he told this to Mr McLeod in September 2017. An anonymous complaint about Person 6 was received the following month by the then-AFP Commissioner, Andrew Colvin, while a journalist at News Corp’s The Australian newspaper received an email from a “whistleblower” containing the same material.

Mr Roberts-Smith said that Mr McLeod told him “at some point” that he had sent a letter to the AFP but he didn’t know at the time that it was to the commissioner. He said he didn’t remember discussing with Mr McLeod if the material was given to a journalist at The Australian but said they “possibly” discussed it.

The newspaper published a story about Person 6 in November 2017, entitled “SAS soldier who questioned Ben Roberts-Smith accused of smuggling weapons to Afghanistan”. Asked if he agreed a reference to a “former SAS member” and “whistleblower” in the story referred to him, Mr Roberts-Smith said: “No.”

In a text message to his then-wife, Emma, Mr Roberts-Smith wrote in December 2017: “What happened to Person 6 will scare the others.”

The barrister for the newspapers, Nicholas Owens, SC, asked Mr Roberts-Smith why he waited until 2017 to tell anybody about Person 6 when the alleged conduct occurred in 2012. The former soldier said he had “no intention of attacking him for no reason” but “needed to expose his character” when he made up “completely false allegations about me”.

He denied that he was seeking to intimidate Person 6 into remaining silent.

Person 6’s house was raided by West Australian police, but Mr Roberts-Smith rejected a suggestion by Mr Owens that he told his then-wife that, “McLeod has helped to set up Person 6’s house to be raided”. No illegal weapons were found and no charges were laid as a result of the raid.

Mr Roberts-Smith is suing The Age and The Sydney Morning Herald, owned by Nine, and The Canberra Times, now under separate ownership, for defamation over a series of reports in 2018 that he says portray him as a war criminal. He denies all wrongdoing. The newspapers are seeking to rely chiefly on a defence of truth.

The court heard on Wednesday that Mr Roberts-Smith had met twice with former AFP Commissioner Mick Keelty, on June 15 and 20, 2018.

The former soldier has said Mr Keelty offered him support but did not discuss anything specific, including an inquiry by the Inspector-General of the Australian Defence Force into alleged misconduct of Australian forces in Afghanistan. He rejected a suggestion by Mr Owens that Mr Keelty told him on June 20 he “couldn’t meet with you any more” because the AFP had an “open investigation into you”.

Asked if he had destroyed a laptop in about June 2018 by pouring petrol on it and setting it alight, Mr Roberts-Smith said he had burnt hard drives before and could have done so in June 2018. He said he did this routinely when he wasn’t trading in a computer, in order to protect his passwords and other sensitive information.

He rejected a suggestion that he did so because he was aware at this point that there was an AFP investigation into his conduct in Afghanistan, and denied he was “beginning to panic”.

Mr Roberts-Smith also denied telling his former wife that he had sent an anonymous letter threatening another former soldier and had used gloves and printed it at Channel Seven in Queensland, where he works as deputy general manager, to stop it being traced back to him.

Mr Owens alleged the letter warned the soldier he had “one chance to save yourself” from murder charges, which was to tell the Inspector-General’s inquiry that he had “colluded with others to spread these rumours and lies about certain individuals”.

Asked why he arranged for the legal fees of one of the former soldiers who will give evidence for him to be “paid by or on behalf of” his employer, Kerry Stokes, who is also paying his own legal bills, Mr Roberts-Smith said: “I didn’t arrange it.”

But he agreed he had directed that soldier and two others to speak to his own lawyer, who then directed them to another lawyer.