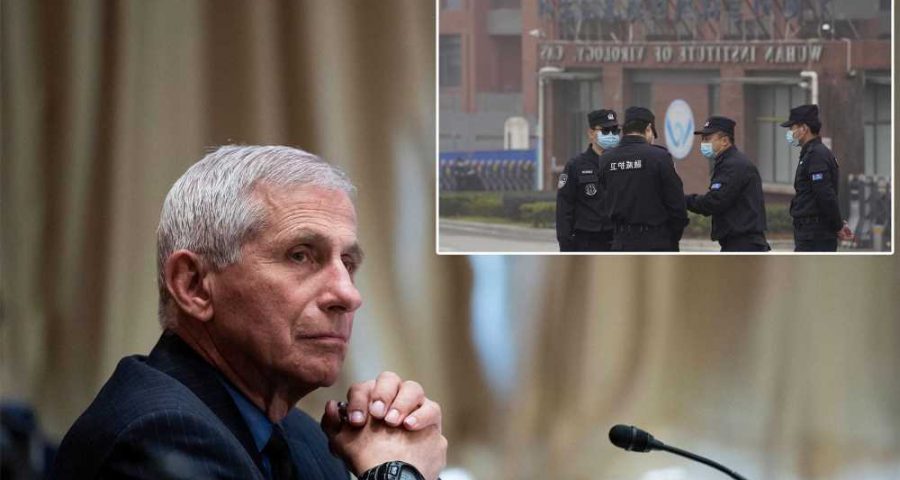 Cy Vance is targeting Trump but praised him in a 2016 letter: Devine

Bill de Blasio's NYC is a dark blast from the past: Devine

Dr. Anthony Fauci was absolutely adamant that the National Institutes of Health has never funded dangerous research on bat viruses in the Chinese lab suspected of being the source of the COVID-19 pandemic, when he was questioned by Republican Sen. Rand Paul two weeks ago.

“Senator Paul, with all due respect, you are entirely and completely incorrect that the NIH has not ever and does not now fund ‘gain of function’ research in the Wuhan Institute of Virology,” Fauci said in the fiery Senate hearing on May 11.

He couldn’t have been more certain.

Until he wasn’t certain a few hours later.

That very afternoon, Fauci admitted to “a very minor collaboration as part of a subcontract of a grant we had a collaboration with some Chinese scientists,” during an appearance at Poynter.org’s “festival of fact checking.”

It’s like being a little bit pregnant. The NIH either funded so-called gain-of-function research to juice up bat coronaviruses in China, or it didn’t. Turns out it did. And it did it by exploiting a loophole in an Obama-administration ban on the Frankenstein research put in place in 2014.

Fauci’s defensive answer at the Poynter event this month was in response to a mild-enough question about the coronavirus: “Are you still confident that it developed naturally.”

Rattled by the morning’s confrontation with Sen. Paul, Fauci for the first time admitted he was not at all confident the virus had ­developed naturally and maybe, just maybe, it could have come from a lab leak. But he still tried to have the last word against Paul.

“I think the real unfortunate aspect of what Senator Paul did is he was conflating research in a collaborative way with Chinese scientists which was, you’d almost have to say if we did not do that we would almost be irresponsible because SARS-CoV-1 [the coronavirus responsible for the 2003 Asian SARS outbreak] clearly originated in China and we were lucky to escape a major pandemic so we really had to learn a lot more about the viruses that were there, about whether or not people were getting infected by viruses, so in a very minor collaboration as part of a subcontract of a grant, we had a collaboration with some Chinese scientists. He conflated that . . . therefore we were involved in creating the virus which is the most ridiculous majestic leap I’ve ever heard of.”

Methinks he doth protest too much.

Paul, a medical doctor, did not allow Fauci to slide away as usual from a direct answer to the crucial question: did American taxpayers fund dangerous research to “juice up” bat viruses in the Wuhan Institute?

He answered no. But the correct answer is yes.

The NIH gave $3.7 million in funding to a New York-based nonprofit, EcoHealth Alliance, run by British-born Dr. Peter Daszak, who then, with the approval of the NIH, gave nearly $600,000 of that money to help fund the gain-of-function research on bat coronaviruses at the Wuhan Institute, and co-authored scientific papers with the scientist who conducted the lab’s research, China’s so-called batwoman, Shi Zhengli.

Daszak has been one of the most vocal opponents of the “lab leak” theory and has asserted that the virus probably emerged spontaneously from the wild.

Clearly he is conflicted on the question of the origins of the pandemic. Yet he was chosen by the World Health Organization as the only representative from America to take part in its fake investigation of the Wuhan lab overseen by Beijing in February.

No surprise Daszak and his WHO team comprehensively ruled out a leak from the Wuhan lab, and farcically suggested the virus might have been imported into China via frozen food such as Australian beef.

Daszak also was instrumental in shaping the early media narrative on the origins of the pandemic. In February 2020, he drafted an influential letter from 26 scientists published in The Lancet dismissing the lab-leak hypothesis as a “conspiracy theory” and insisting the virus emerged naturally. E-mails released under Freedom of Information laws revealed that he was the originator of the letter.

Did the gain-of-function research partly funded by the NIH result in a lab leak in Wuhan that caused the COVID-19 outbreak?

We don’t yet know for sure, but increasingly, this lab-leak theory is regarded by scientists and intelligence agencies around the world as the most likely cause of the pandemic. Yet until recently the theory was dismissed by the scientific establishment and most of the media as “debunked” and a “conspiracy theory.”

Fauci was the most influential debunker of the ­theory since the start of the pandemic.

He trashed the lab-leak theory about the origins of COVID-19 using all the authority of his office as the lead infectious-disease expert in the country, the director for 37 years of the National Institute of Allergy and Infectious Diseases, chief medical adviser to the president, and the founding expert on then-President Donald Trump’s coronavirus task force.

“If you look at the evolution of the virus in bats and what’s out there now, [the scientific evidence] is very, very strongly leaning toward this could not have been artificially or deliberately manipulated,” Fauci said last May.

“Everything about the stepwise evolution over time strongly indicates that [this virus] evolved in nature and then jumped species.

Fauci has changed his mind about almost everything else, from masks to herd immunity to opposing Trump’s ban on flights from China in January 2020.

But on this, potentially the most consequential of all of Facui’s errors, he had to be dragged kicking and screaming by Paul to a final acknowledgment of the ­obvious.