The pane of separation: The family behind the heart-wrenching picture that sums up so many grandparents’ coronavirus isolation share their story of devotion despite the turmoil

There will be some terrible images documenting this nightmarish era for the history books.

Then there will be ones like this: much-needed reminders that life — and love — will always find a way.

The poignant image of two little girls on one side of a very ordinary patio door, their elderly loved ones on the other, went viral on Thursday. 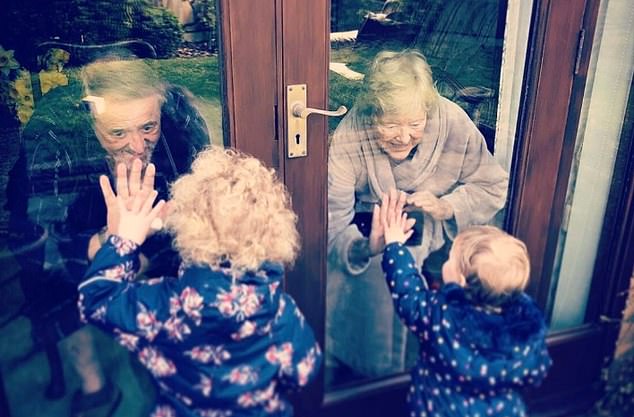 Ray is the proudest of grandfathers — old school, a stickler for standards (Vickie warns me he likes Granddad to be spelled with two Ds in the middle ‘or he will be writing in’). Theresa’s life is her family. ‘The thought of not seeing them was terrible,’ she admits

The sight of sisters Florence, three, and Edith, one, pressing their hands against the glass, as their great-grandparents did the same on their side, summed up our national plight.

It made us cry, but also cheer. It offered hope, at a time when that seems in short supply.

Like so many of us, the members of this family — headed by Ray Cossey, a former commercial director of Norwich City Football Club — have been separated by the coronavirus pandemic.

Ray and his wife Theresa are 81 and on the vulnerable list. Theresa, who received an MBE for her work as president of a breast cancer charity, only came out of hospital last week, following a second operation for her own stage-two breast cancer. She also has Parkinson’s disease.

She is a sensible sort. Doctors asked if she was sure she wanted to go ahead with her procedure, to remove a tumour and some lymph glands, on Friday the 13th. She said yes: do what needs to be done.

The Cosseys are a close family, in all senses. Ray and Theresa have two children, six grandchildren and eight great-grandchildren. 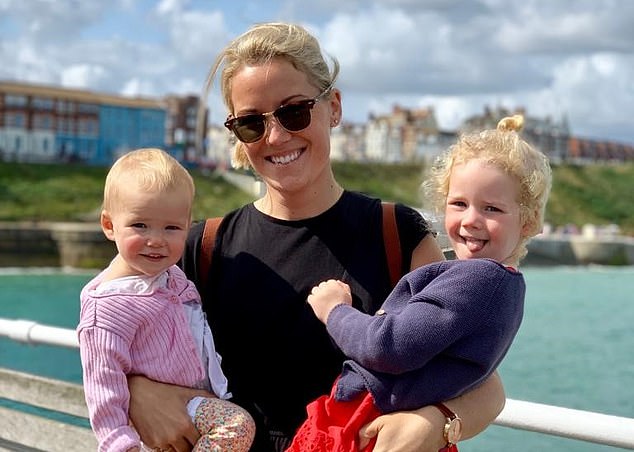 Imagine their delight then when on Tuesday morning there was a rap at the kitchen window, as they were eating breakfast. It was their grand-daughter Vickie, who, before, had always brought her own two little ones to visit every Tuesday morning for coffee and cake. ‘I decided that we were going to go anyway,’ Vickie, 30, explains

All but two of the extended family live within a ten-mile radius in Norfolk. They are the sort of family who expect to be together through thick and thin, yet Ray and Theresa are self-isolating, following official advice.

They are not that breed of octogenarians who have resisted closing themselves off.

‘Some people are being laissez-faire about it, but we are not,’ Ray says, firmly.

‘With my wife’s health, we cannot be. Besides, we see it as our duty to not put an extra strain on the NHS if it is avoidable.

‘We don’t have to go out to work so let’s accept this thing.’

When ‘this thing’ started, the Cosseys accepted that, however heartbreaking it was for all involved, they would not see their grandchildren and adored great-grandchildren again for weeks, even months.

Imagine their delight then when on Tuesday morning there was a rap at the kitchen window, as they were eating breakfast.

It was their grand-daughter Vickie, who, before, had always brought her own two little ones to visit every Tuesday morning for coffee and cake.

‘I decided that we were going to go anyway,’ Vickie, 30, explains.

‘Not in defiance of their self-isolation, but in a way that would get round it. I got the girls’ waterproofs in the car, with their ride-on toys and some big chunky chalks, and we set off for Nanna and Granddad’s. I parked at the front and we snuck round the back.

‘Then I rapped on the window and when they came to it, I kind of shoved daffodils from our garden through it — I threw them in really — and said “not coming in, not coming in, but the girls are going to play in the garden, if that’s OK”. I told them to get the phone, I’d Facetime them and chat that way.

‘So that’s what we did. For an hour my girls played. They did a bit of digging in a couple of plant pots. They got on their little ride-ons. We got the chalks out and they did drawings on the patio.

‘Florence showed off her alphabet and wrote her name for them. I said “let’s draw a sunshine so Nanna feels warm” and Florence drew a big sun. We had a lovely time. Nanna and Granddad were still in their dressing gowns — I’d interrupted their breakfast — but they drew their chairs up and just watched.

‘We had the phones on speaker and just chatted away, like we normally would. We couldn’t give them a big hug, but the girls could put their hands to the glass. I drove away with a tear in my eye, but it was a comfort to all of us.’ It’s hard not to well up, but this is the sort of story we are all going to need in the days ahead. Obviously it wasn’t a normal Tuesday.

‘It was a bit sad. I felt a little like we were looking at them through a goldfish bowl,’ admits Vickie. But it offered a very simple solution to a widespread dilemma.

‘There’s no way we would put Nanna and Granddad at risk, but I know just getting to see the girls lifted their spirits. Ours too. We’re going to do it again if we can. I would urge anyone to.’

So what did Ray and Theresa make of it all? Still in isolation, I telephoned the devoted great-grandparents to ask how it felt from their side of the glass, and could tell they were still on an emotional high.

‘We just accepted we wouldn’t see the children, so to be able to just watch them play as normal was wonderful,’ says Ray. ‘So many grandparents and great-grandparents are going to miss that, and it’s such a loss.

‘Not everyone will be geographically close enough to do this, I know, but maybe families with young children could consider letting them play in the gardens of elderly neighbours. Just to see children play gives everyone a lift.’ It is a delightful thought and they are a lovely family.

Ray is the proudest of grandfathers — old school, a stickler for standards (Vickie warns me he likes Granddad to be spelled with two Ds in the middle ‘or he will be writing in’).

Theresa’s life is her family. ‘The thought of not seeing them was terrible,’ she admits.

‘And no cuddles. I give all the grandchildren big hugs, even the ones in their 30s.’

When concerns over coronavirus started to mount, the family quickly realised they would have to adapt. Vickie had planned a birthday party for her husband Edd last Sunday. Thirty people had been expected, but that number dwindled to 11.

It went ahead, hugs barred, but it became a ‘final hurrah’, she says. ‘And we told Nanna and Granddad that they could not come.’

After the party, Vickie, Edd and their daughters went into isolation too.

‘Edith had a kidney removed just after her first birthday because it wasn’t working properly, so we don’t want to take any chances with her either. It’s awful, but our attitude is “this is what has to be done. Let’s keep calm and just carry on”. 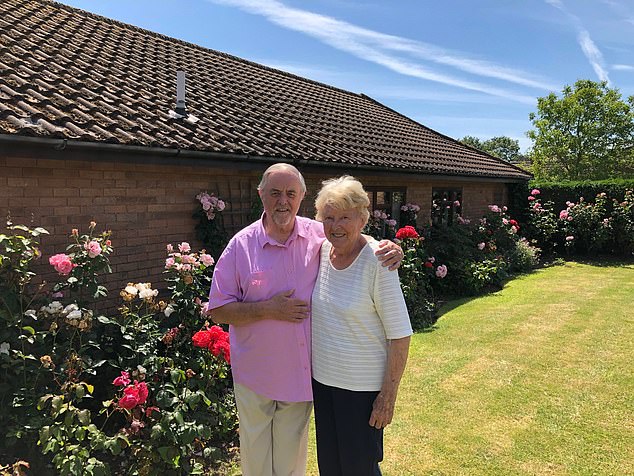 Still in isolation, I telephoned the devoted great-grandparents to ask how it felt from their side of the glass, and could tell they were still on an emotional high. ‘We just accepted we wouldn’t see the children, so to be able to just watch them play as normal was wonderful,’ says Ray

’Before this Vickie worked part-time as an administrator for a small business. She has taken unpaid leave to look after her family.

‘I’m trying to look at it as a blessing, time to spend time with the girls. We’ve bought seeds and we are going to grow vegetables.’

Edd, who works for finance company Worldpay, is now working from home. ‘We know we are lucky he still has a job,’ says Vickie.

What have they told the children? ‘I said “you know when you get poorly, other people can get poorly too.

Well, we are trying to stop the poorliness, but it’s OK because they can still wave, just not go inside”. I tried to brush it off, really. They are young enough to see it as an adventure,’ says Vickie.

Like every family in Britain, the Cosseys have ripped up their diary and are slowly getting to grips with this new reality.

Ray and Theresa had planned a holiday in the south of France for the summer, when Theresa should have regained some strength. It won’t happen now. Before, their life was active. Theresa was always rushing off to meetings and events.

Are they moaning, though? Absolutely not. Their positivity is inspiring. ‘Self-isolation is not fun,’ says Ray. ‘The walls start closing in. You can go in the garden, but apart from that there is no meaningful contact with anyone. It’s upsetting.

‘Tomorrow there is a funeral for my 92-year-old friend. I’ve known him for 60 years. I can’t go. Well, I could, but it would be irresponsible. We simply have to accept this. Life throws us curveballs and it’s a question of how we deal with them. It’s how you present the bat to the ball.’

Not for him the panic-buying stampede. Nor the loo roll frenzy. ‘Why are people doing that? Does coronavirus give you the trots? No.’

He has urged those members of his family who can still venture out to do so with caution.

‘I’ve told them to buy disposable gloves — the ones you get in packs of 100 — and wear them, then throw them away. Follow the advice.’

He is trying to keep busy at home. ‘I have done the ironing,’ he says, as Theresa is making an omelette for them. The family have rallied around, helping them stock up with groceries.

‘And we’ve got together with a neighbour to do it online with Ocado,’ says Theresa.

‘This is all horrible, but it won’t last for ever. We will get through it.’

She says they are lucky to have a big enough house to not be on top of each other all day (they live in a large American-ranch style bungalow). ‘We have a study and a lounge, so there is space.’

They will venture out, but with extreme care. ‘We went on a car ride down to Great Yarmouth the other day,’ says Theresa.

‘Didn’t get out. Didn’t see anyone, but it’s lovely to just look at the sea.’

And then there are those patio doors, which are going to need a polish every Tuesday by the sound of things (with Theresa and Ray wearing those disposable gloves).

Today, the chalk sun is still out on the flagstone, catching the eye and offering a very specific type of warmth.

‘Vickie reassured me that the chalk scribblings the children made on the patio will wash off with the first rain,’ says Ray. ‘But it’s rather nice to see it there.’