Washington: Dr Anthony Fauci accused Senator Rand Paul, in a Senate hearing on Wednesday AEDT of making false attacks on him to raise campaign funds that have encouraged people to make threats on Fauci’s life.

Fauci, the director of the US National Institute of Allergy and Infectious Diseases and President Joe Biden’s chief medical adviser on coronavirus, has drawn criticism throughout the pandemic from Paul and other conservatives who question the science behind coronavirus vaccines, masks and other public health guidance and have made false claims that Fauci is part of a conspiracy that led to the creation of the coronavirus in a Chinese lab. 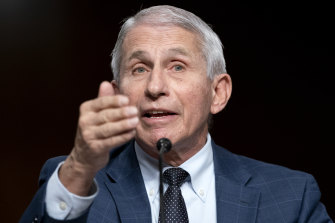 Dr Anthony Fauci, director of the National Institute of Allergy and Infectious Diseases and chief medical adviser to the president, accused Republican Senator Rand Paul of raising money off of criticism of him.Credit:AP

After Paul confronted him at a Senate health committee hearing, a clearly furious Fauci demanded to speak uninterrupted. He called Paul’s attacks a distortion of reality, and cited the arrest of a California man in Iowa last month who police said was travelling to Washington with an AR-15 and multiple magazines of ammunition, who had a “hit list” including Fauci and several others, mostly Democratic politicians and officials.

“What happens when he [Paul] gets out and accuses me of things that are completely untrue?” Fauci said of Paul.

“All of a sudden that kindles the crazies out there, and I have life – threats upon my life, harassment of my family and my children with obscene phone calls because people are lying about me. 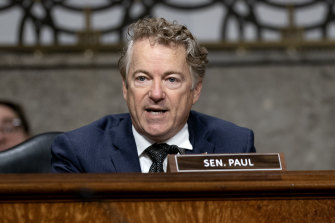 “Well, it makes a difference because, some of you may know, just about three or four weeks ago on December 21, a person was arrested who was on the way from Sacramento to Washington, DC, at a speed stop in Iowa. And they asked, the police to ask him where he was going, and he was going to Washington, DC, to kill Dr Fauci.”

A police report confirms the arrest of Kuachua Brillion Xiong, 25, on December 21 in Iowa, with an AR-15 and multiple magazines of ammunition. 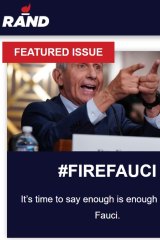 Fauci said that in trying to understand why Paul is coming after him, he has gone to the senator’s website, which says “‘Fire Dr. Fauci’ with a little box that says contribute here. You can do $US5, $US10, $US20, $US100.

“So you are making a catastrophic epidemic for your political gain,” Fauci said.

The criminal complaint filed in Xiong’s case says that he was travelling to Washington and had a “hit list” including Fauci and others. An attorney for Xiong has filed a notice of insanity defence.

Senator Mitt Romney, a Republican, spoke out in support of Fauci and other scientists from the Biden administration testifying, without criticising Paul by name, in an otherwise strongly partisan hearing.

“ . . . But I do want to point out how much I personally, and I believe the great majority of the people in our country, respect you individually and professionally for the work that you do. You are scientists, not politicians. Nevertheless, you are being made subject to the political whims of various political individuals. And and that comes at a high cost.”