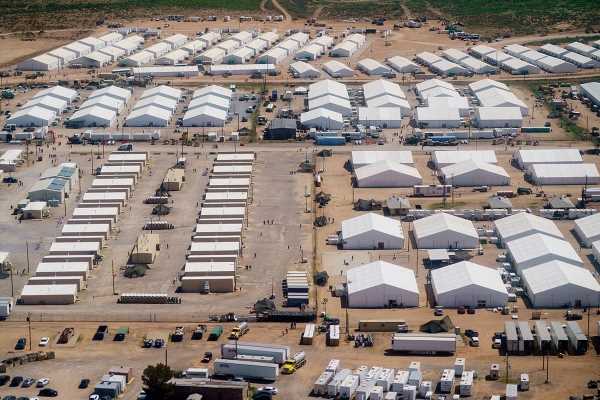 A FEMALE US soldier was allegedly assaulted by a group of male Afghan refugees at Fort Bliss as she arrived for work at midnight.

The FBI has confirmed that officials are investigating after the soldier alleged she was assaulted by male evacuees at the Doña Ana complex in New Mexico.

Unnamed sources told ABC-7 that the soldier claimed she was allegedly attacked at about midnight by at least three Afghan men near her car, after she arrived at the complex for duty.

The sources added that the assault was not sexual, the soldier did not need to be taken to hospital, and is "physically fine", the broadcaster added.

Lieutenant Colonel Allie Payne, the director of Public Affairs at Fort Bliss, said: “We can confirm a female service member supporting Operation Allies Welcome reported being assaulted on September 19 by a small group of male evacuees at the Doña Ana Complex in New Mexico.

"We take the allegation seriously and appropriately referred the matter to the Federal Bureau of Investigation."

Payne added: "The safety and well-being of our service members, as well as all of those on our installations, is paramount.

"We immediately provided appropriate care, counseling and support to the service member."

Her statement went on: "Task Force-Bliss is also implementing additional security measures to include increased health and safety patrols, additional lighting, and enforcement of the buddy system at the Doña Ana Complex.

"We will cooperate fully with the FBI and will continue to ensure the service member reporting this assault is fully supported."

The FBI has not shared details of the alleged assault.

However, the agency told Fox News the woman reported that she had been allegedly assaulted by a "small group of male evacuees" on September 19.

"We received the referral from Fort Bliss and our office is investigating the allegation," FBI public affairs officer special agent Jeanette Harper told the broadcaster.

The Sun Online has contacted Fort Bliss for comment.

US area representative Yvette Herrell tweeted: "My prayers are with the courageous soldier and her family."

She alleged that it was "yet another tragic failure in the vetting process for Afghan nationals", adding, "the American people deserve answers".

Fort Bliss is a military base where Afghans airlifted out of Afghanistan are being screened – amid questions about how the government is caring for the refugees and vetting them.

Nearly 130,000 were flown from Kabul in one of the largest mass evacuations in American history.

Members of Congress have questioned whether the screening is thorough enough.

Many of the Afghans who worked for the US government have undergone years of vetting already before they were hired, and then again to apply for a special immigrant visa for American allies.

The investigation into the alleged assault follows a US Department of Justice report into two unrelated cases, where two people were charged with crimes while at Fort McCoy, Wisconsin.

We take the allegation seriously and referred the matter to the Federal Bureau of Investigation.

Mohammad Haroon Imaad, 32, has been charged with assaulting his wife by strangling and suffocating her. The indictment alleges that the assault occurred on September 7, 2021.

They made initial appearances in Madison on September 16 and are being detained at the Dane County Jail.

If convicted, Noori faces a mandatory minimum penalty of 30 years and a maximum of life in federal prison, said the department in a statement.