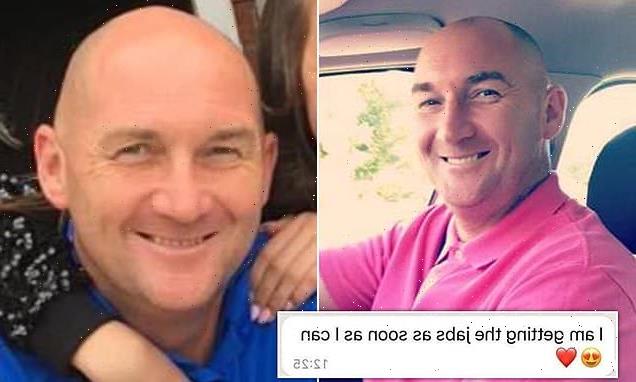 ‘I’m getting the jabs as soon as I can’: Heartbreaking text sent by ‘fit and healthy’ father-of-three, 45, who died from Covid after refusing vaccine because he was ‘influenced by all the talk on social media’

A father-of-three sent a heartbreaking text saying he was getting vaccinated as soon as possible less than two weeks before he died from Covid.

Stephen Doyle, 45, from Runcorn, Cheshire, was ‘fit and healthy’ before he was struck down with the virus and rushed to hospital on December 22.

He had not taken the vaccine as a result of reading lies about the jabs on social media and died just 12 days later on January 3.

His cousin Michelle Pierce, a nurse at Llandudno Hospital in north Wales, said: ‘He was against the vaccination before he went in. 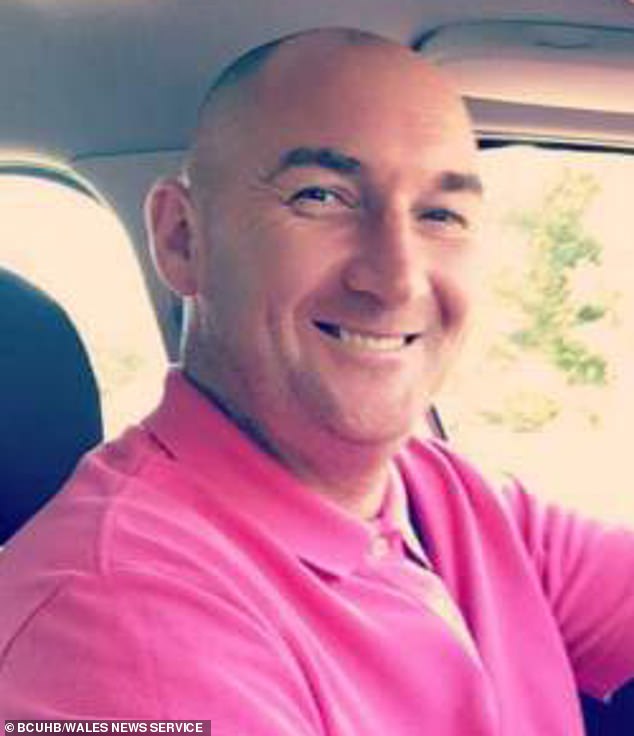 Stephen Doyle, 45, from Runcorn, Chesire, died from coronavirus after refusing to have the vaccine

‘He was influenced by all the talk on social media.

‘When Stephen was in hospital he texted his former partner Nichola and said, “I’m getting the jabs as soon as I can”.

‘He said he never wanted to go through this again.

‘He was a funny guy. He liked to make people laugh and was always up for laugh.

‘He loved spending time with his kids and making them all happy. 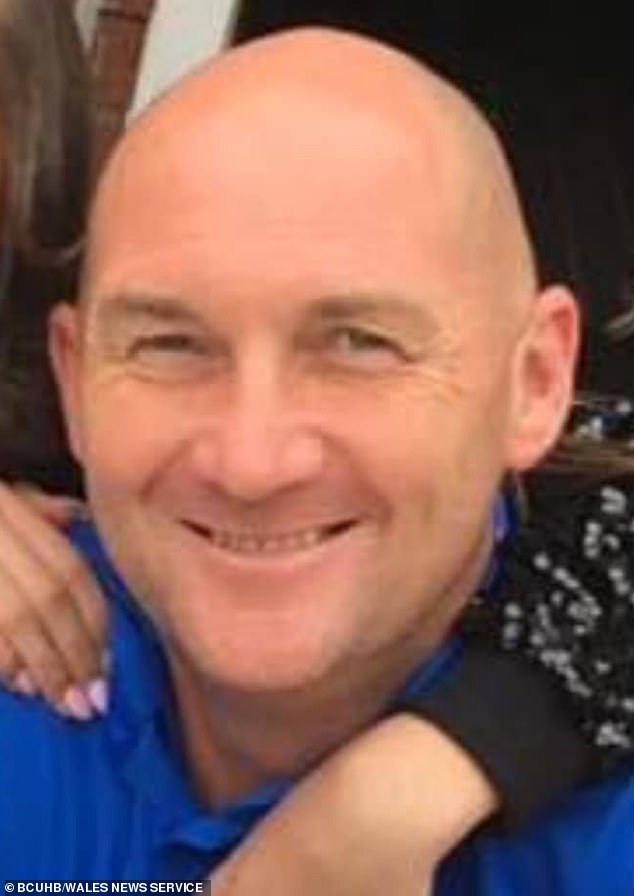 ‘Sadly, he never got the chance to get vaccinated. It was too late for him.

‘He had no underlying health conditions. He was fit and healthy.’

The former docker was working as a dispatch supervisor at the time of his death and had already been in hospital because of Covid but was discharged with antibiotics in mid-December.

His former partner Nicola, the mother of his three children, found him unwell on December 22 and called an ambulance.

Mr Doyle was readmitted to Warrington hospital with breathing difficulties and very low oxygen levels in his blood.

Within a day he was moved to the hospital’s intensive therapy unit and was put on a ventilator on Christmas Day. 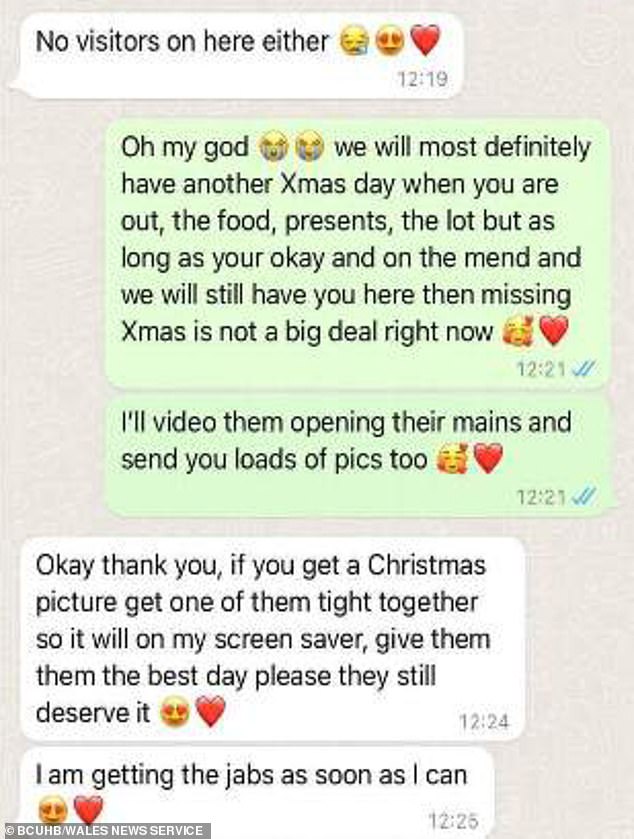 Mr Doyle told his former partner Nicola he was ‘getting the jabs as soon as I can’. Nicola told him the family would have another Christmas when he was out of hospital. Yet tragically he died on January 3 from Covid after both his lungs collapsed

Clinicians had to insert four drains into his chest to help him breathe.

Ms Pierce added: ‘On January 3 [the doctors told us] there was nothing they could do, so the decision was taken to withdraw the treatment.’

Mr Doyle’s family called for more people to take the vaccine to protect themselves against the virus.

Ms Pierce said: ‘People need to know this is happening to healthy people.

‘If we can save one person by making them get their vaccinations, it’s worth telling our story.’

Three main types of vaccines have so far been used in the fight against Covid-19 around the world, but more are in trials and under development.

This type includes AstraZeneca, and uses a modified adenovirus to deliver DNA coded with a SARS‑CoV‑2 protein to spark the body’s immune system into action. A similar mechanism is also used in the Russian Sputnik V and Chinese Convidecia vaccines which have been rolled out in China, Russia, Mexico, Brazil, Argentina, Chile, Ecuador, Moldova, Belarus, Hungary, Serbia, Pakistan, the Philippines, Indonesia, Malaysia and the United Arab Emirates. The US-made Johnson & Johnson jab is also the same type but was initially only a single-dose vaccine, until US authorities recommended a second booster shot in October 2021.

The two other vaccines currently approved in Australia – Pfizer and Moderna – both use this platform to deliver Covid-19 immunity. Both contain RNA or messenger RNA in a drop of fat which then causes some cells to develop a harmless version of the SARS-CoV-2 spike protein to kickstart the body’s resistance to the disease. Side effects are very rare but the vaccine needs to be stored at a very low temperature, which causes distribution challenges, especially in third world countries. A freeze-dried version is currently under development which would not need to be kept cold. It has been approved and used throughout the world except for a handful of countries including Russia and China.

These are more traditional forms of vaccines which take laboratory-cultivated Covid-19 virus particles and kill them with heat or formaldehyde but still retain the proteins needed to create an immune response when injected. It is the same type of technology that was used in the 19th and 20th century against cholera, plague, typhoid and rabies. It’s the mechanism behind the Chinese CoronaVac/Sinovac, BIBP and WIBP vaccines, India’s Covaxin, Russia’s Covivac, Kazakhstani QazVac, and Iran’s COVIran Barekat.

Often known as protein vaccines, this a controversial new technology which just uses a small piece of protein to create the immune response. Critics claim the proteins may be too small to be recognised by the human immune system. The vaccines are largely still in testing, but Russia has authorised its EpiVacCorona for use, along with Turkmenistan. China, Uzbekistan, Indonesia and Malaysia are also using a Chinese version, ZF2001. The US-produced Covovax has been undergoing trials in Australia, Mexico and India and has been authorised in Indonesia and the Philippines.

These nasal spray vaccines are the holy grail against Covid – easy to distribute and easy to use, with no needle fear. So far there are no nasal spray vaccines for Covid-19, but there is one for the flu – brand-name FluMist in the US and FluEnz in Europe – which may see a Covid version developed eventually.

New technologies that are being developed that could be used in the fight against Covid include virus-like particles, which mimic the virus without including any virus material, DNA vaccines which uses genetically modified cells to re-write the body’s blueprint to fight the disease, lentivirus vaccines which inject new genes into the body to make it immune, conjugate vaccines which is a two-pronged varied of protein vaccines, and using a harmless variant of the rabies virus vesicular stomatitist – currently used as a ‘trojan horse virus’ to help fight AIDS – which also carries the Covid-19 spike protein.