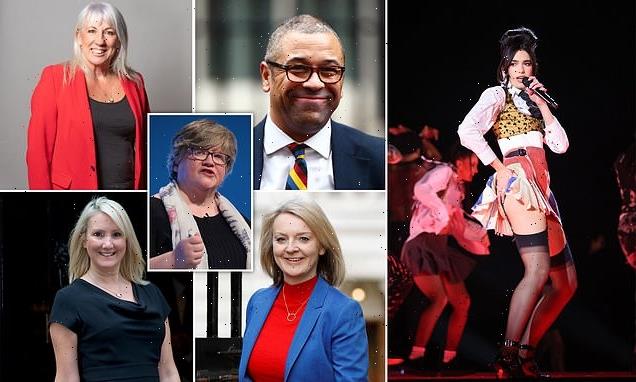 Five ministers are being investigated by Parliament’s sleaze watchdog after they enjoyed a free night out at the glitzy Brit Awards.

International Trade Secretary Liz Truss and Work and Pensions Secretary Therese Coffey are among the top Tories being probed for allegedly failing to reveal that they were given free tickets worth as much as £900 each to the bash.

Even culture minister Caroline Dinenage is facing questions over whether or not she should have declared her attendance at the star-studded event.

Science minister Amanda Solloway and Foreign Office minister James Cleverly are the other senior Government figures to have been placed under an official probe by Parliamentary Standards Commissioner Kathryn Stone. 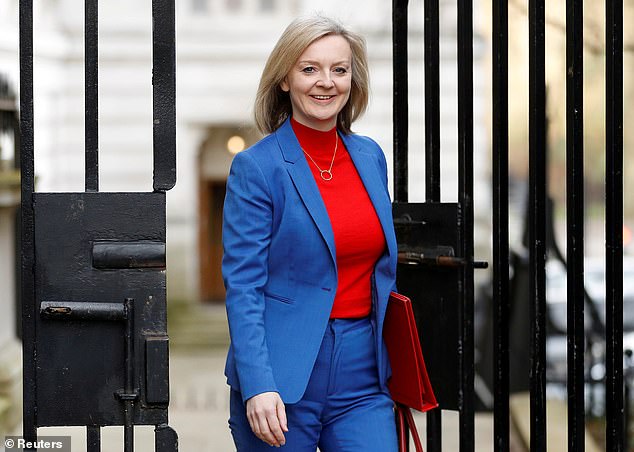 Five ministers are being investigated by Parliament’s sleaze watchdog after they enjoyed a free night out at the glitzy Brit Awards ceremony. Pictured: International Trade Secretary Liz Truss

Tory backbencher Nickie Aiken as well as Labour frontbenchers Chi Onwurah, Alex Sobel and Conor McGinn are also alleged to have breached Parliament’s Code of Conduct. This requires them to update the Register of Members’ Financial Interests within 28 days of receiving gifts, payments or hospitality.

It is the first time that such a large group of ministers has been placed under investigation by the watchdog.

And it risks fuelling resentment towards a ‘one rule for them’ culture in the Government, as the Brit Awards took place on May 11 when tight Covid restrictions were still in place across most of the country.

At that time, under the reopening roadmap, pubs and restaurants could only serve customers outdoors while only 15 people could attend weddings. 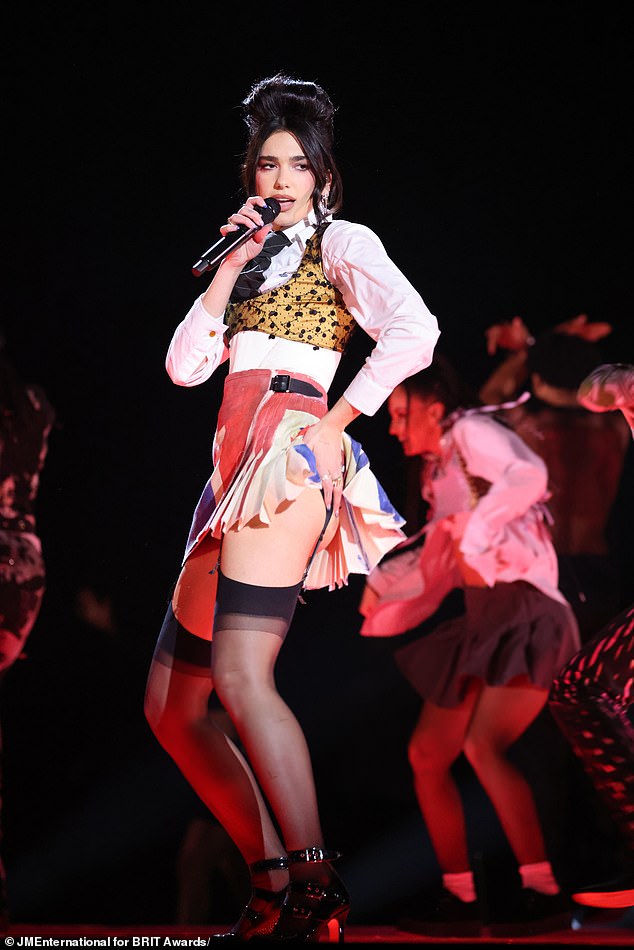 The top Tories are being probed for allegedly failing to reveal that they were given free tickets worth £900 each to the bash. Pictured: Dua Lipa performs during The Brit Awards 2021

Although indoor concerts were banned at that time, the music industry bash at London’s O2 Arena was designated as a pilot under the Government’s Events Research Programme.

This meant 4,000 could attend without needing to wear face masks or sit apart from each other.

They were treated to the first major live music event for more than a year with performances from stars such as Sir Elton John and Dua Lipa, and guest appearances from Taylor Swift and Little Mix.

Many of the MPs lucky to be invited were given free tickets by industry body UK Music – chaired by Labour’s former deputy leader Tom Watson – or organisers BPI and enjoyed box seats.

Some of the politicians present were quick to declare their freebies to the Parliamentary authorities. 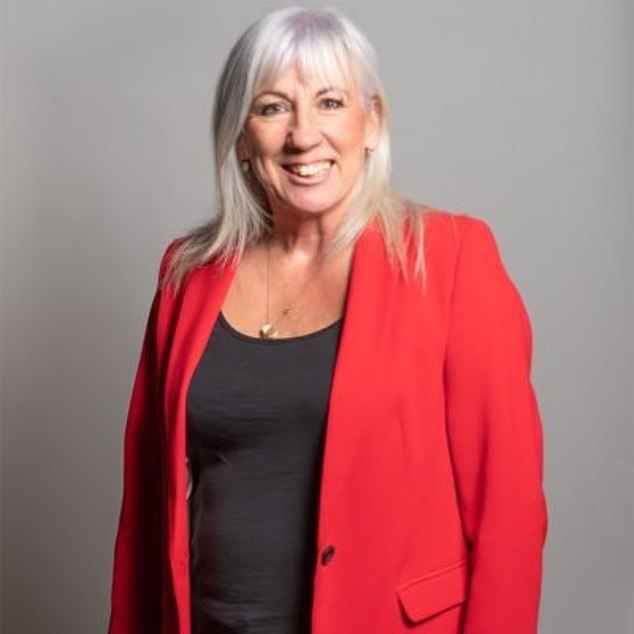 It is understood the four female ministers under investigatio didn’t believe it was necessary as they were invited to the awards ceremony in a ministerial capacity. Pictured: Science minister Amanda Solloway

But others, including Mr Cleverly, Mrs Aiken and Mr McGinn registered their tickets more than a month later, meaning they were technically in breach of the rules.

One MP said that they ‘held their hands up’ as soon as they realised the declaration was late, admitting: ‘It’s just embarrassing.’

Mrs Aiken said she wasn’t originally advised of the cost but has since ‘explained the situation, apologised and collaborated with the investigation’.

Miss Onwurah told the Mail that she has also apologised, saying: ‘It was an administrative oversight, nothing more, and it has now been declared.’

However the four female ministers under investigation – Miss Truss, Miss Coffey, Mrs Dinenage and Mrs Solloway – have still not declared their tickets in the Register of Members’ Interests. 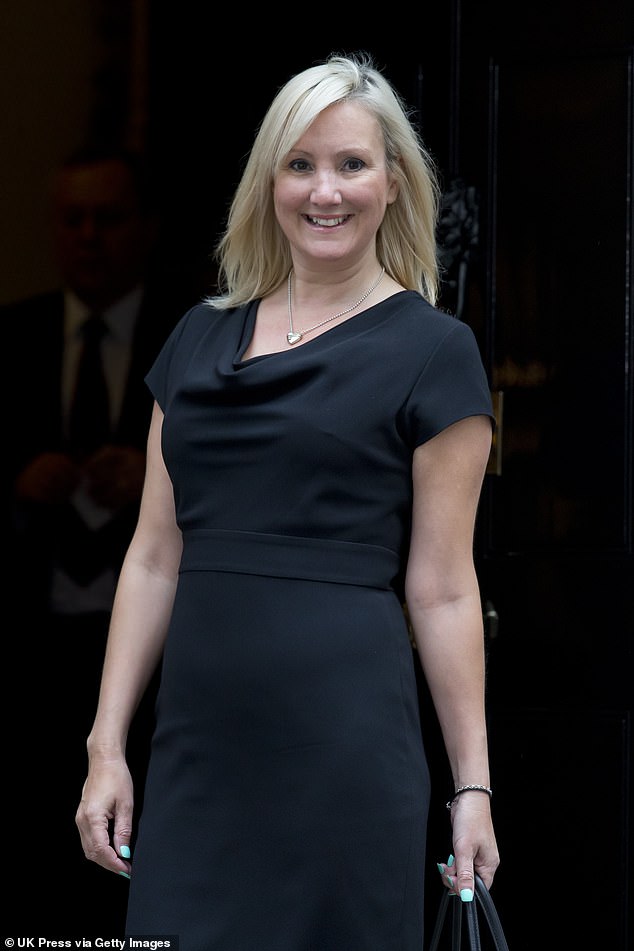 It is understood they didn’t believe it was necessary as they were invited to the awards ceremony in a ministerial capacity. This means their attendance would be declared in the lists of hospitality, which are published every three months.

A source said Mrs Dinenage’s ministerial brief covers the music industry and so it was ‘not a jolly’ for her.

Mrs Solloway’s brief covers intellectual property such as copyright – crucial to showbiz – while Miss Truss was there because pop music is a major export market for Britain.

Some MPs found to have committed serious breaches of the code can be forced to apologise to the Commons – or even face bans from the chamber.

However, there are concerns within Whitehall that the probe has been ‘overzealous’. Those who failed to declare their Brits tickets in time are likely to be allowed to simply write an apology to Miss Stone.