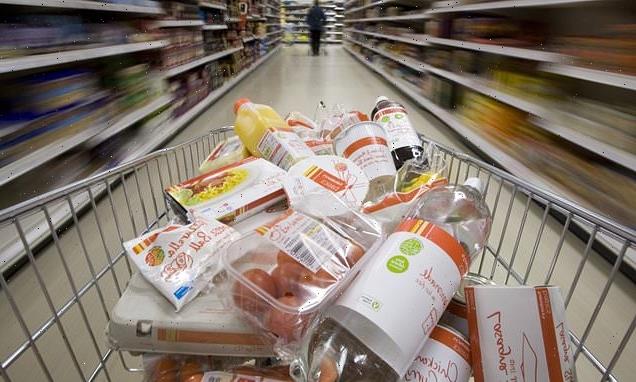 Food bills could soar by up to £682 a year as grocery price inflation hits record 14.7% amid warnings it could continue to rise ‘with no peak in sight’

Food bills could soar by up to £682 a year as grocery price inflation hits a record 14.7% – amid warnings it could continue to rise with ‘no peak in sight’.

Sales of supermarket own-label products jumped again by 10.3% over the latest four weeks and the cheapest value ranges grew by 42% as shoppers sought to manage their budgets, according to Kantar.

Just over a quarter of households (27%) say they are struggling financially – double the figure recorded last November, the research firm said.

Fraser McKevitt, head of retail and consumer insight at Kantar, said: ‘Yet again, we have a new record high figure for grocery price inflation and it’s too early right now to call the top.

‘Consumers face a £682 jump in their annual grocery bill if they continue to buy the same items, and just over a quarter of all households now say they’re struggling financially, which is double the proportion we recorded last November.

‘Nine in 10 of this group say higher food and drink prices are a major concern, second only to energy bills, so it’s clear just how much grocery inflation is hitting people’s wallets and adding to their domestic worries.’ 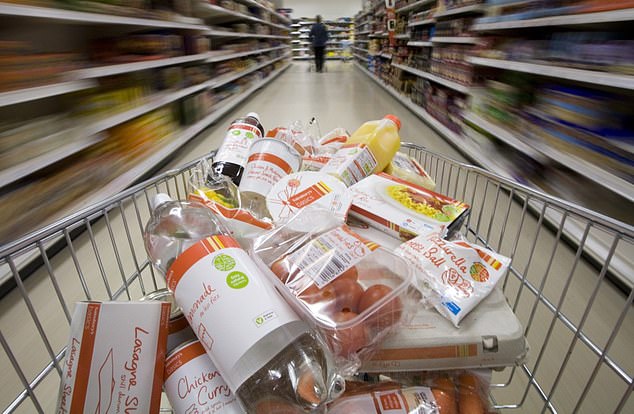 Sales of supermarket own-label products jumped again by 10.3% over the latest four weeks and the cheapest value ranges grew by 42% as shoppers sought to manage their budgets, according to Kantar 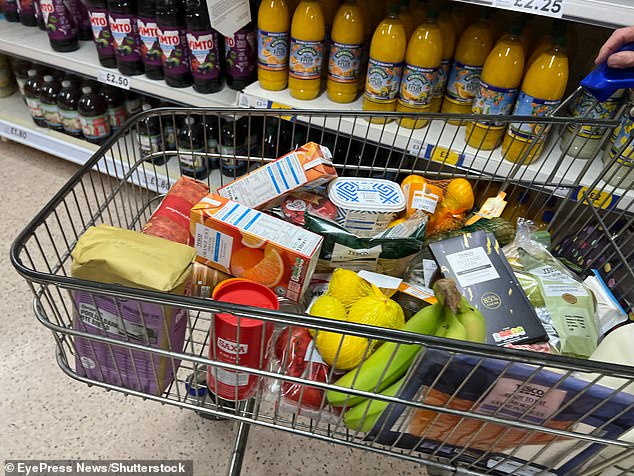 Just over a quarter of households (27%) say they are struggling financially – double the figure recorded last November, the research firm said

Some consumers found light relief at Halloween, and just over one in 10 households bought a pumpkin in October, although sales were down compared with last year.

Fewer people stocked the cupboards for Christmas in October, preferring to wait until later in the year.

Mr McKevitt said: ‘This time last year two million consumers had already bought their festive Christmas pudding. We’ve seen 32% fewer shoppers doing that this time around, suggesting people are not trying to spread the cost of their purchasing – at least not in October.’

Aldi was the fastest growing retailer in the latest period, increasing its sales by 22.7% year on year to gain 9.2% market share, while Lidl boosted sales by 21.5% to take its market share to a new record of 7.2%.

Asda again led the traditional Big Four supermarkets with sales growing by 5.3% to maintain an overall market share of 14.3%.

Mr McKevitt said: ‘With economic forecasters warning of a potential recession, it’s worth reflecting on how much the grocery landscape has changed since the 2008 financial crash.

It comes as consumer watchdog Which? today highlights the top areas of the UK which are most likely to struggle to get affordable food.

Birmingham, Hodge Hill was named the constituency most at risk for access to such necessities.

This part of East Birmingham has poor online delivery access and high levels of fuel poverty. It’s also categorised by low incomes and no car access.

Which’s Priority Places For Food Index brings together several key indicators for the first time to highlight where people need support most – and gives an indication of the types of interventions that may be most relevant for particular areas, the group says.

A spokesman added: ‘This has implications for local as well as central and devolved governments.

‘By highlighting how these priority places relate to constituencies, it can help bring political attention to the different types of challenges people are or will be facing – and who is best placed to help them.’

The index shows that some priority places have been categorised as such because they are areas with high levels of deprivation.

But others may have issues that relate to accessibility of affordable food, poor proximity to supermarkets or other food outlets and low levels of e-commerce activity so online deliveries are more difficult.

Some areas may face a combination of all of these factors.

David Fletcher, who works in the Hodge Hill foodbank, says: ‘When people are faced with a choice of putting food on the table or switching off the central heating, or when parents feel they can only feed the children but not themselves; it can be very distressing.

‘There is a real sense of feeling a gap that has been created. People do slip through a gap and need help.’

The ten-point action plan for supermarkets compiled by consumer watchdog Which?

1. Make unit pricing prominent, legible and consistent in-store and online so price comparisons are easy across different brands and sizes of packaging.

2. Provide clear unit pricing for promotional offers in-store and online so that people can work out whether they really are the best deal.

3. Provide a basic range of essential budget lines for affordable as well as healthy everyday choices that are available across stores, but particularly in locations where people most need support.

5. Tailor marketing budgets and promotions, including through loyalty cards, vouchers and other offers, to support people where they are most likely to be struggling.

6. Promote the uptake of the healthy start and best start foods scheme, with a particular focus on the priority local areas where there is a low level of uptake.

7. Provide additional support or ‘top ups’ where people are able to be identified as in particular need – for example linking them to the healthy start or best start foods schemes and other targeted promotions.

8. Offer straightforward price reductions rather than multi-buy offers that require a bigger initial spend, may lead to more food waste and can make it more difficult to eat healthily.

10. Underpin these actions by promotions, recipes and advice that make lower-priced, healthy and sustainable foods tasty and appealing to the breadth of communities that are served.