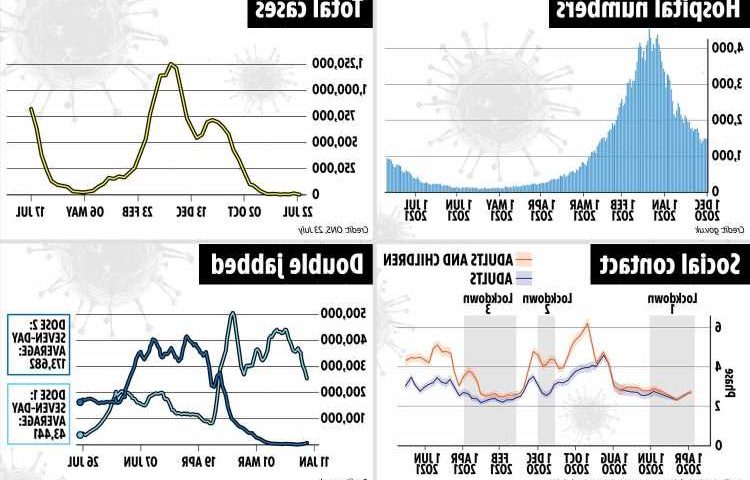 THERE are four key graphs that will reveal if the third Covid wave has really peaked.

Hopes have been raised after seven days of falling case numbers, but experts have warned caution at this stage. 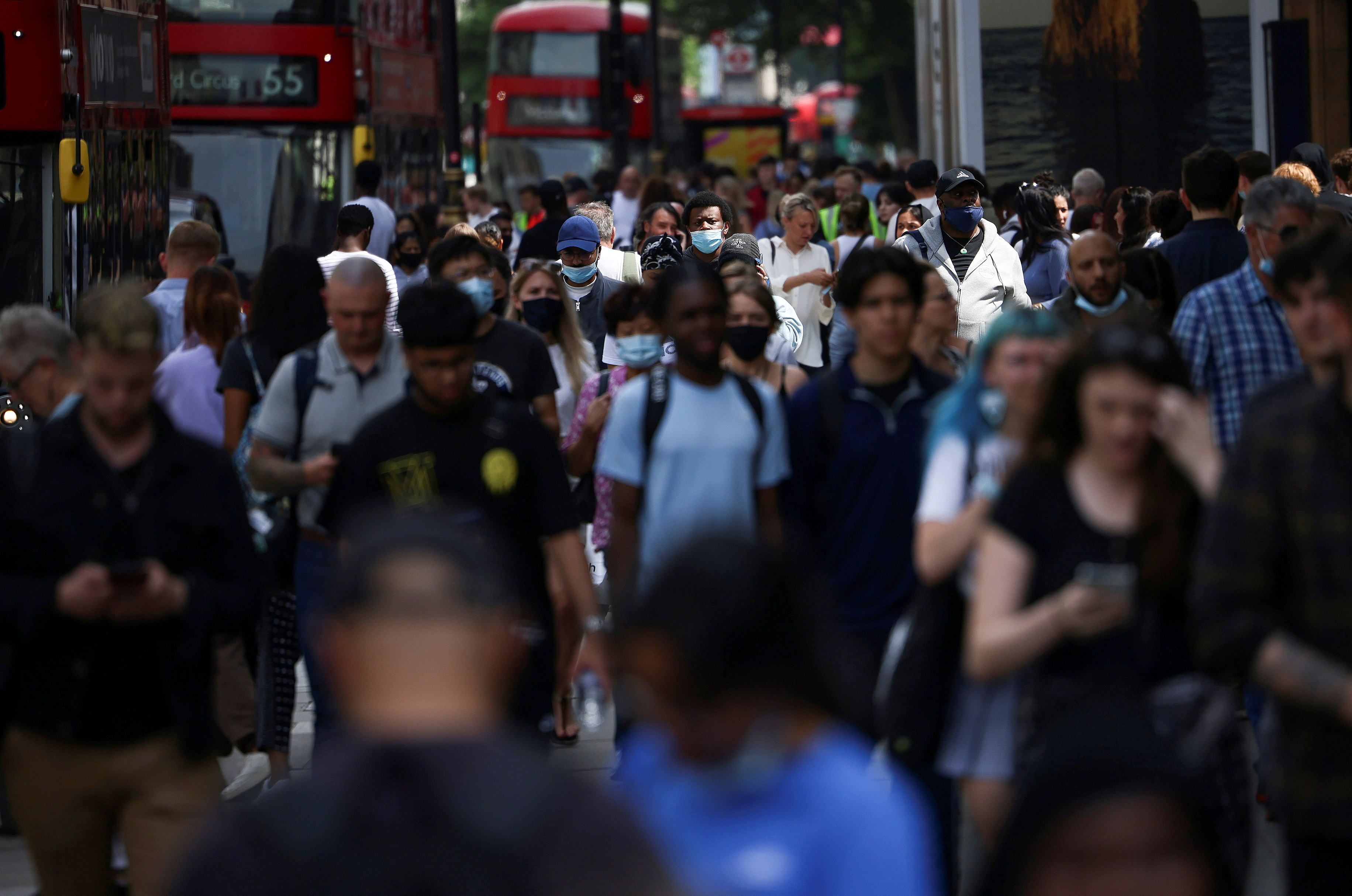 The effects of relaxing all restrictions won't yet be seen, and some scientists say the fall in cases is due to summer holidays and a lack of testing.

But aside from this, there are a number of data sets we should keep an eye on, that will truly show if the downturn is here to stay.

The main indicator, and the figure that shows how the country is really coping, is the number of new hospital admissions.

While daily Covid case numbers are the most punchy and up to date, they don't always paint the full picture.

It also doesn't always indicate how the population is faring against the virus, but hospital admissions do.

When new patient numbers start to drop after a rise, that is when experts breathe a sigh of relief.

It gives a better picture of how well we are managing with any rise in cases, and how strongly the vaccines are working against the virus.

Hospitals numbers will always be a few weeks behind the cases, so we should see what is happening in a fortnight before we fully celebrate the downturn.

At the moment, admissions are still rising, but the hope is they will start to dip in a week or so. 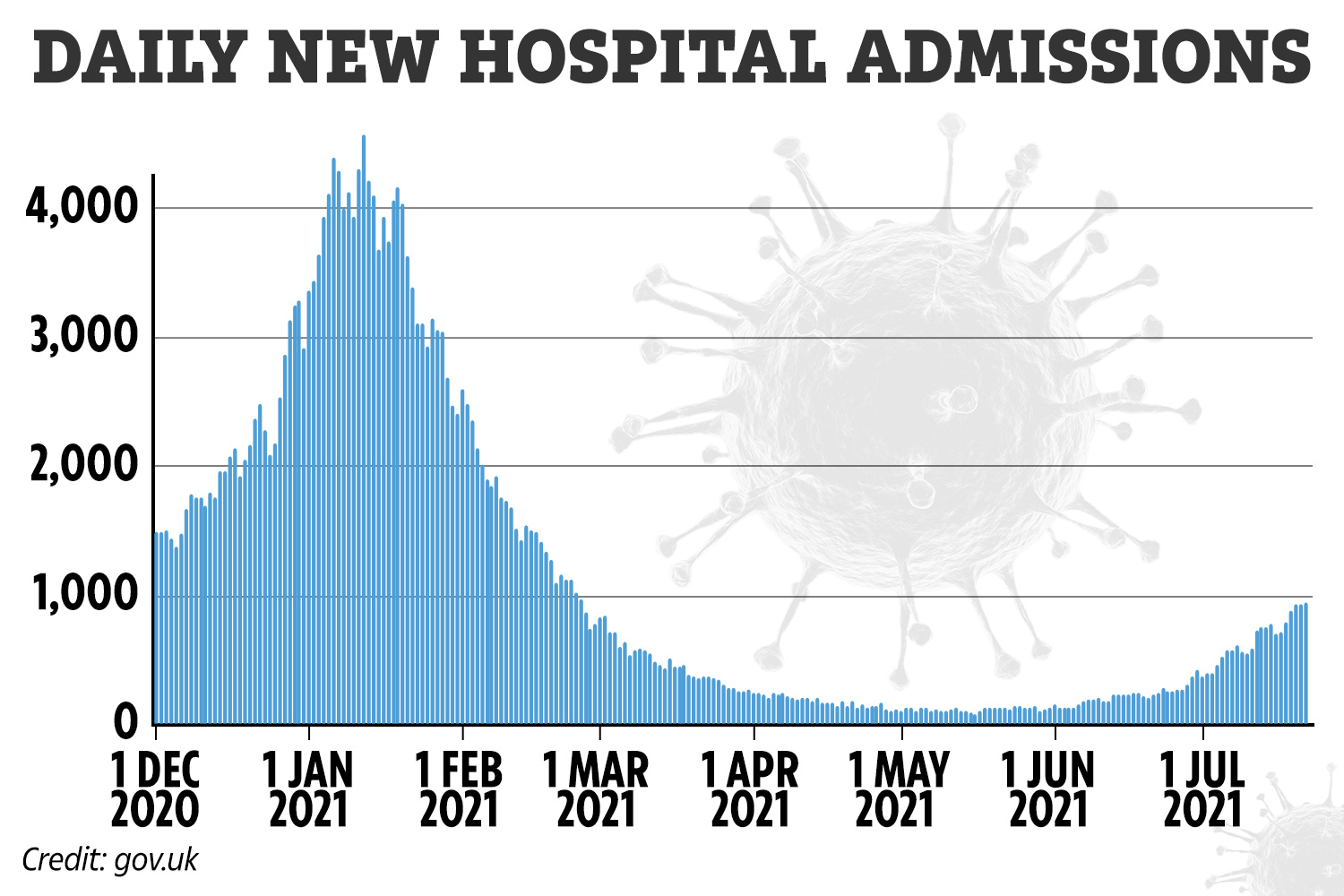 There are a number of groups that estimate how many people they think have Covid in the UK each week.

And these are more useful for the overall picture than the daily figures released by the Government.

This is because the Government cases only include people who have gone and got a PCR test.

Some people may have only had a lateral flow test and not reported it, or not known they had the virus, or not got tested at all – so many won't be logged.

However the figures every Friday from the Office for National Statistics picks people at random and tests them every few weeks, to gather more precise information abut the cases knocking about. 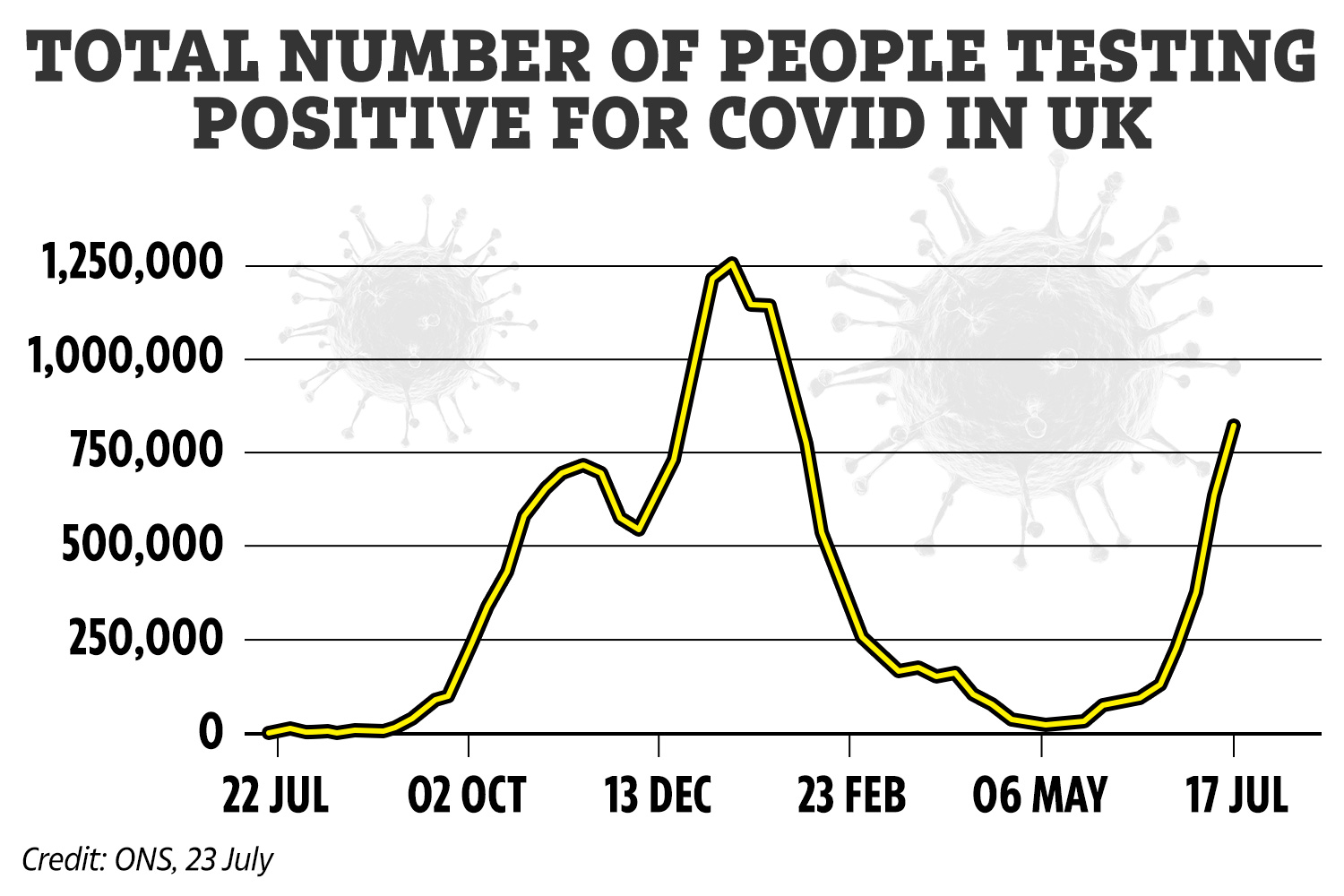 The UK's vaccine rollout has been impressive, and has created a good blockade in front of the virus.

More than 150,000 people are getting their second dose of a Covid vaccine at the moment.

This is far greater than the new infections each day, and means there are millions now fully protected against catching the virus and getting seriously ill from it.

But no vaccine is perfect, and some will still get sick, and others are choosing not to have the jabs or aren't rushing to get their second dose.

The double jabbed numbers are going to slow soon, which means protection will come instead through infections – which will have a worse impact.

In order to stay on top of the virus we need the double jabbed figures to keep soaring, but the fear is they will start to slump soon, leaving many people still unprotected. 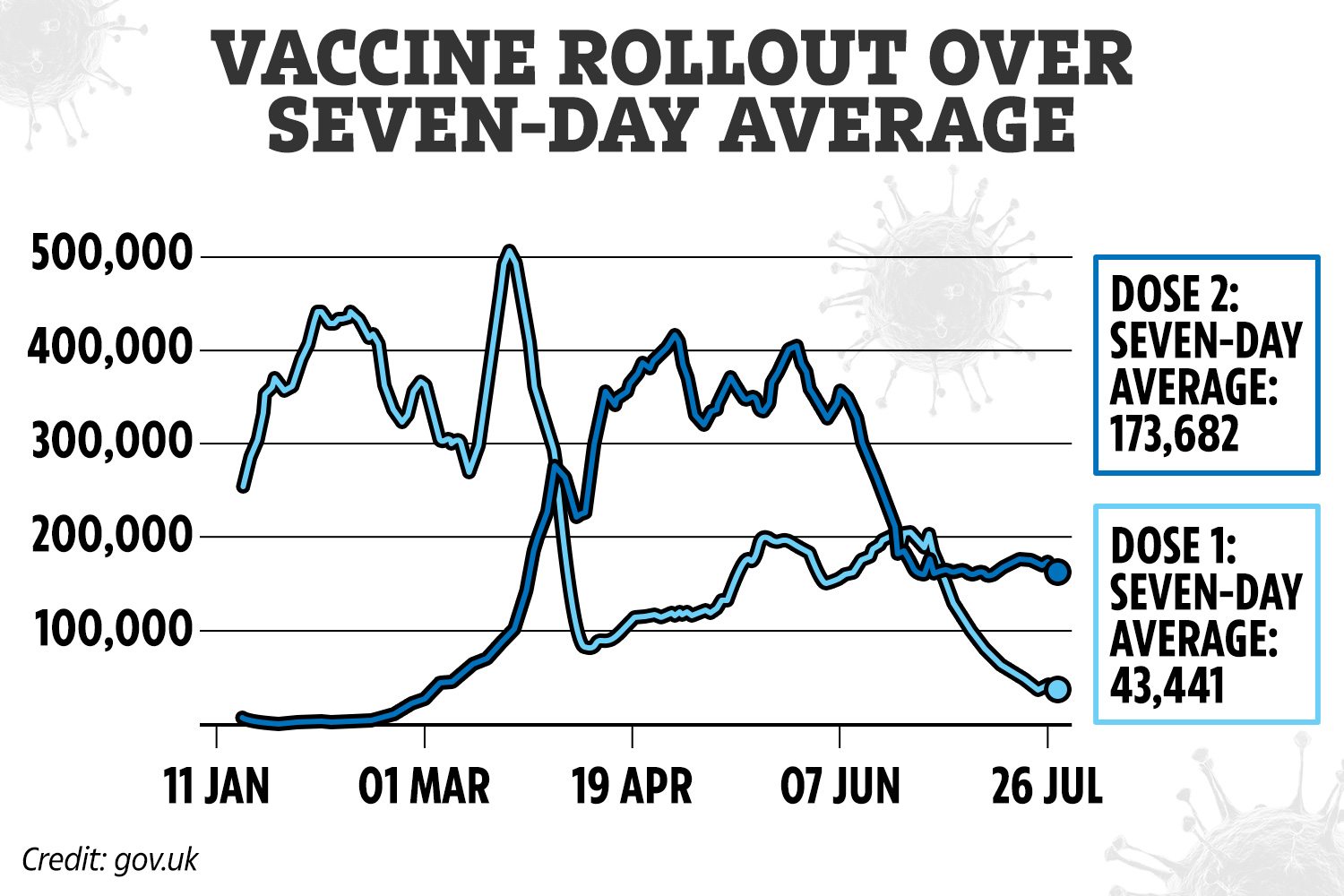 This is the slightly unknown bit, as it's hard to collate information on how exactly everyone is behaving.

But important figures to pay attention to are the surveys asking people what they are doing now we have opened up more.

Now that more mingling is allowed and social distancing is scrapped, it's more important than ever to be aware of how we're behaving to predict the pattern of cases in the future.

One set of results from the CoMix social contact survey up to July 6 didn't show a huge increase in people rushing out to mix.

"Freedom Day" hadn't happened yet but people could mingle more freely and hug, but Brits appeared to be being cautious still, which will help keep the spread low.

Before the pandemic adults had an average of 10 contacts a day, and even with very few restrictions in place, the survey found people were at around 3 contacts a day in July. 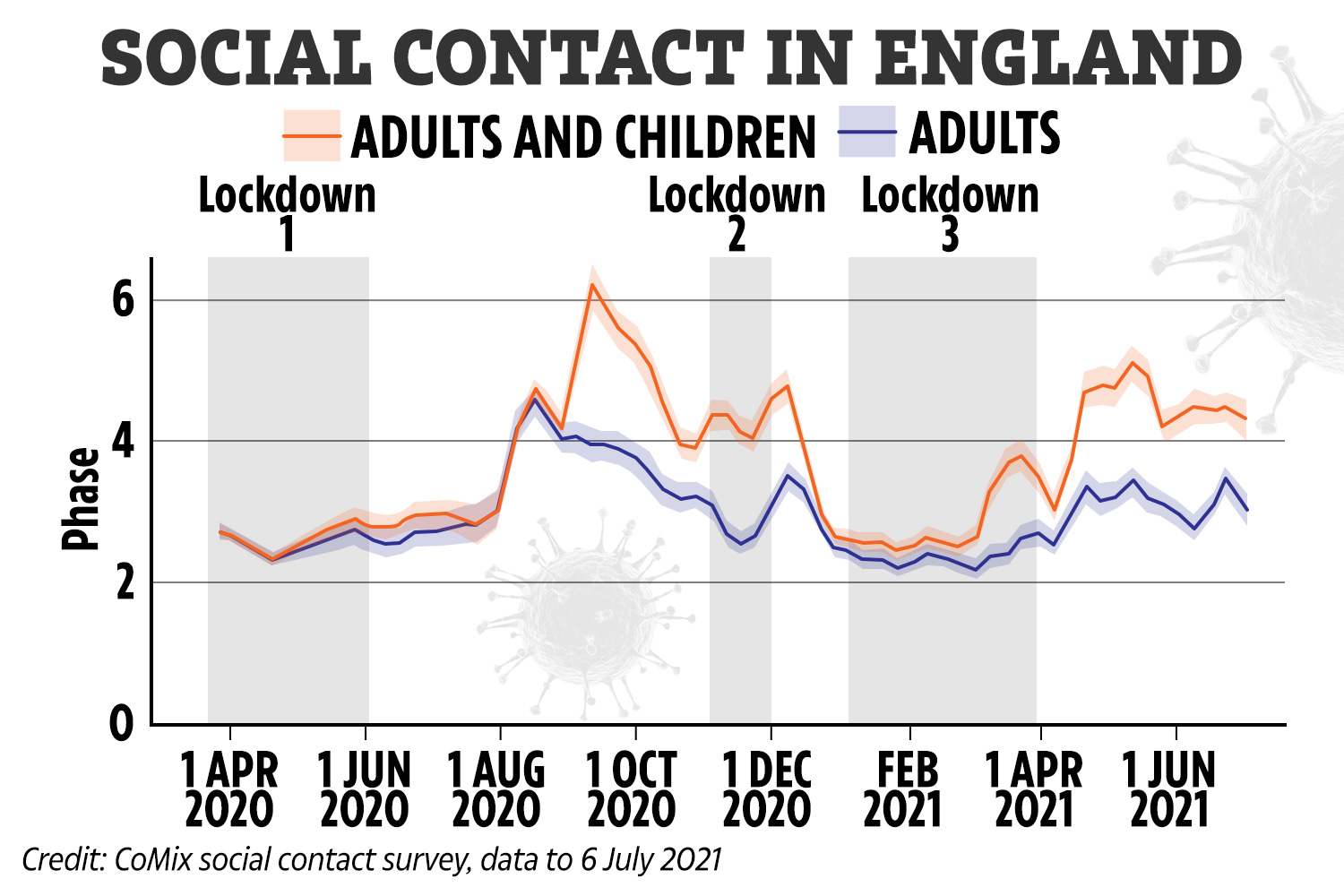 It comes after Professor Neil Ferguson said the UK is finally emerging from the pandemic – with the bulk of cases due to be behind us in months.

Thanks to vaccines, he said "the equation has fundamentally changed".

The expert, dubbed Professor Lockdown, warned his prediction of 100,000 cases a day after England unlocked is still not impossible.

But he said by September or October, the worst of the pandemic should be left behind.