Ah my fellow citizens, you should have seen the dancing and heard the noise! Melbourne launched the Arts Centre theatre complex last night with a party that the guests will talk about to their grandchildren. 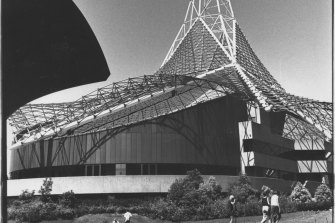 What a surprise it was. It was such a surprise that we who were there didn’t know at first what was happening. Two thousand of us were sitting in the red-plush State Theatre, applauding the final bows and curtsies of the dancers in ‘Sleeping Beauty’. The time was about 11 pm. We all knew that some sort of celebration was on the cards, but nobody was prepared for the way it happened.

Suddenly, the scenery flew up to the roof, and the magnificent stage at the State moved backwards and locked itself in place to create a vast emptiness. And then the ceiling above our seats opened, and glitter fell all over the theatre. People began to laugh and chatter.

And then the fire doors of the stage opened, revealing an even larger space, and more than 1000 people danced in, led by a band. Well. We knew by now that here was a fair-dinkum party, not just drinks and speeches. But who one earth were those people on stage? Where had they come from? They were all done up to the nines, as we were, the audience.

We learned later that we were looking at the audiences from the other theatres in the complex, the Playbox and the Studio, where the programs had finished 10 minutes earlier than ours. They had been told what to do, which was simple enough: they just had to congregate out of sight on the State’s stage and dance into view when someone gave a signal.

Strike me pink – I hope I’ve got all this in the right sequence – steps then appeared leading to the stage, and the 2000 of us who so far were only spectators were invited to go up and dance.

And do you know that enormous scissor-lift contraption backstage that carries semi-trailer loads of props? This got into the act too. It came up from Sturt Street carrying what someone told me was the Channel 9 dance band. This is absolutely plausible. The entire Coldstream Guards could get on that lift if they wanted to.

Well. What can we say? The champagne flowed and we danced the night away, those of us who could find the room.

Did I mention that at some point early in this festivity, three people made speeches? Good ones, too, from Ken Meyer, chairman of the Arts Centre Trust, Race Mathews, Minister for the Arts, and John Cain, the Premier.

This must have been a tremendous occasion for Ken Meyer, who joined the Arts Centre building committee (before the trust existed) 28 years ago. Twenty-eight years! A whole generation ago. And here, in a crowded theatre was the culmination of his time and effort.

As he looked at the stage, did the though cross his mind that it is one metre below the water level of the Yarra? Probably not. This was just one of the many engineering feats that the building committee, the architects and the engineers accomplished. They were given a terrible building site, the base of which was ooze. Remember the 1200 steel pipes they drove into the bedrock 25 metres further down?

Another person I felt happy for was George Fairfax, the trust’s general manager, who has been with the Arts Centre in different capacities for 15 years. My God, what a lot he’s seen, and what a lot of setbacks he’s overcome. But the public only sees him as urbane and smiling.

He was a distinguished actor, you know. Did it cross his mind last night that this was the only place for an actor to be, this site that drips with the history of entertainment in Melbourne. It was to here, in the 1870s, that travelling circuses came. It was here that Melbourne had the permanent circuses, Fitzgeralds and Wirths, and then a jazz pavilion, a dance hall, and a roller skating rink.

What an arresting coincidence it is that Roy Grounds, aged 16, once played the part of a Boy Scout in a 1922 production at a theatre opposite the stage door of the Melbourne Concert Hall which (along with the other buildings) he later designed.

Was that Sir Henry Bolte I saw in the crowd? My goodness, it looked like him, and there cannot, surely, be two Sir Henrys. Bravo, Sir Henry, it was you who really got this act on the road. There’d been an awful lot of talk between 1942 and 1955, but not much action until you began running the State. And then the Arts Centre took off like a rocket.

Ah! John Truscott! What interiors you gave us. Did you ever stop working on these magnificent buildings? Remember when you couldn’t get enough money out of the trust or the Government or somebody, and you looked at the paltry amount available and went ahead anyway, cutting your cloth to suit your purse, but cutting it in a way that nobody else could have done? I remember once you told me you were thinking of the future generations who would use these buildings. They will applaud.

It is true that you wore out 41 pairs of shoes working on the project? Jim McPherson says so, and he’s as reliable as the sunrise. Jim McPherson. What a tremendous job he’s done as a publicist. He has sold the Arts Centre to the world.

Excuse me. I just saw a couple in love. The man looked like the illustrious Sir Sidney Nolan, and the woman looked like his wife, the former Mary Boyd who is exquisite tonight (isn’t she always?).

Sir Sidney, having seemingly quelled whatever tensions existed over the fact that the Arts Centre didn’t hang his desert painting last Friday, is having the time of his life. Sir Sidney’s name will be linked to the Arts Centre for as long as it stands, if only because he once scrawled five or six words on a piece of paper and thus handed to it, absolutely free, his famous ‘Paradise Gardens’, consisting of 1620 paintings depicting the evolution of Australian flowers.

Sir Sid says he’s thinking now about another epic, 1600 paintings of Australian villains, who will include no Irish.

Nelli Shkolnikova, the violinist, was there last night, with bells on. I don’t mean bells that go ding-dong-ding, but bells that go dingalingaling and hey-nonny-no, if that’s the sort of thing one can say about this distinguished Russian woman. Having defected from Europe, she found happiness in Melbourne as the Arts Centre’s first artist-in-residence, and there isn’t a student at the Melbourne College of the Arts who doesn’t love her.

Daryl McFall was keeping his same modest profile last night. He doesn’t get in the news much, but his is unquestionably a great hero of the Arts Centre’s development. He is the project architect, the man who inherited Sir Roy Ground’s cloak. It is McFall, the partner in charge at Suendermann, Douglas McFall Pty Ltd, who led the people who solved the problems that sometimes seemed insuperable.

Ah well. I don’t think we’ll see a party again such as last night’s. We’ve had a few parties at the Arts Centre during its development, but last night’s was the pinnacle. We were not celebrating just the official opening of the theatres, we were celebrating the whole beautiful thing. Last night we were saying: “Here we are! We’ve finished it! It has taken 42 years and cost $225 million – and look, we have finished.”

God bless all those people with sore heads today. It was worth it, wasn’t it?