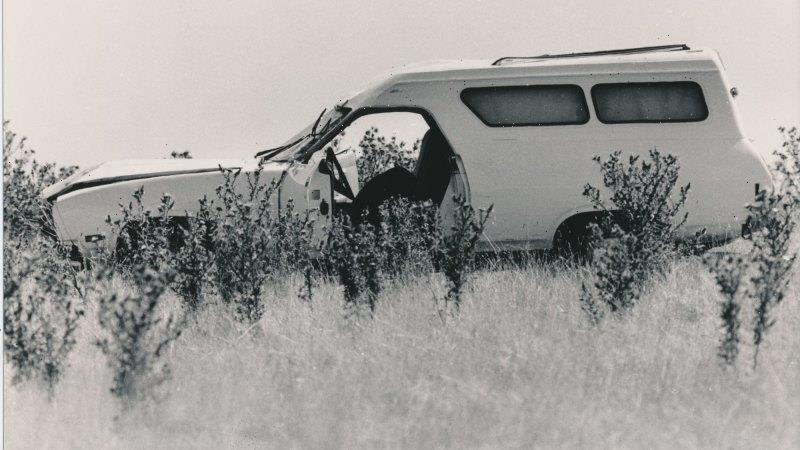 The death of Pavel Vasilof Marina, who shot and wounded six police before being killed by a police shotgun blast, was a case of justifiable homicide, the city coroner found yesterday. 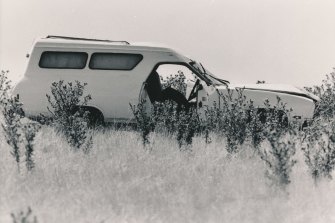 ‘Mad Max’ Pavel Marinof’s Ford panel van in a paddock near Kalkallo after the shootout.Credit:Geoff Ampt

The decision of Mr Hal Hallenstein marked the end of a police headache which began 14 months ago when, in one night, Marina —better known as Max Clark, or “Mad Max” — shot four policemen.

In the following days, residents around Clayton, Cheltenham and Noble Park stayed in their homes and children missed school as police hunted for the gunman. When he eventually was traced by detectives in February this year, two more police were wounded in a gun-battle outside Melbourne in which the fugitive was shot dead.

The coroner said the fatal shot, fired by a seriously wounded crime squad detective, was a courageous act. Clark, he said, was a dangerous and violent man who had had an armory in his vehicle.

Clark had been wearing a brown wig and had grown a full beard and had looked nothing like the photographs police had. The coroner said Clark had shot both detectives before one managed to fire back. 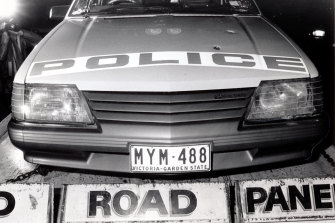 The inquest, which lasted 1 ½ days, was told that some time after the shootings last year, Clark had gone to Queensland and had come back with a healthy looking suntan. In November, he had befriended a Wallan man and had bought a motorcycle from him. Later, the man had helped Clark buy a panel van in a false name. Clark had spent several nights at the man’s Wallan house.

It was in Wallan that Clark had probably manufactured a breech block for a stolen sub-machinegun which, when tested by police, fired 200 rounds faultlessly. Clark had also sold a handgun to the Wallan man and had offered to sell him others.

Detectives believe that Clark might have been surviving on the run by dealing in firearms. Shortly before Clark was shot dead, police received telephone calls from two informants who had said Clark was dealing in guns.

One informant had said Clark was renting and selling firearms for use in armed robberies. The other had said Clark had a machine-gun as well as other firearms in his possession. 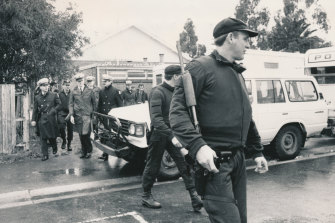 The owner of the Wallan house said that when Clark had used the workshop, he had kept one gun tucked into the back of his trousers and a second had usually been hidden under a rag nearby.

Police believe that Clark might have been involved in a robbery at an army commando base in Williamstown on 12 November in which 14 machineguns were stolen. None had been fitted with a breech block.

Detectives also believe that Clark might have helped dispose of the stolen machineguns. During their investigations, they had heard rumors that Clark had been a gun-dealer for some time, possibly supplying a motorcyle group.

At an engineering company near the plastics factory where he once worked, Clark had used lathes and other machinery in his spare time, probably to modify firearms.

At his previous employers, a motor manufacturing company, Clark had shown close workmates guns which he had modified on the company’s machines.

According to detectives, Clark was a man who dealt with, played with, modified, bought, sold and swapped guns. At his house in South Clayton, police found rifles, handguns, various gun parts and several homemade silencers.

Clark had drawn a map of the underneath of his house and in places marked on the map had buried many parts for guns. About 7000 rounds of ammunition were found under the house. Most of the firearms had their serial numbers filed off, making them impossible to trace.

But many police questions on the Clark case remain unanswered. A seventh shooting of a uniformed officer on 12 October 1982 at Oakleigh was probably the work of Clark.

A factory burglar who had used the same methods as Clark shot off a police constable’s thumb with a .45 pistol after being challenged. Investigators had wanted to question Clark about that incident.

Clark’s last two victims, Detective Sergeant John Kapetanovski and Senior Detective Rod MacDonald, who are both back at work, said yesterday they were pleased with the inquest result and glad that the Clark investigation was over.