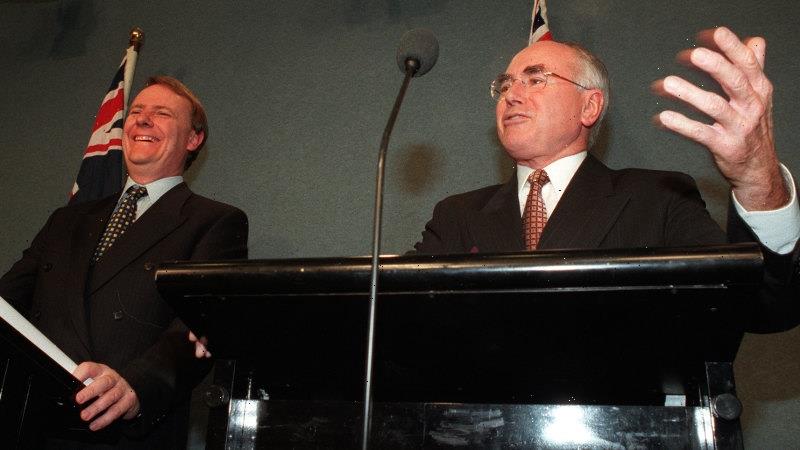 Prime Minister John Howard declared yesterday he had put his “head on the block” to secure tax reform, signalling he will wear the blame if the system introduced today fails to deliver a stronger and fairer nation. 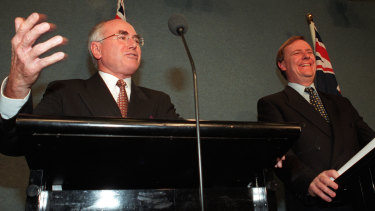 After coming to a compromise agreement on the GST with the Australian Democrats, John Howard and Peter Costello hold a media conference.Credit:Peake

In an 11th-hour media blitz, Mr Howard predicted that voters would deliver a positive verdict on the GST by Christmas, effectively conceding that his leadership was on the line.

“The reason I have done this and I have taken the risk and I have put my head on the block, and accept it, is that I believe it is good for the country,” he told Brisbane radio. “I’ve invested a lot in it, not for some kind of ego trip of my own.”

In an interview with The Age, Mr Howard said: “If the colleagues want me to lead them into the next election, I will. I’m in their hands, completely.” 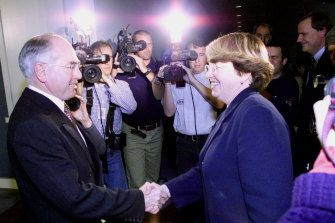 More than 20 years after first advocating tax reform, five years after saying a GST would “never ever” be Coalition policy and almost three years after embarking on the “great tax adventure”, Mr Howard insisted that politics would not be the same in Australia.

A new 10 per cent tax now applies to most goods and services, although basic food, health, education, child care and exports will be tax-free. The GST will replace the 1930s wholesale sales tax.

The government will pay $12 billion in income tax cuts – with 80 per cent of taxpayers having a top rate of 30 per cent. Families with children will gain extra tax breaks worth $2.4 billion, pensions will be increased by 4 per cent, rent allowance rises by 10 per cent, and retirees will be eligible for a savings bonus. 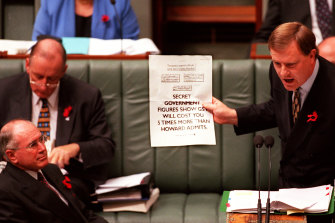 The headline company tax rate today falls from 36 to 34 per cent, provisional tax will be replaced by the new pay-as-you-go system, the tax on diesel fuel will be cut by 24 cents a litre and first-home buyers can receive a $7000 rebate.

The deal also overhauls federal-state relations with the states receiving the entire proceeds of the GST, estimated to be worth $24 billion in year one, even though the Federal Government will wear any political blame.

Democrats leader Meg Lees – who rescued Mr Howard’s tax dreams last year by delivering her party’s support in the Senate in exchange for the exemption of basic food – yesterday predicted the GST ”will raise billions more than forecast”.

Before his departure on Monday for centenary of Federation celebrations in London, Mr Howard has followed a televised address to the nation with more than 10 media interviews. He plans to highlight price reductions under the system at a Sydney shopping centre today.

Despite the Coalition’s original plans being changed by the Democrats, Mr Howard, who this week described himself as the “unashamed architect” of the tax package, yesterday pledged that he would not seek to extend the reach of the GST in contrast to Labor’s undefined promise to roll it back from political hot spots. “We’ve got it in this form. We don’t intend to tinker with it,” Mr Howard said. “We don’t intend to revisit it. I don’t think anybody wants it rolled back.”

Opposition Leader Kim Beazley said yesterday Australians would pay more in GST than they received in tax cuts. “In many ways the best day for the GST is day one because the tax on services tends to be quite slow to be felt by the population generally,” Mr Beazley told The Age. “It takes a while for bills to come in for electricity and gas.”

Insisting that Labor would not decide on how to roll back the tax until close to the next election, Mr Beazley said: “There’s going to be so many twists and turns over the next year or so, we’ve just got to sit down and take a look at where the worst impacts are and get a policy together around it.”

While Mr Beazley beat the GST by buying “a couple of books” and some processed food yesterday, Mr Howard urged shoppers to compare their new and old supermarket bills. “You may find that things are not as bad as you have been told by some people who want to scare the daylights out of everybody.

“If this goes as I believe it will, we will have the feeling that we have against a lot of odds and enormous risk done something that’s unpopular in the short term but to the long-term benefit of the country,” he said.