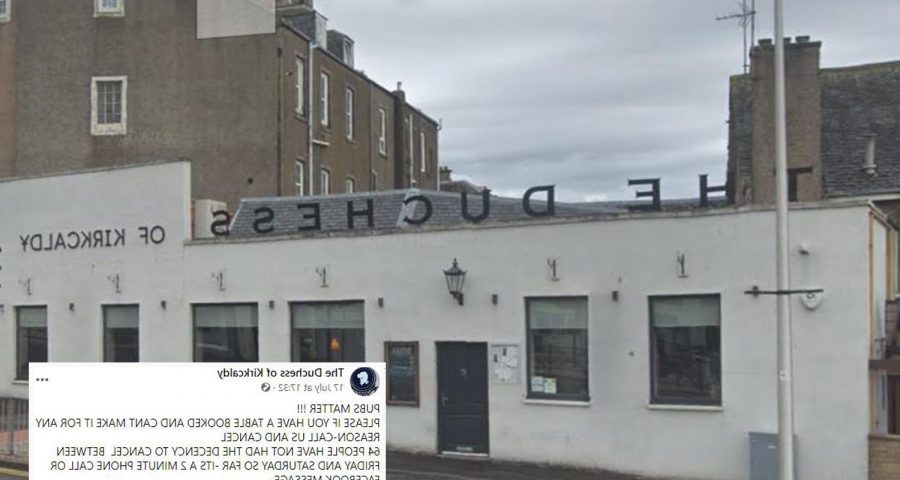 A PUB boss lost almost £5,000 in takings after a whopping 64 no-shows in just two days.

Dallas Mackey, who runs The Duchess of Kirkcaldy, Fife, was left fuming after punters failed to turn up for their bookings on Friday and Saturday.

The customers didn't contact the venue to let them know they could no longer make it, meaning staff couldn't rebook their tables.

Dallas estimates the empty seats cost her business between £4,000 and £5,000 after calling in extra staff to cover the parties.

The publican posted on Facebook: "Pubs matter!!! Please, if you have a table booked and can't make it for any reason – call us and cancel.

"64 people have not had the decency to cancel between Friday and Saturday so far.

"It's a two minute phone call or Facebook message. Pubs can't stand the loss of wages with no revenue!

"If you love your pub, please do your bit."

Dallas said many businesses have been crippled by Covid, with her own pub only able to open for three weeks between March 2020 and May this year.

She will now ask for a £10 deposit from all customers.

It takes a second to pick up the phone but people don't understand the repercussions.

Dallas said: "I have their names and numbers and when I have called a few of them they have said 'oh I meant to cancel' and one of them started coughing down the phone saying they had Covid, but I said they could still cancel even if that was the case.

"It takes a second to pick up the phone but people don't understand the repercussions.

"On Wednesday night, we had nearly 70 covers between 5 and 7pm.

"I brought in extra staff in the kitchen, behind the bar, and on the floor, and then 32 people didn't turn up.

She continued: "Don't get me wrong we did manage to fill some of the tables, but there were at least 28 people booked for drinks on Saturday who didn't show up.

"I'm keeping bar staff here for parties of six and eight coming in and then people aren't coming.

"Many businesses have been crippled because of Covid, but people think they will be the only one not to show up so it's okay.

"Staff wages still need to be paid because they are here."

Another pub in Kirkcaldy, O'Connells, experienced similar problems with repeated no shows.

Manager Eamonn Thompson said: "We had approximately five to 30 no-shows on Saturday – nothing as bad as The Duchess, although it is still damaging.

"We started taking deposits when we opened back up again after lockdown, taking a £20 deposit per table which then comes off the final bill.

"It secures the table and it helps the customer to honour the booking.

"We have a ladies night in August which we are taking deposits for and we have deposits for larger tables – for six or eight people.